The United States government shut down on Saturday, after members of Congress failed to reach an agreement on the divisive issue of immigration and government spending.

In a late-night vote, opposition Democrats in the Senate joined to block a bill that would have kept the government running for another four weeks.

The shutdown comes exactly a year after Donald Trump took his oath as US president.

On social media, Trump lashed out at the opposition for the impasse, saying the Democrats “want a shutdown in order to help diminish the great success of the tax cuts, and what they are doing for our booming economy”.

Just a few hours earlier, the president had praised the Senate’s Democrat leader Charles Schumer for an “excellent preliminary meeting” to avert the shutdown.

Democrats had tried to get concessions from Republicans, particularly on the extension of the immigration programme protecting young immigrants from deportation, which is set to expire in March.

Saturday’s shutdown is only the fourth government closure in 25 years.

Essential government offices and services including the military, the border patrol, air traffic controllers and the FBI, however, will remain in operation until there’s an agreement.

“It’s not as if the public is going to see a massive impact right away,” Al Jazeera’s Patty Culhane, reporting from the capital Washington, DC, said.

“But it is politically damaging, and that is what we are seeing from the statement from the press secretary,” Culhane said.

Culhane said that senators are still working on an alternative agreement. But even if a deal is reached, it would still need to pass in the Republican-controlled House of Representatives. Until then, the shutdown continues. 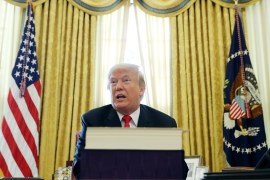 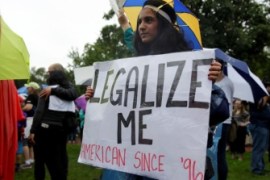 What future do US immigrants have under Trump?

The Stream explores recent debates about immigration policy in the United States, including changes to the TPS and DACA residency programmes.