A Sunni Muslim scholar has been sentenced to death in Lebanon for his role in the death of dozens of people during clashes in the city of Sidon four years ago, according to officials.

Ahmed al-Assir, who was arrested in 2015, was tried in a military tribunal along with 38 others accused of killing Lebanese soldiers in the southern city in June 2013.

The court on Thursday also sentenced to death two other defendants and five people who remain at large, including the scholar’s brother.

Former singer Fadel Shaker, who was tried in absentia, was sentenced to 15 years in prison, while the other 30 defendants were handed life sentences.

The charges were in connection with clashes between al-Assir’s supporters and the army that broke out in Sidon on June 24, 2013.

Eighteen Lebanese soldiers died, along with 40 of al-Assir’s supporters and two civilians.

Al Jazeera’s Imtiaz Tyab, reporting from Lebanon’s capital, Beirut, said the two-day battle of Sidon between the Lebanese army and al-Assir’s supporters was “one of the earliest and bloodiest spillovers into Lebanon” from the civil war in neighbouring Syria.

Tyab said al-Assir was “relatively unknown” before the Syrian conflict started in 2011, but “rose to prominence quickly for his fiery speeches on TV criticising Hezbollah for its support of Syrian President Bashar al-Assad and praising the opposition”, including fighters linked to al-Qaeda.

In 2014, the judiciary issued a warrant for his arrest for “forming an armed group with the objective of committing acts of terrorism and killing or attempting to kill Lebanese soldiers”.

After two years on the run, the scholar was arrested in August 2015 at Beirut International Airport as he attempted to escape with a fake passport and altered appearance.

Capital punishment is legal in Lebanon, but there has been an effective moratorium in place for more than 10 years, without any executions carried out despite judgements to that effect.

“Under Lebanese law, any execution order must be approved by the president,” Tyab said, adding that al-Assir’s fate was unclear.

“Capital punishment hasn’t been used here since 2004, and although Ahmed al-Assir has very little obvious support across Lebanon, President Michel Aoun likely doesn’t have the sort of political backing he needs in order to carry out such a punishment,” he said.

Paul Salem, senior vice president for policy and research at the Middle East Institute, said he did not believe al-Assir’s conviction and probable execution would have a big impact on Lebanon’s often precarious political balance.

“Whether he is executed or not we will see. But either way, I don’t think it will have major ripple effects in the country or on the political system,” he told Al Jazeera from Washington, DC.

“He doesn’t have wide support, and this type of movement in Lebanon – even among the Sunni community, while they revile what Assad and his allies are doing in Syria and while there is a lot of passion against Hezbollah – there is very little appetite for this kind of … radicalism – particularly if it takes on the Lebanese army and state.”

Cleric wanted over deadly clashes with the army is reportedly arrested at Beirut airport as tried to flee the country. 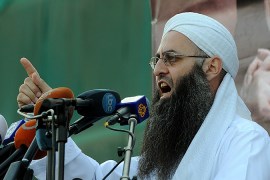 Who is Lebanon’s Ahmed al-Assir?

The firebrand cleric at the centre of recent sectarian violence in Lebanon has seen a rapid rise to prominence. 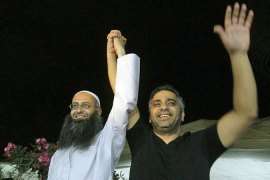