As the conflict in Syria enters its seventh year, the civil war has left many parts of the country in ruins, killing more than 465,000 people, and displacing some 12 million Syrians from their homes.

Amid a wave of protests across the region known as the Arab Spring, longtime rulers in Tunisia, Egypt, and Libya were successfully toppled in 2011. But in Syria, peaceful demonstrations quickly turned into a full-fledged war between government forces and opposition armed groups that sought to overthrow the regime of Syrian President Bashar al-Assad.

Years later, and following several rounds of internationally brokered peace talks, the war in Syria is still ongoing, with the Islamic State of Iraq and the Levant (ISIL, also known as ISIS) group fiercely fighting for its last stronghold in Syria.

Although fighting continues in many areas in Syria, three provinces stand out as confrontation zones – Deir Az Zor, Idlib and Raqqa.

Backed by Russian air strikes, Syrian government forces broke the ISIL siege of two enclaves in and around Deir Az Zor in September 2017. The city had been encircled by ISIL group fighters for nearly three years.

The loss of Deir Az Zor would be a major blow to ISIL, whose territory in Syria and neighbouring Iraq has been significantly shrinking over the past year. 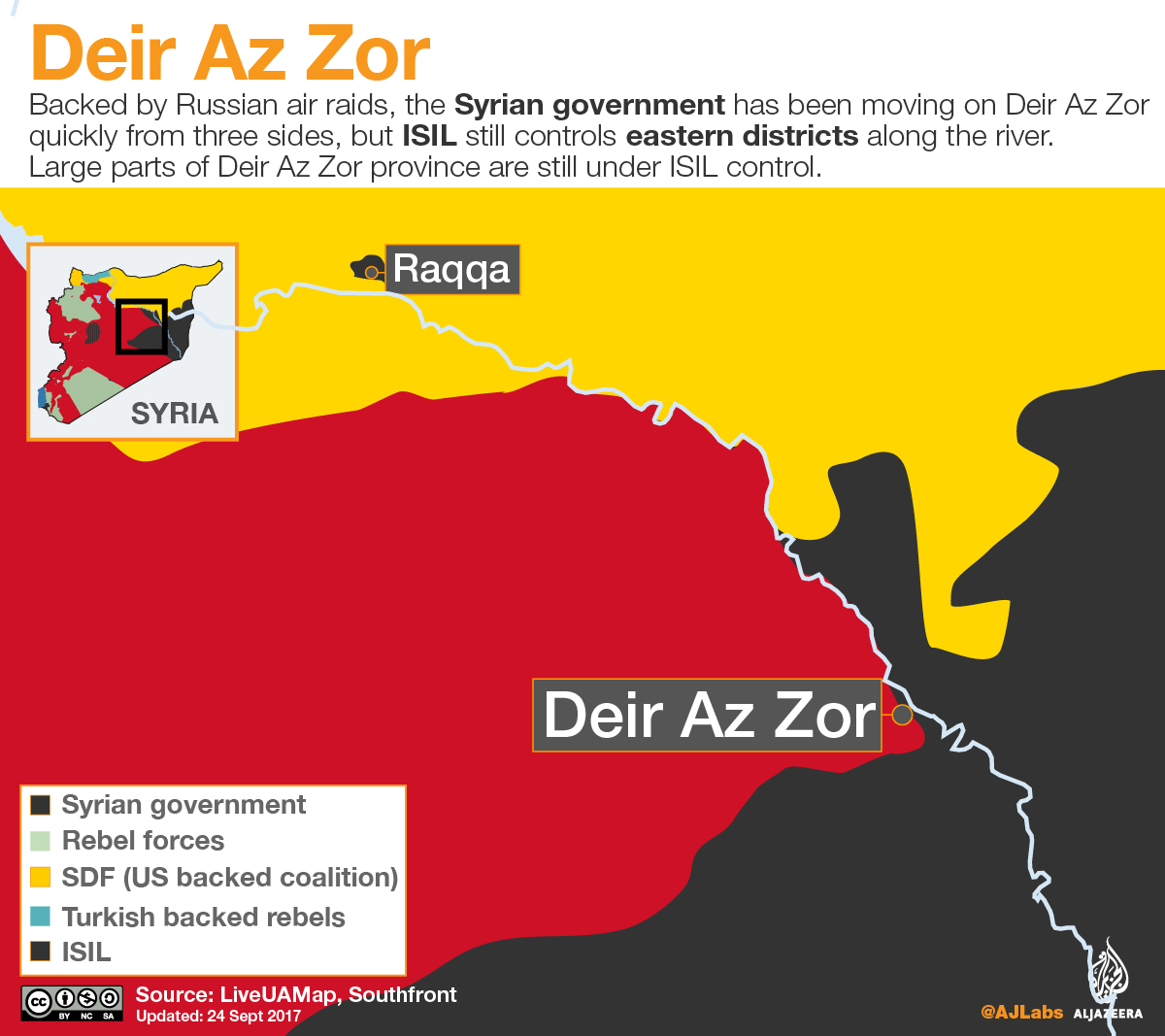 Since Syrian government forces recaptured Aleppo in 2016, a new military alliance of armed opposition groups was formed in northern Syria. Idlib is mainly controlled by Hay’et Tahrir al-Sham, an alliance of anti-government groups formed in January and linked to al-Qaeda. It is led by Jabhat Fateh al-Sham, formerly known as al-Nusra Front. The alliance seeks to consolidate power in Idlib and parts of the surrounding provinces.

Iran, Russia and Turkey announced in September they would jointly set up de-escalation zones for a period of six months in the provinces of Idlib, Homs, Latakia, Aleppo, Hama and the Eastern Ghouta. 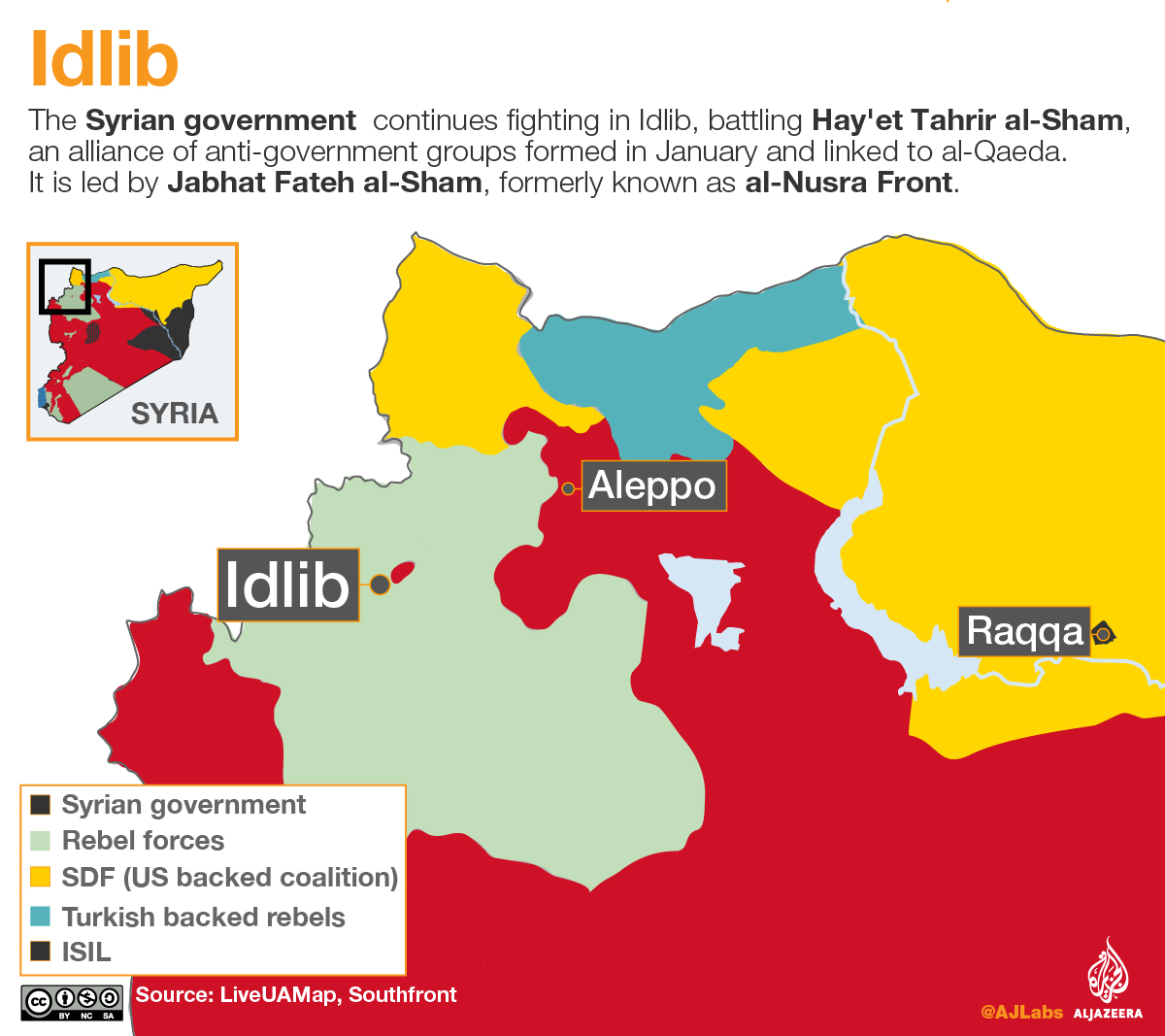 Raqqa is one of the last and most important remaining ISIL strongholds. The offensive to capture Raqqa was launched in November 2016, led by the Syrian Democratic Forces (SDF) – the US’ closest ally in Syria.

An international coalition backed by US forces has helped the SDF to regain control of the province’s Old City and several neighbourhoods. To date, they have captured more than 60 percent of Raqqa city and most of the surrounding northern province.

ISIL is now surrounded in small parts of the city, and the fall of the capital of the self-proclaimed Islamic State seems imminent, according to the United Nations. 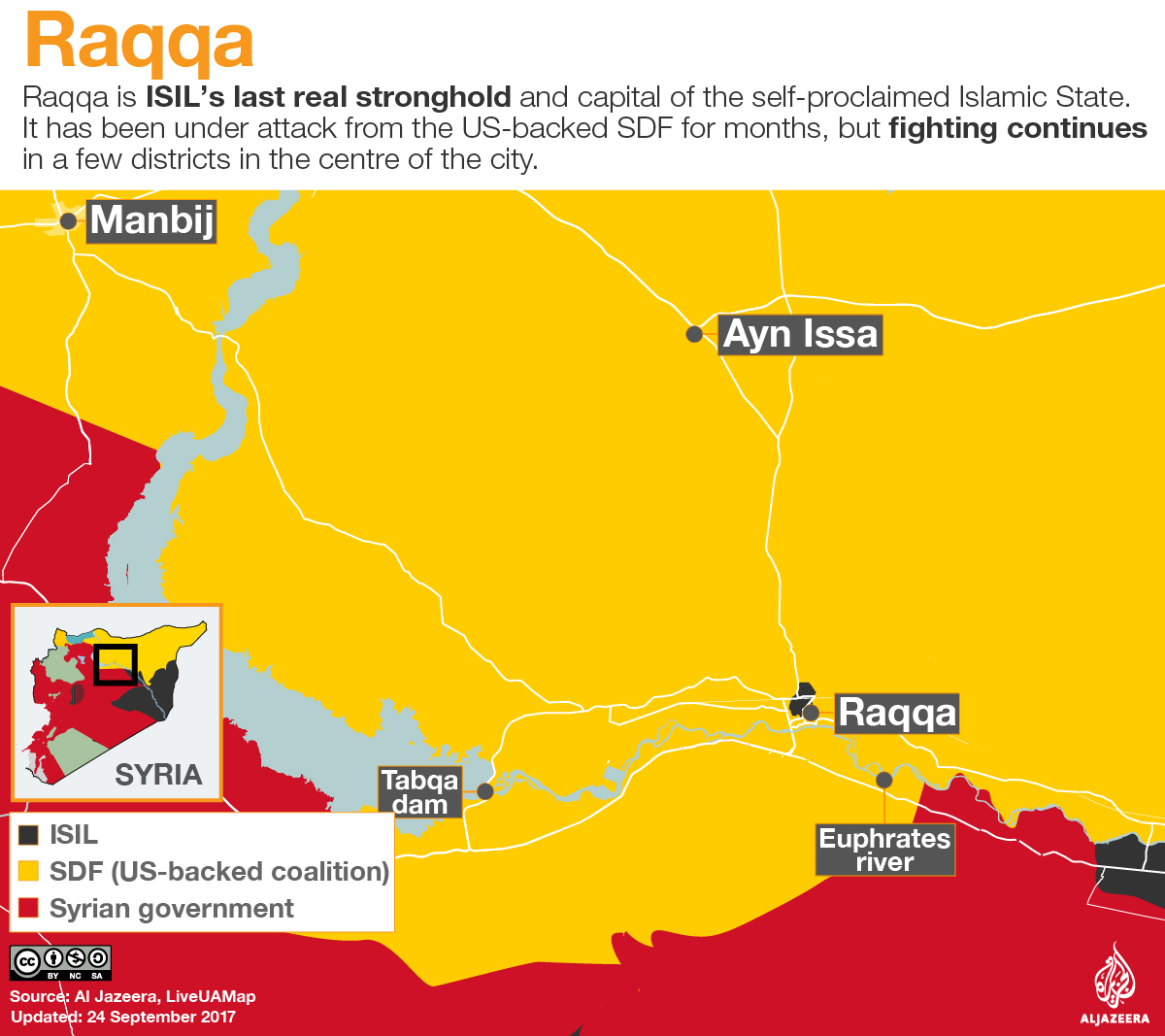