A ban on plastic bags came into force Monday in Kenya and those found in violation of the ban could be given a maximum fine of $38,000 or serve a four-year jail term.

The ban applies to the use, manufacture, and importation of plastics and gives a minimum fine of about $19,000 or a year’s imprisonment, according to the Kenyan government.

Exemptions were made for those producing plastic bags used for industrial purposes.

They have created towering piles at dump sites.

Cameroon, Guinea-Bissau, Mali, Tanzania, Uganda, Ethiopia, Mauritania and Malawi are among African countries that have adopted or announced such bans.

Some 100 million plastic bags are handed out every year in Kenya by supermarkets alone, according to the UN Environmental Program.

The Kenyan government says the bags harm the environment, block sewers and do not decompose.

UNEP said the bags have long been identified as a major cause of environmental damage and health problems, killing birds, fish and other animals that mistake them for food.

Plastic bags contribute to the 8 million tonnes of plastic that leak into the ocean every year. At current rates, by 2050 there will be more plastic in the oceans than fish, according to UNEP. 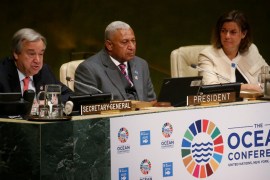 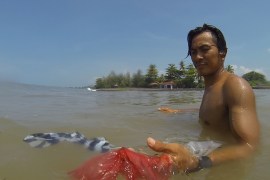 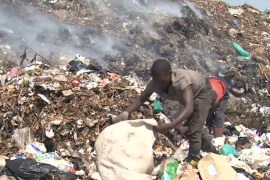 Poles for construction and road signs, made from used plastic in a new technique, slowly changing country’s landscape.