A man who allegedly killed himself in the US city of Los Angeles last week was an important witness in a sweeping corruption investigation in Indonesia.

He was pronounced dead on Thursday of a self-inflicted gunshot wound to the head after a standoff with police, according to the Los Angeles County coroner’s office.

Last month, Marliem had been in contact with Indonesia’s Witness and Victim Protection Agency (LPSK) on several occasions and also told media he had evidence in the form of digital recordings of his dealings with Indonesian politicians implicated in the scandal.

“He said he was rather scared because he had 500 gigabytes of evidence,” LPSK deputy chairman Hasto Atmojo Suroyo said.

Marliem was offered protection but had not formally applied for it, Suroyo added. “He asked for clarification on how to apply, but then he suddenly died.”

Marliem’s company, PT Biomorf Lone Indonesia, won the tender to supply automated fingerprint identification technology in a case that dates back to 2009.

Indonesian anti-corruption police allege that a network of about 80 people, mostly politicians, and several companies used the introduction of a $440m electronic identity card system to steal more than one-third of the allotted funds.

The Corruption Eradication Commission (KPK) has already named the parliamentary speaker, Setya Novanto, as a suspect in the investigation into the ID card scandal and is targeting at least 37 people including politicians and officials.

Novanto told reporters on Tuesday there was no truth to the accusation that he stole more than $40m.

Los Angeles SWAT officers found Marliem’s body inside his home around 2am (09:00 GMT) Thursday after he held police at bay for more than nine hours. A woman and child left the house unharmed after the standoff began Wednesday evening.

The KPK said on Saturday Marliem’s death would not derail its investigation and Indonesian police have said they are working with the FBI to investigate his death. 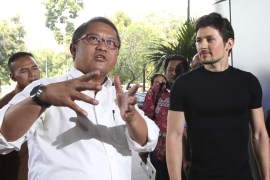 Indonesia and encrypted messaging service Telegram set procedures to stamp out ‘terrorist propaganda’ on the platform. 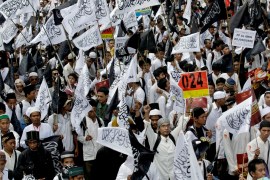