Myanmar is imposing new curfews and deploying more troops to Rakhine state, the government confirmed on Saturday, after the United Nations expressed alarm at reports of a military build-up in the region where authorities are accused of widespread rights abuses.

News that an army battalion was flown into Rakhine this week to boost security met criticism from UN special rapporteur Yanghee Lee on Friday, who warned it was “cause for major concern”.

The army campaign sent more than 70,000 Rohingya villagers fleeing across the border to Bangladesh, carrying with them stories of systematic rape, murder and arson at the hands of soldiers.

The Rohingya are a stateless group, long-maligned by Myanmar’s Buddhist majority, and the UN believes the army’s crackdown may amount to ethnic cleansing – a charge the government vehemently denies.

State media said Saturday that “clearance operations are being heightened” in Rakhine’s May Yu mountain range, an area where the government says Rohingya fighters remain active.

The army used the same language to describe counterinsurgency sweeps in October.

“Plans are under way to reinforce security forces and military forces by deployment of additional troops,” the state-run Global New Light of Myanmar said, adding curfews would be imposed in “necessary areas”.

The goal was to “prevent extremist terrorists from taking a stronghold in the May Yu mountain range”, the state mouthpiece said.

The military build-up comes after a rise in violence in recent months with dozens of villagers killed and abducted by masked assassins.

The government blames the killings on the rebel Arakan Rohingya Salvation Army, which claimed the raids on police posts last October.

Rohingya communities in the remote area also continue to be raided, with security forces firing “warning shots” during a face-off with a mob of villagers earlier this month.

“The government must ensure that security forces exercise restraint in all circumstances and respect human rights in addressing the security situation in Rakhine State,” she said in a statement.

WATCH: Thailand: Verdict for 103 who buried Rohingya in mass graves

Buddhist-majority Myanmar has long faced criticism for its treatment of the more than one million Rohingya, who are denied citizenship and struggle to access basic services.

The minority are widely reviled as illegal migrants from Bangladesh, despite having lived in the area for generations.

A government-appointed commission in the country has dismissed allegations of widespread abuses, while Myanmar is refusing to allow a UN fact-finding team to conduct its own probe. 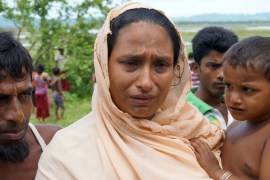 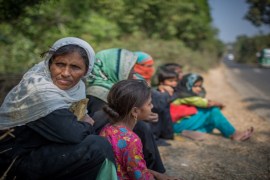 The UN is sending a fact-finding team to investigate alleged human rights abuses against Rohingya Muslims in Myanmar.