Iraq’s influential Shia leader Muqtada al-Sadr has made a rare visit to Saudi Arabia, where he met Crown Prince Mohammed bin Salman and other officials.

Sadr’s office released a statement on Sunday, saying he had been invited to the kingdom.

He was greeted by Thamer al-Sabhan, Saudi Arabia’s former ambassador to Iraq, on his arrival in the kingdom on Sunday.

“We have been very pleased with what we found to be a positive breakthrough in the Saudi-Iraqi relations, and we hope it is the beginning of the retreat of sectarian strife in the Arab-Islamic region,” a statement from Sadr’s office said.

Iraq and Saudi Arabia agreed last month to set up a coordination council to upgrade strategic ties as part of an attempt to heal troubled relations between the Arab neighbours.

Saudi Arabia reopened its embassy in Baghdad in 2015 following a 25-year break.

In February this year, Adel al-Jubeir made a rare visit to Baghdad, marking the first official visit by a Saudi foreign minister to Iraq since 1990.

Iraq lies on the faultline between Shia Iran and Sunni-ruled Arab Gulf monarchies.

Saudi Arabia is concerned about the influence of its rival Iran in Iraq, which backs Shia fighters battling the Islamic State of Iraq and the Levant (ISIL) group there.

Sadr is among those who have called for the Shia fighters to be disbanded.

Sadr, an anti-American Shia leader, commands a large following among the urban poor of Baghdad and the southern cities, including Saraya al-Islam, or Peace Brigades militia. 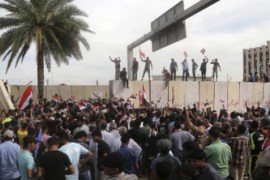 The return of Muqtada al Sadr

Is Iraq’s post-Saddam political order over? 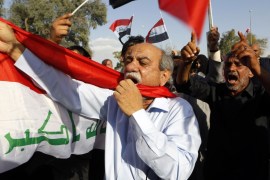 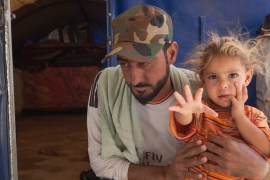 Dozens of families accused of having relatives in ISIL have been forcibly displaced to an ‘open-air prison’ camp.