Qatar has accused Saudi Arabia of politicising the Hajj, claiming Riyadh has imposed restrictions on Qatari nationals planning to travel to Mecca for the annual Muslim pilgrimage.

Qatar’s National Human Rights Commission (NHRC) said on Saturday that Qatari citizens have been told they can only enter Saudi Arabia through two airports and that they must travel via Doha to be allowed in.

This would be challenging for Qataris who do not live in Doha, such as those studying abroad.

The NHRC said it has filed a complaint with the UN special rapporteur on freedom of belief and religion over the restrictions, which it said were in “stark violation of international laws and agreements that guarantee the right to worship”.

The restrictions are part of a boycott launched on June 5 by Saudi Arabia, United Arab Emirates, Bahrain and Egypt, which saw the group sever diplomatic ties with Qatar and impose a blockade. They accuse Qatar of funding “terrorism”, allegations Qatar has strongly denied.

The four Arab states cut transport links with Qatar, and Saudi Arabia has closed the peninsula’s only land border.

As the custodian of Islam’s holiest sites in Mecca and Medina, Saudi Arabia organises the annual Hajj.

The pilgrimage is one of the five pillars of Islam, which every able-bodied Muslim who is able to afford the journey is obliged to undertake at least once in a lifetime.

Hajj is due to begin in early September.

The NHRC said it was “extremely concerned over [Saudi Arabia] politicising religious rituals and using [Hajj] to achieve political gains”.

“The Saudi authorities have allowed the Qatari pilgrims to enter Saudi Arabia only through two airports via Qatar only, thus any Qatari citizen located outside Qatar, must first return to Qatar, then travel to Saudi Arabia,” it said.

The civil liberties group also said that it will lodge a second complaint against Saudi Arabia with UNESCO for subjecting Qatari nationals to harassment and threats in Saudi territory.

During the Islamic holy month of Ramadan, the group claimed that officials in Saudi Arabia forced Qataris who were visiting religious sites to leave their hotel rooms. Unable to fly on commercial flights, which had been blocked from travelling from Saudi Arabia to Qatar, they were forced to use charter flights.

The NHRC said that its complaints were part of a wider effort to highlight Saudi Arabia’s violations of religious freedom and the right to worship, and expose them to the international community. 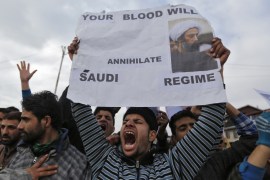 Rights groups urge kingdom to halt executions of 14 men, reporting that at least 66 have been beheaded so far this year.