Writing on Twitter on Tuesday night, Raqqa is Being Slaughtered Silently said the attacks wounded another 50 civilians, adding that the US-led international coalition had carried out at least 41 air attacks in the 48 hours prior.

The activist group said that air attacks and shelling continued overnight in and around Raqqa, the city previously known as the de facto capital of the Islamic State of Iraq and the Levant (ISIL, also known as ISIS) armed group.

The Syrian Democratic Forces (SDF), an alliance of Kurdish and Arab fighters, has been working to encircle Raqqa since November in an offensive backed by the US-led coalition, which is also fighting ISIL in neighbouring Iraq.

The US-led coalition has said that 3,000 to 4,000 ISIL fighters are thought to be holed up in Raqqa city, where they have erected defences against the anticipated assault.

On Tuesday, the UK-based Syrian Observatory for Human Rights said that ISIL only controls less than 10 percent of the Raqqa province, which it used to control in its entirety.

The SDF controls more than two-thirds of the province, while the Syrian government and its allies have taken back some 22 percent of the territory from ISIL.

READ MORE: In Syria’s Jobar ‘death is a central part of their daily lives’

Syria’s conflict started in March 2011 with largely unarmed protests, but it quickly morphed into a full-scale civil war that has left hundreds of thousands dead and created millions of refugees.

The United States, Russia and Jordan reached a ceasefire and “de-escalation agreement” for parts of Syria this month, which has reduced violence. 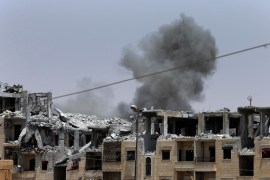 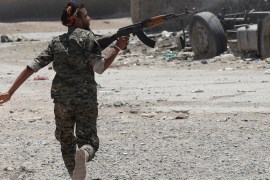 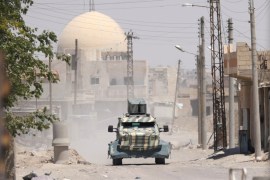 The Syrian Democratic Forces say they have seized the last route to Raqqa, and now fully encircle the city.