Mevlut Cavusoglu, Turkey’s foreign minister, has accused Germany of harbouring “terrorists” after the country stepped up a travel advisory for Turkey and considered slapping sanctions over its arrest of human rights activists.

Germany told its citizens on Thursday to exercise caution if travelling to Turkey, with Sigmar Gabriel, foreign minister, warning that his government could no longer guarantee its citizens’ safety in the face of “arbitrary” mass arrests.

The warning came after Turkey arrested six human-rights activists, including a German national, on accusations of “terrorism”.

Gabriel said Germany would review state guarantees for foreign investment in Turkey, and reconsider its support for billions in European Union financial flows to Turkey.

“As a country providing shelter to PKK and FETO terrorists in its own territory, statements by Germany are just double standards and unacceptable,” he said on Twitter, referring to the Kurdistan Workers Party and the network of the US-based religious leader Fethullah Gulen, blamed by Turkey for last year’s failed coup.

Germany and Turkey have clashed over numerous issues in recent months, including the pre-trial detention of a Turkish-German journalist, Deniz Yucel, and Germany’s refusal to extradite asylum seekers Turkey alleges were involved in the coup attempt.

Gabriel broke off his holiday to deal with the crisis.

He said Steudtner “never wrote about Turkey, he had no contacts in the political establishment … and never appeared as a critic.”

He said any German national travelling to Turkey could suffer the same fate.

Erdogan says the crackdown, in which roughly 50,000 people have been detained and 150,000 sacked or suspended from the judiciary and journalism to academia, was essential after the failed coup.

Many companies have also been seized on allegations of links to “terrorism”.

Gabriel said he could not advise companies to invest in a country without legal certainty where “even completely innocent companies are judged as being close to terrorists”.

“I can’t see how we as the German government can continue to guarantee corporate investments in Turkey if there is the threat of arbitrary expropriation for political reasons.”

Germany still wanted to rebuild relations with its long-time ally, he said, but added that Erdogan’s government must first “return to European values”.

“No one invests in a country … in which the judiciary has been degraded to be a helper of the ruling AKP party,” he said.

Cavusoglu hit back at Gabriel’s remarks, saying threats and blackmail would find no answers in Turkey, and that Germany and Turkey needed to focus on their long-term mutual goals instead.

“We don’t see such threats against Turkey as worthy of a serious country,” Cavusoglu said in Cyprus.

The foreign ministry in Ankara said Turkey would not make concessions on its judicial independence and struggle against “terrorism” “for financial matters such as loans, funds or the [European] Customs Union”.

READ MORE: Germany to withdraw troops from Turkish base

For his part, Ibrahim Kalin, Turkey’s presidential spokesman, accused Germany of “great political irresponsibility” in stepping up its travel warning.

He suggested Gabriel’s remarks were intended to win votes at national elections in two months. “They need to rid themselves of this abdication of reason and think rationally,” Kalin said.

Gabriel’s warnings to private as well as business travellers could deal a blow to Turkey’s tourism industry. So far this year, bookings from Germany have accounted for about 10 percent of Turkey’s tourists.

The German newspaper Die Zeit reported on Wednesday that Turkish authorities had, several weeks ago, handed their German counterparts a list of 68 German companies they accused of having links to Gulen.

They included chemicals manufacturer BASF, which confirmed it was on a list that had been passed to it by German police but declined to comment on the allegations.

Germany was Turkey’s top export destination in 2016, buying $14bn worth of Turkish goods.

It was also the second biggest source of Turkish imports, at $21.5bn. Only China, at $25.4bn, exported more to Turkey. 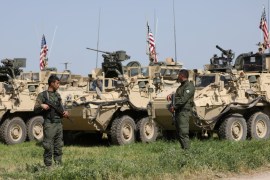 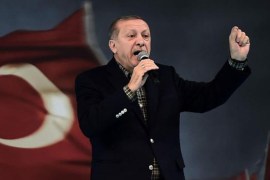