A Jordanian soldier was sentenced on Monday to life in prison after being convicted of killing three US military trainers outside an army base last year.

The military court in Amman found 39-year-old Maarik al-Tawaiha guilty of shooting the trainers as they waited to enter the King Faisal base at Al-Jafr in southern Jordan on November 4.

In Jordan, life in prison can mean 20 years, with time off for good behaviour.

Jordan has ruled out terrorism in the November shooting in which the convoy of the US Army Green Berets came under fire at the base entrance.

The prosecution in June accused al-Tawaiha of “voluntary manslaughter” over the deaths of Matthew Lewellen, Kevin McEnroe and James Moriarty.

He was also charged with “insulting the dignity and reputation of the armed forces and violating military orders”.

During the month-long trial, he watched the proceedings silently while standing in a cage in the court.

He did not react when the judge announced the verdict and the maximum possible sentence, life in prison with hard labour. When he was led out of the cage, he said: “I have all the respect for the king, but I was doing my job.”

The defendant has said he felt no animosity towards Americans and opened fire because he believed the base was coming under attack.

However, relatives of the slain US troops have described security camera footage that they say shows him shooting for six minutes, reloading and aiming at the Americans, even as they identify themselves as friendly forces.

Relatives of two of the US soldiers sat quietly as the judge read the ruling.

Charles Lewellen, 53, whose son was killed, later told the Associated Press that the verdict “won’t take the pain away” but that it proved “what we have been saying all along … that he murdered our sons”.

Some of the relatives criticised Jordan’s handling of the case and said the defendant should have received the death penalty. Jordan allows the death penalty, but it is usually handed down in terrorism cases or in a murder coupled with another crime.

The trial “confirmed that the deceased US service members followed all established procedures when accessing the base the day of the incident, as we have noted before,” the US Embassy in Jordan said. “We are reassured to see the perpetrator brought to justice.”

Jordan, which hosts some 2,200 American military personnel, is a key American ally and a member of the US-led coalition fighting the Islamic State group in neighbouring Syria and Iraq.

US forces have trained a small group of vetted Syrian rebels in Jordan, and American instructors have also trained Palestinian security forces inside the kingdom.

At the trial, al-Tuwaiha and some of the gate guards testified they heard what might have been a pistol shot coming from the direction of the US convoy. Al-Tuwaiha said he opened fire because he feared the base was under attack. Other guards said they held their fire because they couldn’t determine the source of the sound.

Al-Tuwaiha has said he had “no intention of killing anyone” and felt no resentment towards Americans. 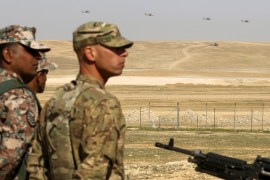 Three US troops killed in shooting at Jordan airbase

Three US service members came under fire at gate of al-Jafr airbase. One Jordanian officer was also wounded. 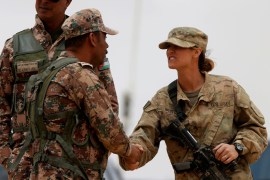 Some 7,400 troops from 20 nations taking part in Eager Lion military drills, ‘the largest and most complex to date’.