The landmark Grand al-Nuri Mosque of Mosul and its leaning minaret have been blown up, with the Iraqi army blaming ISIL for its destruction and the armed group accusing a US-led coalition air raid.

In recent days Iraqi forces have pushed deeper into the last remaining areas held by the Islamic State of Iraq and the Levant (ISIL, also known as ISIS) group in the centre of Iraq’s second-largest city.

“Our forces were advancing toward their targets deep in the Old City and when they got to within 50 metres of the Nuri mosque, Daesh committed another historical crime by blowing up the Nuri mosque,” Staff Lieutenant General Abdulamir Yarallah, the overall commander of the Mosul offensive, said in a statement late Wednesday.

In a statement on its Amaq website, ISIL blamed US aircraft for destroying the mosque.

The US military denied the allegation. “We did not strike in that area,” coalition spokesman US Air Force Colonel John Dorrian told Reuters news agency by phone.

The Grand al-Nuri Mosque was where ISIL’s leader Abu Bakr al-Baghdadi made a rare appearance in June 2014 and gave a speech while standing at a pulpit to proclaim the creation of a “caliphate”.

“The responsibility of this devastation is laid firmly at the doorstep of ISIS,” said Martin in a statement.

“This is a crime against the people of Mosul and all of Iraq, and is an example of why this brutal organisation must be annihilated.”

Iraqis lovingly call the minaret Al-Hadba, or “the hunchback”. The mosque is named after Nuruddin al-Zanki, a noble who fought the early crusaders from a fiefdom that covered territory in modern-day Turkey, Syria and Iraq. The mosque was built in 1172-73, shortly before his death, and housed an Islamic school.

Iraq‘s Prime Minister Haider al-Abadi denounced the destruction, saying it was a “declaration of defeat” by ISIL.

Al Jazeera’s Bernard Smith, reporting from Erbil, said Iraqis were expressing their anger and outrage over the bombing on social media.

“This is one of Iraq’s most important, historical symbols. Enormous anger here,” Smith said.

Iraqi forces earlier on Wednesday said they had started a push towards the mosque. A US-led coalition is providing air and ground support to the Mosul offensive which began in October 2016.

The forces had encircled on Tuesday the armed group’s stronghold in the Old City, the last district under their control in Mosul.

Iraqi officials had privately expressed the hope that the mosque could be captured early next week in time for Eid al-Fitr, the festival marking the end of the Muslim fasting month of Ramadan.

The fall of Mosul would, in effect, mark the end of the Iraqi half of the “caliphate”, even though ISIL would continue to control territory west and south of the city, the largest they had control of in both Iraq and Syria.

Baghdadi has left the fighting in Mosul to local commanders and is believed to be hiding in the border area between Iraq and Syria, according to US and Iraqi military sources. 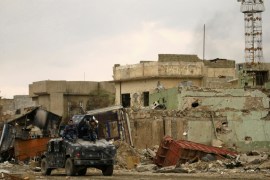 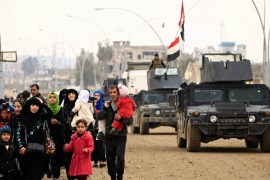 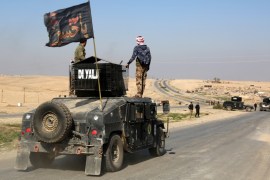