The United Nations believes up to 150,000 civilians are still trapped in harrowing conditions in Mosul’s Old City, where ISIL fighters battling advancing Iraqi forces are shooting at anyone trying to flee as part of a tactic to keep them as human shields.

The UN’s humanitarian chief Lise Grande said in an interview on Friday with The Associated Press that the global body expects the final battle for the Old City to start “within days”. She said conditions there “are desperate” and the UN expects almost all civilians to try to escape.

US-backed Iraqi forces have been battling fighters from the Islamic State of Iraq and the Levant (ISIL, also known as ISIS) in Mosul since October. ISIL now control only a handful of neighbourhoods in and around the Old City.

Grande said there have been more than 7,000 gunshot wounds of people trying to leave districts still controlled by ISIL.

Around 860,000 people have already fled Mosul, which was “beyond the worst case” scenario of 750,000 that the UN had planned for, said Grande.

The UN and Iraqi authorities have coordinated to build new camps and find spaces in existing camps for families returning to already recaptured eastern Mosul.

Grande said the Iraqi forces have tried to keep the daily flight of people below the saturation point of 20,000 when they attack a neighbourhood.

‘It’s going to get much worse’

Al Jazeera’s Bernard Smith, reporting from the city of Erbil, east of Mosul, said that trapped civilians were reportedly without food or running water in the Old City, and that – while Iraqi forces have dropped leaflets urging residents to flee before the final battle for control of the area – ISIL are shooting people that try to leave and are even welding doors shut.

Our correspondent said that the final battle in the dense streets of the Old City – believed to be held by around 1,000 ISIL fighters preparing to fight to the death – means that a large number of civilians will be trapped amid what the US-led coalition has described as possibly being some of the toughest urban fighting in recent decades.

“The Iraqi forces have done an awful lot to reduce the number of civilian casualties, air strikes are much more carefully considered before they are called in,” he said.

“The problem with having air strikes in this part of the Old City is because it is so built-up and dense, it is very difficult to avoid civilian casualties – that battle for the Old City is going to be perhaps the most challenging and difficult fight for all those fights for Mosul,” he said.

Amira Abd El Khalek, public information officer with the UN’s refugee agency, told Al Jazeera that the UN’s was “extremely concerned” about the remaining civilians in Mosul and that their top priority is to get them out safely as soon as possible.

“As long as there are safe passages that the Iraqi forces are able to establish, then civilians can move out. However, the civilians are trapped inside their homes, it is extremely difficult for them to get out because they are targeted by snipers,” she said from Erbil.

“So unless safe passages are available then it will be very difficult for civilians to get out. They are trapped inside with very little food and very little water. Some resort to drinking sewage water and there is no fuel left. So it is a very dire situation,” said El Khalek. 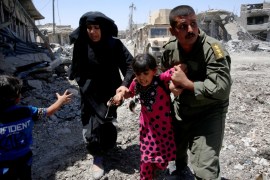 UN says it has received reports that 50-80 civilians died in Zinjili air raid, while more than 230 were killed by ISIL. 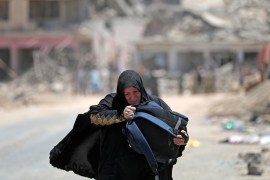 UN: ISIL kills 163 people in Mosul in one day 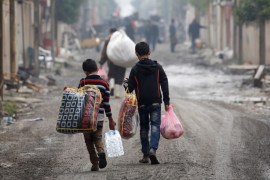