Early summer can be harsh in the Gulf States of the Middle East.

Temperatures are often at their peak. With the unrelenting sunshine, it can be a tough time of the year for those working outdoors in industries such as construction and energy production.

This is especially the case this summer, as Ramadan coincides with some of the highest predicted temperatures.

Now, an unusually strong regional wind, the shamal, is adding to the harshness of the weather.

Shamal means north in Arabic, and this wind blows from the north and gets funnelled down through the Gulf region.

It tends to develop as a trough of low pressure passes across the Levant and Iran. With high pressure sitting on top of the Arabian Peninsula, the result is a tight squeeze in the isobars. This strong pressure gradient results in strong winds.

Typically, the shamal blows for three to five days and can bring a variety of problems to the Gulf States.

The wind has quite a long fetch – the uninterrupted distance over which it travels – allowing huge seas to develop. Sustained winds of 45 to 65 km/h are generating waves of up to 3.7 metres.

This is likely to affect the loading of liquid petroleum gas on to ships in the region which generally takes place on artificial islands close to the coast.

On land, winds have been strong enough to cause minor damage, including the uprooting of palm trees.

It also brings an increase of dust in the atmosphere. On occasions, the dust can originate from around the Tigris and Euphrates river valleys and engulf much of the region in a haze of poor visibility.

Often, though, the biggest problem with dust is generated locally. A lot of building work is taking place in Saudi Arabia, Qatar and the UAE. Much of the dust is that blown from building sites where the surface layers have been disturbed.

Visibility is often far better in the desert areas than in the major cities.

Another concern with dust is the impact on health. Some Gulf cities such as Doha suffer from consistently high levels of air pollution. Increased amounts of dust inevitably exacerbate the situation.

The dust has another potential health effect. Cyanobacteria lie in shallow depressions in the ground, having formed when these depressions fill with water during the infrequent falls of rain.

They may be disturbed during building work and inhalation is believed to cause a motor neurone disease, amyotrophic lateral sclerosis.

Many workers cover their noses and mouths when working outdoors. This reduces the intake of dust suspended in the atmosphere and reduces the loss of moisture from the body.

Nevertheless, although working hours are restricted during Ramadan, the high temperatures (in excess of 45C), strong winds and low humidity make it very challenging to adhere to the need to abstain from taking fluids during the hours of Ramadan (just before dawn to dusk).

On the plus side, when the shamal eases, the change in air mass that it brings about can often clear the air and visibility and air quality can dramatically improve for a day or two.

This may not be the last strong shamal, though, as the period between June and mid-July is known locally as Al Bawarih, which means the strong wind that raises dust.

It is also known as the “40 days wind” and tends to peak during the second week of June. It is believed to be the result of the developing high pressure over the Arabian Peninsula and the northward push of the Indian monsoon trough of low pressure.

The current shamal is expected to strengthen even further during Thursday before slowly easing over the following few days. 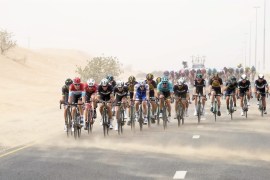 Wave of cold air brings snow to the Gulf

The latest wave of cold has brought snow to Oman and UAE and near record lows to Qatar.