Resurgent fighting between rival militia in the Central African Republic has displaced at least 88,000 people in the month of May alone, amid further deterioration of security conditions in the country, the UN Agency for Refugees (UNHCR) has said.

The agency said on Tuesday that 68,000 people were internally displaced while more than 20,000 were forced to flee into the neighbouring Democratic Republic of Congo.

“Significant rebel activity on towns along the Congo border as well as rumours of possible attacks are pushing people to flee in the Haute Kotto and Mbomou prefectures inside CAR,” Babar Baloch, spokesperson for UNHCR, said at a press briefing on Tuesday.

Over the last three weeks, fighting between Christian and Muslim militias has resulted in displacements within the three prefectures of Bria, Bangassou and Basse-Kotto.

In Bria alone, more than 41,000 people have been displaced. UN officials describe Bria as a “ghost town”, after a series of raids and attacks over the past week. Most of the displaced are currently sleeping in the open or makeshift shelters.

On Tuesday, the UN released an extensive mapping report covering the multiple incidents of violence in the country between 2003 and 2015.

The report documents some 620 incidents, including horrific accounts of entire villages being burned to the ground in reprisal attacks; multiple accounts of gang rapes of women and girls as young as five and extrajudicial killings, among other serious violations.

“The mapping report on the Central African Republic lays bare the staggering suffering of the people of this mineral-rich country which is among the poorest in the world,” Zeid Ra’ad Al Hussein, the UN High Commissioner for Human Rights, said.

The upsurge in violence in CAR has also pushed civilians across the border into the DR Congo’s Bas Uele and Ubangi provinces.

At least 20,575 Central Africans have fled over the past two weeks, according to the UNHCR.

On Sunday, Najat Rochdi, Humanitarian Coordinator in the Central African Republic, expressed “great concern at the resurgence of violence, atrocities and the violation of human rights with religious and ethnic connotations, committed in the past days.”

According to UNOCHA, six women and several children were brutally murdered by armed men because of their religious affiliation over the past week.

Rochdi also warned against international complacency in dealing the crisis.

“We must make sure that we do not fall back in those travails because we know the consequences and are concerned by some worrying warning signs.

Humanitarian access to many areas in CAR remains severely restricted as a result of the security situation.

Earlier in May, the medical charity, Doctors without Borders (known by the French acronym, MSF), said in a statement that the fighting was accompanied by “attacks on places of worship, businesses and local government buildings associated with one of the warring parties.

“These are stirring up ethnic and religious divides in Bria. Those actions are fuelling the cycle of reprisals and attacks against civilians that broke out in the east of the country months ago,” MSF said.

The CAR has been embroiled in a cycle of violence since March 2013, when Muslim-led Seleka rebels seized power, triggering reprisals by Christian “Anti-Balaka” militias.

The Seleka and other groups have since splintered, and this resulted in further violence. The election in March 2016 of President Faustin-Archange Touadera had raised hopes of reconciliation, but little has changed.

More than 40 percent of children are suffering from chronic malnutrition, one in seven will die before they turn five, and a third are out of school, according to figures from UNICEF.

The country’s humanitarian response plan for 2017 has only been 12 percent funded – $47m of a requested $400m – to date, as the UN’s Financial Tracking Service (FTS) shows.

There are 503,600 internally displaced persons in the CAR. Prior to the latest displacements, there were 102,600 Central African refugees registered in the Congo. 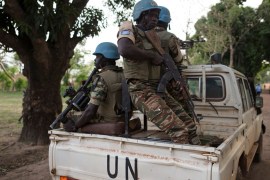