At least 27 people have been killed in an explosion inside a church in the Egyptian Nile Delta city of Tanta, state media reported, as another blast killed 16 in front of a church in the coastal city of Alexandria.

The Islamic State of Iraq and the Levant (ISIL, also known as ISIS) armed group on Sunday claimed responsibility for both attacks, in a statement via its Amaq website. It said they were carried out by two of its fighters wearing suicide vests.

Following the blasts, Egyptian President Abdel Fattah el-Sisi ordered troops be deployed across the country to help secure “vital facilities” and said a three-month state of emergency would be imposed.

Egypt’s state television reported that at least 71 people were wounded in the attack.

Several hours after the bombing in Tanta, another explosion hit in front of Saint Mark’s church in Alexandria, where Coptic Pope Tawadros II was leading a service.

Some on social media praised at least two police officers who they say stopped the bomber from entering the church. They were killed in the blast.

Witnesses in Tanta described a bloody and chaotic scene.

“Lots of bodies were torn apart and scattered on the floor,” said one man who was standing on the church’s altar when the bomb exploded.

Another witness said she saw flames flaring up to the church ceiling.

“There was thick smoke, I couldn’t see anyone,” she said. “We heard voices telling us to leave quickly. People were pushing so much that the gate bent.”

“It is alarming to see a specific religious group being targeted, which is going to rattle the Coptic community and many Egyptians in general,” Kaldas told Al Jazeera.

They also come just weeks before Pope Francis is due to visit Egypt. 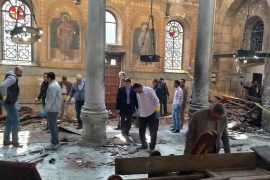 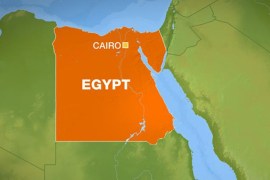