Some 1,500 Palestinian political prisoners held by Israel launched a mass hunger strike on Monday to press for basic rights and shed light on the difficult humanitarian conditions inside Israeli prisons, according to the Palestinian Prisoners Center for Studies.

The open-ended hunger strike, one of the largest in recent years, coincides with Palestinian Prisoners Day, annually commemorated on April 17. Led by jailed Fatah leader Marwan Barghouti, the strike will see Palestinian prisoners from across the political spectrum participate from within six prisons inside Israel.

“They have central demands and will continue to fast until they achieve them. The prisoners see hunger striking as the only door they can knock on to attain their rights,” Amina al-Taweel, the centre’s spokesperson, told Al Jazeera.

“Even though it is one of the most dangerous and difficult decisions, they are only making this choice because conditions [inside the prisons] have reached a new low,” said al-Taweel.

Rallies are expected to take place across major Palestinian cities in the occupied territories including Ramallah, Hebron and Nablus, in solidarity with the plight of prisoners.

“On this day, we are reminded of the pain of imprisonment, the cruelty of the occupation and the injustice of the prison cells, as we are reminded of our pride in your steadfastness and sacrifice,” he said in a recorded video message shared on his Twitter page.

“In the midst of this battle I call on all the Palestinian people and national institutions to show more solidarity so we can deliver the message of the prisoners to the whole world,” he continued. “Let us all push for the largest international, popular and official movement to stand by the prisoners in this critical time.”

Prisoners’ demands include installation of a public telephone in all prisons to allow communication with relatives, resuming bi-monthly family visits, allowing second-degree relatives to visit, increasing duration of the visits and allowing prisoners to take photographs with their families.

The Israeli government will be responsible for any and all of the consequences of this hunger strike - if a prisoner dies, or becomes extremely ill, they are the ones that will have to handle the outcome.

Many prisoners suffer from medical negligence in jails. Prisoners must pay for their own medical treatment, and are not provided with adequate healthcare. Sick prisoners have also reported being denied water.

Since 1967, more than 50 Palestinian prisoners have died owing to medical negligence inside Israeli jails, according to the Palestinian Central Bureau of Statistics. “Some people wait four years to get surgery,” said al-Taweel. “They’re calling for an end to this deliberate medical negligence.”

Additionally, prisoners are demanding better treatment when being transferred between prisons or between courts and prisons. Detainees are transported in a vehicle with blacked-out windows, known as the Bosta.

The vehicle is divided into tight metal cells, whereby the prisoner is chained from their arms and legs to a chair in a confined space, for long periods of time in the dark.

Other demands include installing air conditions in prisons, restoring kitchens, allowing detainees to keep books, newspapers and clothes, as well as ending the policies of administrative detention and solitary confinement.

“The Israeli government will be responsible for any and all of the consequences of this hunger strike – if a prisoner dies, or becomes extremely ill, they are the ones that will have to handle the outcome. Palestinian prisoners have been demanding these basic rights for years,” said al-Taweel.

READ MORE: Israeli prison ‘like being inside a grave’

Al-Taweel said there are high expectations that the Israeli Prison Service will carry out a campaign of prisoner transferrals, which she said would be an attempt to “try and break the will and determination of the prisoners”.

Al Jazeera reached out to the Israel Prison Service for comment but did not receive a response.

Families of Palestinian prisoners must apply for permits to visit them and are regularly denied entry into Israel on security pretexts.

“One of the most significant concerns is a violation of the Fourth Geneva Convention,” Omar Shakir, Israel and Palestine Director at Human Rights Watch), told Al Jazeera.

“Palestinian prisoners are placed inside Israel as opposed to the West Bank and Gaza strip. This is a crippling restriction on access to family and loved ones,” explained Shakir.

“Instead of unlawfully transferring prisoners outside the occupied territories, Israel must ensure all Palestinians arrested there are held in prisons and detention centres in the Occupied Palestinian Territories. Until then, the Israeli authorities must stop imposing excessive restrictions on visitation rights as a means of punishing prisoners and their families, and ensure that conditions fully meet international standards,” the report read, quoting Magdalena Mughrabi, deputy regional director at Amnesty International.

And, in 2014, 800 prisoners staged a strike against administrative detention for 63 days before a reaching a deal with the Israeli prison authorities and deciding to end their strike.

According to Shakir, a mass hunger strike is an attempt by Palestinian prisoners to shed light on such practices that raise serious questions about Israel’s policies under international law.

“It can help return the issue of Palestinian prisoners on top of the international community’s agenda. It’s about the plight of Palestinians behind bars,” said Shakir. 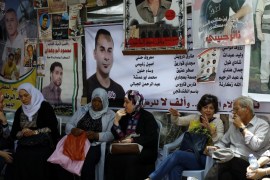 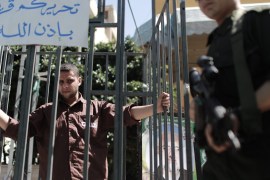