A crowdfunding project launched by Muslim activists has raised more than $55,000 in one day to repair a vandalised Jewish cemetery in St Louis.

On Tuesday, Linda Sarsour of the grassroots civil rights MPower Change group and Tarek El-Messidi of the non-profit CelebrateMercy organisation called on people to donate after more than 100 headstones at the Chesed Shel Emeth Cemetery in the St Louis suburb of University City were toppled.

By early Wednesday, at the time of publishing, $55,341 had been raised.

According to reports, police said they did not yet know who was responsible for the vandalism.

OPINION: In the US, we need a Muslim-Jewish alliance…

“Muslim Americans stand in solidarity with the Jewish American community to condemn this horrific act of desecration,” the activists said.

They launched the campaign with a goal to raise $20,000, a target that was hit in three hours.

“Any remaining funds – after the cemetery is restored – will be allocated to repair any other vandalised Jewish centres,” the pair said.

The cemetery vandalism came amid rising anti-Semitism in the United States, where Jewish centres have increasingly been targeted with bomb threats.

US President Donald Trump on Tuesday publicly condemned such attacks.

“The anti-Semitic threats targeting our Jewish community and community centres are horrible and are painful and a very sad reminder of the work that still must be done to root out hate and prejudice and evil,” Trump told reporters.

Both Muslim and Jewish communities have expressed fear over rising discrimination in recent months.

After a mosque in Texas burned down in January, Americans raised more than one million dollars for repairs.

The local Jewish community handed those affected the keys to their synagogue so they could continue to worship.

Sarsour and Messidi said that tolerance and mutual protection was a central theme in Islam.

“We hope to send a united message from the Jewish and Muslim communities that there is no place for this type of hate, desecration, and violence in America,” they said.

“We pray that this restores a sense of security and peace to the Jewish American community who has undoubtedly been shaken by this event.” 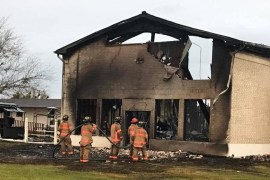 Though it is unclear how the mosque caught fire, an online fundraiser seeks to raise $850,000 to rebuild Islamic centre. 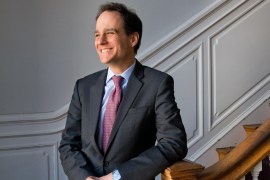 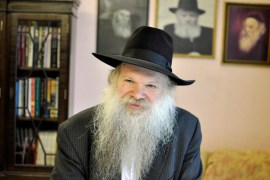 UK Jews and Muslims team up against hate

As religious tensions escalate in Europe, Muslims and Jews in North London band together to negate hate.