President Donald Trump has recognised Jerusalem as the capital of Israel and announced plans to relocate the US embassy, currently based in Tel Aviv, to the city.

Wednesday’s announcement, long-sought by Israel, breaks with decades of US policy as well as the international consensus. World leaders have urged Trump to reconsider, warning it could derail peace efforts and stir unrest in the region and beyond.

The status of Jerusalem – home to sites holy to Muslims, Jews and Christians – is one of the core issues in the perennial Israeli-Palestinian conflict.

After occupying the city’s eastern part in the 1967 War, Israel annexed the territory, and proclaimed it as its “eternal, undivided capital.” The Palestinians, however, see East Jerusalem as the capital of their future state.

Here is a look at some of the key questions surrounding Trump’s expected decision.

Why is Trump doing this?

Moving the US embassy from Tel Aviv to Jerusalem, and recognising the holy city as Israel’s capital, was a promise Trump made during his election campaign last year.

Wednesday’s announcement will thrill key financial donors like Las Vegas casino magnate Sheldon Adelson, who reportedly gave $25m to groups backing Trump ahead of the 2016 election. In April, the Politico news website reported that Adelson had expressed anger at Trump over his failure to fulfil the Jerusalem pledge.

The shift is likely to boost Trump’s popularity with his core, right-wing evangelical base.

The measure has broad support among American legislators too. The Jerusalem Embassy Act, passed by the US Congress in 1995, calls for the US embassy to be moved to Jerusalem.

In June, Trump also delayed the relocation while instructing his son-in-law Jared Kushner to launch an effort to restart long-stalled peace talks between the Palestinians and Israelis.

This week, the six-month deadline passed without Trump renewing the waiver.

Meanwhile, The New York Times on Sunday reported that the US and Saudi Arabia are backing a peace plan that gives Israel full control over Jerusalem.

Both the US and Saudi-Arabia denied the report.

When will the US embassy move take place?

The relocation of the embassy will not happen immediately and is expected to take several years.

In Britain, the US announced plans to relocate its embassy from north to south London in 2008. Nine years later, the embassy has not yet opened, something that is expected to happen in 2018.

The length of the relocation time has raised questions whether Trump’s decision could be reversed if he fails to win a second term in 2020. Al Jazeera’s Shihab Rattansi said officials in Washington, DC, claim the process of planning a new embassy, once it begins, would reach its conclusion.

The US already has a 99-year lease on a plot of land in Jerusalem; it was granted by Israel in 1989 at the cost of $1 per year but remains undeveloped.

No other country keeps an embassy in Jerusalem; most of those that did had relocated to Tel Aviv after the UN Security Council in 1980 condemned Israel’s annexation of East Jerusalem as a violation of international law. That came in response to Israel declaring Jerusalem as its capital.

What effect will Trump’s declaration have?

Jerusalem’s status is central to the Palestinian-Israeli peace talks, and the change in US policy carries deep symbolic meaning as it will be seen as backing Israeli sovereignty over the city, something the international community does not recognise.

Palestinian leaders have warned that any change to the status quo would mean the end of the peace process.

US officials, however, insist that Trump “remains committed to achieving a lasting peace agreement between the Israelis and Palestinians and is optimistic that peace can be achieved”.

One official said that Trump’s decision “doesn’t change the status quo with respect to the holy sites and other sensitive issues”.

Protests have meanwhile erupted in the Gaza Strip, while Palestinian leaders have called for three “days of rage” against the move.

Over the past 20 years, the Jerusalem issue has been at the heart of much of the violence between Palestinians and Israelis, including the 2000 Intifada, or uprising. Most recently, Israeli plans to install security cameras at the al-Aqsa Mosque, Islam’s third holiest site located in Jerusalem’s Old City, triggered weeks of unrest.

Leaders in the Middle East and elsewhere have warned of “disastrous consequences” should the US change its stance on Jerusalem.

Saudi King Salman told Trump in a phone call that the step could “inflame the passions of Muslims around the world”, while Iran’s Supreme Leader Ayatollah Ali Khamenei condemned the planned move as US “incompetence and failure”.

Turkey’s President Recep Tayyip Erdogan had earlier threatened to cut ties with Israel, while Federica Mogherini, the European Union’s top diplomat, said that “any action that would undermine” peace efforts to create two separate states for the Israelis and the Palestinians “must absolutely be avoided.”

Pope Francis said in his weekly address that the status quo that governs the al-Aqsa Mosque compound should be respected. Jordan has been the custodian of all Muslim and Christian sites in Jerusalem since 1994. 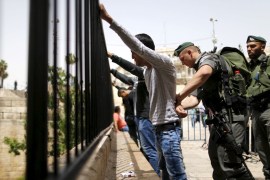 How Israel is Judaizing East Jerusalem

For decades, Israel has been establishing ‘facts on ground’ designed toward a greater Jewish majority in East Jerusalem. 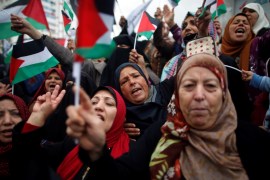 Palestinians call ‘days of rage’ over US Jerusalem move

Protesters in Gaza denounce US announcement declaring Jerusalem capital of Israel, as Palestinians call for a response.