Rohingya girls and women in Bangladesh’s Cox’s Bazar are being sold as sex slaves, according to a victim and aid agencies.

Fifteen-year-old Khartoun* told Al Jazeera she was sold into sex slavery after she arrived in Bangladesh by boat to escape a brutal military crackdown.

She was alone – her mother, father and sister had been killed by a mortar shell fired by the Myanmar military during a sweeping crackdown against Rohingya people. Upon Khartoun’s arrival in September, two women approached her on the beach and told her they would help her.

“They told me if I went with them they would look after me and help me find a husband,” Khartoun said.

Instead, she was locked up for three weeks and sold to a Bangladeshi man, who she said, raped her and sexually abused her for 12 days.

“He said ‘I will choke you, I will stab you. I will kill you … Do you want to be killed the way the military kill people in Myanmar? I won’t let you go,'” Khartoun told Al Jazeera.

The UN and aid agencies said labour and sex trafficking in refugee camps have gotten worse with the recent influx of more than 620,000 Rohingya.

The military unleashed a campaign of mass murder, rape and arson against the persecuted community after army bases came under attack from Rohingya fighters. The UN has said the army offensive amounted to ethnic cleansing.

Olivia Headon of the International Organisation for Migration said urgent action was required to keep women and girls safe in Bangladesh’s refugee camps.

“There’s been recruiters here in Cox’s Bazar, Bangladesh, previous to this influx and we know they are getting more business,” she told Al Jazeera. “And we know that new criminal networks have kicked into action.”

The organisation, which did not want to be named for fear of reprisal, said some girls as young as 13 have been abducted by the traffickers.

The man who bought Khartoun returned her to the women who sold her after 12 days. They left her at the Kutupalong refugee camp, where she now lives.

In 2015, Thai authorities uncovered extensive networks which trafficked Rohingya and held them for ransom in jungle camps after discovering 36 bodies in shallow graves along the Thai-Malaysian border.

An army general in Thailand and dozens of others were convicted over the case in July.

*Name changed to protect the victim. 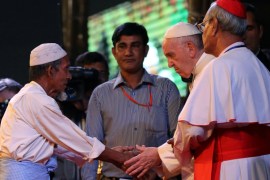 Francis meets Rohingya refugees in Dhaka after coming under fire for failing to mention them in a speech in Myanmar. 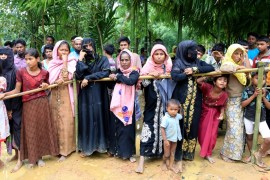 The Rohingya tragedy shows human solidarity is a lie

For way too long the international community has been ignoring the genocide of the Rohingya.