Boeing made its engineers sign a non-disclosure agreement that led some to refuse to discuss details of 787 “Dreamliner” designs with US government regulators, new documents reveal.

In 2011, the major plane and arms manufacturer made employees agree in writing that “non-public sensitive material” linked to a mysterious programme known as Project Espresso “must be safeguarded at all times and held confidential on a strict need-to-know basis”.

... don't implicate the 787 with your conversations. I say - don't talk redesign at all.

A Boeing manager to an engineer

After signing the agreement, Boeing engineers told Federal Aviation Administration (FAA) officials they were banned from speaking about specific features of the 787 passenger plane, triggering a government probe.

The engineers had signed a document that said: “I will only reveal and discuss Project Information with individuals as approved by Project Espresso sponsors.”

It added “all documents, files, working papers, charts, graphs and other materials both print and electronic” were restricted.

The programme was so secretive that even its waste materials were “disposed of by the appropriate Company-sanctioned method”, according to the nondisclosure agreement (NDA).

It is not clear what Project Espresso is, but it appears to focus on a redesign of the propulsion systems and engines of the Boeing 787 and 747 passenger jets.

Boeing told Al Jazeera that “coded projects involve proprietary or confidential information, which is not something we discuss with the media”.

“Are we allowed to talk to the FAA on the subject [of Project Espresso]?” an engineer in the engine installation and propulsion department asked his manager by email, having signed the agreement.

The reply came: “My understanding is that the NDA does not cover the 747-8 … but don’t implicate the 787 with your conversations. I say – don’t talk redesign at all.”

Another FAA report records how a different engineer, who had authority to regulate the 787, ended a call with FAA officials in order to clarify with his Boeing manager what he could discuss about Project Espresso with government officials. When he called back he “was choosing his words carefully”, and “said he was allowed under the agreement to only state to the FAA whether or not a design was compliant”.

That led the FAA to open an investigation led by its Boeing Aviation Manager, Angelos Xidias. He wrote to the Vice President of Engineering, Mike Delaney, in March 2011, saying his agency was looking into “possible undue pressure placed on Boeing Unit Members who are being directed not to communicate with the FAA”.

That same month, three senior FAA officials met with Boeing’s lead administrator on regulation. They included Xidias and Ali Bahrami, the man in charge of the 787’s certification. Boeing’s administrator told them he was unaware of the NDA.

However, Xidias wrote to Boeing in June 2011 recognising that “NDAs are reportedly signed … that restrict communication with the FAA”, but saying this “did not substantiate a violation of the regulations”. Xidias then issued a “Letter of No Action” and closed the case.

Documents released to Al Jazeera’s Investigative Unit under a freedom of information request show Boeing had been debating with the FAA for several months whether aerodynamic seals on the 787 wing and strut must comply with a fire safety regulation. This appears to have become the point of contention around Project Espresso and the NDA.

Boeing carried out its own investigation into the agreements and wrote to the regulator in May saying “the NDA did not prohibit contact or communication with the FAA”, and did not “limit discussion over issues on compliance to regulations”. It said the non-disclosure agreement was developed “to protect material information about cost and schedule … in order to comply with Securities and Exchange Commission regulations”.

Boeing acknowledged that a conversation had taken place between a Boeing engineer and an FAA specialist “where it was stated that questions surrounding redesign options and schedule flow would not be able to be discussed”. However, the company insisted that such questions “were not related to the compliance finding role” of the Boeing engineer, and so were not his responsibility to answer.

Boeing said it had published guidelines around the non-disclosure agreement that said engineers were allowed to talk to the FAA, but had not given them to those who had signed the agreement. The company acknowledged it should have done so.

The Boeing investigation also said no engineer had thought they were barred from talking to the FAA, and “each verified that they were not subject to any undue pressure”. 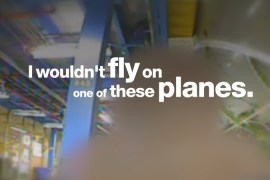