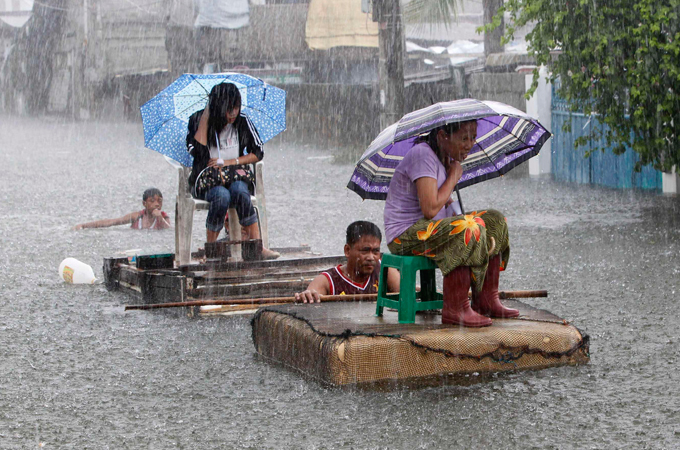 500,000 people in the Philippines were affected by Typhoon Saola, which caused widespread flooding in the capital Manila [Reuters]

The first week of August has been a fierce one in terms of tropical weather around the world. Two storms are now exiting, while 2 others are beginning to intensify.

What began on 22 July as a tropical disturbance in the western Pacific, developed into powerful Typhoon Saola, which brought widespread destruction to the Philippines, Taiwan and China.

The Philippines were hit the hardest in terms of casualties. Initial reports estimated the number of dead at around a dozen, but as of 3 August, those figures had increased to at least 39.

Even though the Philippines didn’t sustain a direct landfall, the heavy rains from the outer feeder bands caused widespread flooding. Over 500,000 people were affected by the storm and initial estimates place the damage costs at $5.5 million.

For Taiwan, the rain began days before Saola even made a landfall. The island started receiving hundreds of millimetres of rain each day as the storm approached. So much rain, in fact, that Typhoon Saola is now ranked the fifth wettest cyclone to ever hit Taiwan, with over 1700mm of rain in the course of the event.

No deaths have initially been reported due to this storm, but the remnants are moving into an area that has seen recent flooding.

The storm is expected to be named Haikui, and is forecast to become a powerful typhoon as it moves into the East China Sea by the middle of next week.

On the other side of the world, it has been well over a month since there has been any tropical action in the Atlantic. Now Tropical Storm Ernesto has developed and is making its way across the Lesser Antilles and into the warm waters of the Caribbean. It is currently bringing strong winds and heavy rain to the Windward Islands, but it is too early to tell the exact path the storm will take. Preliminary weather forecasts suggest that Ernesto could become a hurricane by late on Sunday.