By
Sorin Furcoi and
Azad Essa

At least 60 people were killed in Bria, as the FPRC rebels, a faction of the Seleka, a Muslim-led coalition that toppled then President Francois Bozize in a coup in 2013, targeted the mainly Christian anti-balaka fighters and anyone they considered to be associated with the group.

Thousands of people – both Muslim and Christian – have been killed in the country and almost a million displaced since the coup.

Christians and Muslims have been pitted against each other, although most analysts agree that the conflict is actually about taxation and who has control of the country’s mineral resources.

But the religious dimension to the armed groups and the violence they have wrought has nurtured animosity between the communities and made them increasingly isolated from one another.

In Bria, the IDP camps are mainly inhabited by Christians, while those residents who remain in the town are largely Muslim.

The two communities steer clear of each other, fearing reprisal attacks. The United Nations Office for the Coordination of Humanitarian Affairs (OCHA) says there are daily incidents between Christians and Muslims in the town – which remains tense, economically dysfunctional and in a state of limbo.

A month after the FPRC forces entered, some 41,000 people continue to live in squalid conditions in IDP camps around the town. In the PK3 camp, located 3km outside the town centre, around 26,000 people, mostly women and children, live in shelters made of pieces of wood sourced from the surrounding forests and plastic sheets provided by UN agencies.

Sporadic violence has broken out in several areas of central and eastern CAR over the past month. Hundreds have been killed. There are currently more than 500,000 IDPs across the country. 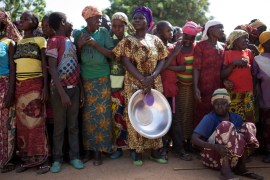 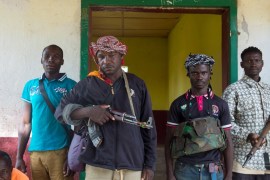 Almost 100,000 people displaced in Central African Republic in resurgent fighting since the beginning of May.

In Pictures: Hunt for survivors after deadly Indonesian cyclone