Istanbul, Turkey – In Turkic mythology, a grey wolf led ancient Turks out of the wilderness of the Central Asian Ergenekon valley, where they had been trapped for centuries following military defeat, and into salvation.

In the 1960s, the “Grey Wolves” became a nickname for the Ulku Ocaklari (Idealist Hearths), the Turkish ultranationalist youth and street movement largely affiliated with the Nationalist Movement Party (MHP) – the MHP is a parliamentary ally of President Recep Tayyip Erdogan’s governing Justice and Development Party (AK Party).

Attal cited the recent spraying of an Armenian “genocide” memorial near Lyon with slogans such as “grey wolf” and Erdogan’s initials.

While Ankara accepts many Armenians died in ethnic fighting and acknowledges deportations between 1915-1917 during World War I, it refuses the label of genocide.

Opposition politicians in Germany have also called for a ban on the Grey Wolves, which has been labelled as a far-right hardline group by the country’s domestic security agency.

This month, Dutch members of Parliament backed a motion asking the government to outlaw the Grey Wolves and to pressure the European Union into implementing a ban.

In 2019, Austria banned the wolf hand salute linked to the Grey Wolves.

However, in the case of France, the Turkish Foreign Ministry has said Paris was addressing an “imaginary formation” and the ban “reflects the latest contradictory psychology that this country lives in”.

In a November 4 statement, it said: “It is unacceptable to ban symbols that are used widely in many countries and bearing no illegal aspects.

“It is unfortunate that those who advocate that the freedom of expression cannot be restricted in any way when it comes to themselves easily restrict this freedom when it relates to others.”

The Ulku Ocaklari was founded by Alparslan Turkes – the figure behind the MHP, officially as a cultural and educational movement that was pan-Turkist, secular and Ataturkist – although tinged with a Muslim identity.

It became the paramilitary wing of Turkes’s MHP.

“The ideology of the Grey Wolves when they emerged, in the context of the Cold War, was strongly anti-communist – this was a time when Turkey’s right-wing nationalists feared Russia as Turkey’s greatest enemy,” Soner Cagaptay, director of the Turkish research programme at the Washington Institute for Near East Policy, told Al Jazeera

In the 1970s, thousands of people were reportedly killed in Turkey in fighting between armed right-wing and left-wing groups.

Turkish analysts, historians, and journalists say the Grey Wolves were among the most prominent right-wing groups linked to the killings of hundreds of people, including journalists, intellectuals, students, and trade unionists, Kurds, and Alevis, a religious minority.

Many of the group’s leading members were imprisoned following the 1980 military coup.

A leaked parliamentary report in 1998 detailed connections from the 70s to the 90s between Grey Wolves-linked figures – including Abdullah Catli, its former second in command – with organised crime, heroin smuggling, and political assassinations carried out in collaboration with the Turkish security forces.

In a 1997 report, Human Rights Watch wrote: “It appears that some security force members in Turkey who are sympathetic to or linked to right-wing nationalist groups do not pursue their duties dispassionately in a non-partisan manner, but are seemingly locked in struggle against a perceived mortal enemy, i.e. left-wing or Kurdish groups.”

The term “Grey Wolves” is now seldom used in Turkey – unless in reference to the 1970s death squads – with ulkucu/ulkuculer (idealist/idealists) more commonly used.

With the launch of the Kurdistan Workers Party’s (PKK) armed uprising in 1984, and later the demise of the Soviet Union, the movement’s main focus shifted to a virulent opposition to Kurdish nationalism. The PKK is designated a “terrorist” group by Turkey, the United States and the European Union.

In 1999, it achieved what remains its highest-ever electoral vote, at almost 18 percent.

“The MHP is not a normal party. Its vision is not to win elections,” Halil Karaveli, senior fellow with the Turkey Center of the Central Asia-Caucasus Institute and Silk Road Studies Program Joint Center, told Al Jazeera.

“Everything that Devlet Bahceli says and does reflects the motivations and aspirations of the Turkish state.”

The MHP did not respond to Al Jazeera’s request for comment.

Officially, the Ulku Ocaklari are not tied directly to politics – it is supposed to be a cultural and educational movement.

While the group admits a link to Turkes, it is vague on current connections with the MHP, although Bahceli features prominently on the ultranationalist entity’s website. The head of the Ulku Ocaklari, Ahmet Yigit Yildirim, has referred to Bahceli as “our dear leader”.

The MHP, for its part, does not mention Ulku Ocaklari on its official website, and says it rejects “extreme ideas”.

In terms of the French ban, the MHP has said it had nothing to do with the Grey Wolves in France.

MHP officials told the conservative Turkish Yeni Safak daily newspaper: “We do not have a structure called Ulku Ocaklari abroad.”

Bahceli was long a bitter opponent of Erdogan, including over his vehement opposition to the AK Party’s 2013-2015 peace process with the PKK.

But analysts say Erdogan has increasingly shifted his policies towards the MHP’s world view; using increasingly nationalist rhetoric, pursuing a more assertive and military interventionist foreign policy, and now taking a harder line on the PKK and groups perceived to be affiliated with aspirations for autonomy.

The two parties ran in an electoral alliance in 2018; the AK Party now depends on the MHP’s seats for a parliamentary majority.

The ulkuculer remain broadly associated with the MHP, although many also support the opposition Iyi Party – which split from the MHP in 2017 and opposes Erdogan.

“To stay in power, he had different allies in the past. And it just so happens that today he has nationalists as his allies.”

The Grey Wolves in France

The French banning decree labelled the “Grey Wolves” as a “de facto grouping” and said its meetings or activities could lead to fines or imprisonment.

The decree accused members of participating in a “youth weapons camp” organised in the Ardèche region of south-east France in December 2019 and of promoting “an ideology tending to discriminate or even provoke violence against people of Kurdish and Armenian origin”.

The French-Turkish Federation, a diaspora group affiliated with the MHP, said it was “surprised and upset” by the decree but urged its members to avoid disturbing “peace and order”.

Matthew Goldman, a researcher at the Swedish Research Institute in Istanbul, told Al Jazeera the ulkuculer are often amorphous in France.

Soner Cagaptay, director of the Turkish research programme at the Washington Institute for Near East Policy

Elements among Turkish nationalist supporters have engaged in street violence.

But Goldman said the current European perception of the ulkuculer is often outdated.

“I think [their violent past] colours the way politicians and members of the public respond to them,” he said.

Cagaptay thinks the ban is “more driven by French-Turkish rivalry perhaps than France seeing the Grey Wolves as a real domestic security threat”.

“Maybe the Grey Wolves are an instrument as seen by Paris to push back against Erdogan.”

France and Turkey are at odds over the war in Libya, a dispute over energy rights and maritime borders in the eastern Mediterranean, and over Turkey’s staunch backing to Azerbaijan in its conflict with Armenia in the Nagorno-Karabakh region.

In recent weeks Erdogan and French President Emmanuel Macron have also clashed after Macron’s remarks on Islam as a “religion in crisis”.

Erdogan has repeatedly questioned Macron’s mental health and called for a boycott of French products.

Goldman said the Grey Wolves are “triggering all the buttons” in France.

He said the ban should also be seen within wider inter-communal violence, including disturbances not involving Turks such as fights between Chechens and other groups in the Dijon region in June.

“So this kind of phenomenon has already been in the air, it’s been on the radar of the French authorities, and I think part of the effort to ban the [Grey Wolves] also goes back to that,” he said.

Goldman said it would not require direct orders or connections from Erdogan to rile up some in the Turkish diaspora.

“It’s very much influenced by the signals and triggers that Erdogan or others in Turkey send out – they can definitely help activate things.”

Karaveli believes that ulkuculer are now among the most important figures within the Turkish state bureaucracy, judiciary, and military.

“[The ulkucu movement] is a rising ideology in Turkey,” he said.

“What started as a top down movement to stamp out the left has now broadened – which I think is very much a reaction to the Kurdish issue, and is also maybe bolstered by Turkey’s foreign policy and its successes and the way it projects power, which are broadly popular.” 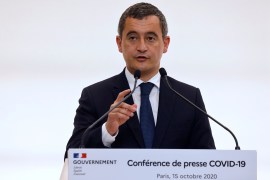