Interior Minister Gerald Darmanin described the organisation as “particularly aggressive” and told legislators on Monday that he would be seeking its dissolution at a cabinet meeting on Wednesday.

The ban follows recent incidents in France involving the Grey Wolves group amid growing tensions between France and Turkey and over the Nagorno-Karabakh conflict.

In one incident last weekend, France 3 television reported that the Armenian memorial near Lyon was tagged with pro-Turkish slogans and inscriptions with the Grey Wolves name.

The group was also linked to two anti-Armenian demonstrations by people carrying Turkish flags in the Lyon and Grenoble areas.

Cracking down on violence

The ban also came as France has been cracking down on violence following the murder of a French school teacher last month.

Samuel Paty was beheaded on October 16 by an 18-year-old of Chechen origin who was seeking to avenge his victim’s use of caricatures of the Prophet Muhammad in a class on freedom of expression.

Following Paty’s murder, France banned a group named after the late Sheikh Yassin, a Palestinian Muslim leader and co-founder of the Hamas movement. 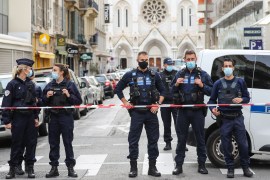 French police say they made two new arrests in the probe into an attack on a church that left three dead in Nice. 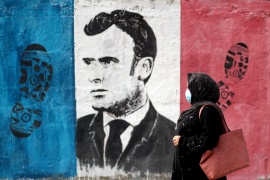 Is France at breaking point? 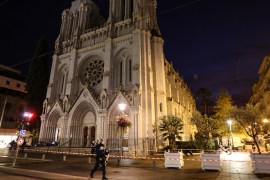 World leaders offer condolences to the people of France following the deadly knife attack at a church in the Nice.