Chai Buri District, Thailand – As he manoeuvred his pick-up truck along the dirt track leading to his village of Klong Sai Pattana one afternoon, Supot Kalasong, 42, heard a loud bang. He had been driving home after getting an oil-change in a nearby town and for a split second, he thought one of his tyres had exploded, burst by one of the sharp rocks on the path.

But when a man wielding a gun leapt from a ditch on the right side of the car, he realised someone was trying to kill him. “It wasn’t until the second bullet was fired that I realised it was gunfire,” Kalasong said a few months after the attack.

“I tried to get away to the left side and was shot in the leg twice. I then tried to grab the radio walkie-talkie to call for help from our security team, but he kept firing until the fifth bullet went into my arm,” recalls Kalasong of the incident that took place on April 8, 2016, in Surat Thani Province in southern Thailand.

Kalasong would have been killed had it not been for two villagers who, upon hearing the shots, ran down the hill towards the car less than 200 metres away. Spooked by their approach, the gunman fled into the dense undergrowth of a palm oil plantation. Kalasong was taken to a hospital in the provincial capital, returning to the village 12 days later to recover.

On that day, remarkably, he survived. Four other villagers from the Klong Sai Pattana community, however, were not quite as lucky.

Since 2008, this community of around 70 families have been embroiled in a conflict with a palm oil company that locals believe is behind the violence.

The company operated with no official legal documentation or land concession, until the Southern Peasant’s Federation of Thailand (SPFT) began investigating them and collecting evidence.

The SPFT was officially registered in 2008 but its founding members have long been fighting for land reforms in Surat Thani Province. The organisation works on behalf of landless farmers, identifying expropriated land owned by the state that can be made available for living and cultivation.

It reported its findings about the palm oil company to the Agricultural Land Reform Organisation (ALRO), a government agency in Surat Thani, which then took legal action against the company in 2005, suing them for illegal trespassing and land encroachment.

The ALRO won this case in the provincial court in 2007, but the palm oil company appealed the verdict continuously. In 2014, the ALRO resolutely won the case when a final decision was handed down by the Supreme Court in Bangkok.

But, even in 2008, after the successful resolution of the initial court case, hundreds of landless farmers under the supervision of the SPFT settled on a 26-hectare part of this land – building ramshackle houses from wood and growing small crops.

In May 2010, Prime Minister Abhisit Vejjajiva’s cabinet passed a regulation on the Issuance of Community Land Title Deeds and the community has been expecting to receive a land title deed since then.

This cabinet resolution set up a community land title deed programme which offers land use documents to entire communities as part of the government’s broad strategy to help reduce income disparity within the society. But the people of Klong Sai Pattana have yet to receive a deed.

The community has refused to succumb to intimidation and be forced off the land despite continuous opposition to their presence through ongoing violence from what they believe to be people hired by the palm oil company.

Prateep Rakangthong, 62, has lived in the village since its establishment in 2008. “I asked the villagers whether they want to stay and fight for our right to be here. Most said they had nowhere else to go,” explains Rakangthong, a respected figure in the village and committee member of SPFT.

“The first month I moved here, I could hear gunfire every night. They were firing bullets into our village at night-time,” he recalls, sitting in the pavilion in the centre of the village often used for meetings.

What began as intimidating warning tactics ultimately resulted in the fatal shooting of their first community member, Somporn Pattaphum, in 2010.

“In 2010, the influential group of investors tried to drive us out the area by using tractors to destroy our houses,” Rakangthong says, referring to the palm oil company. “One of our members was shot dead. Some villagers left while some wanted to stay and fight back.”

Other deaths followed. In 2012, Montha Chukaew, 54, and Pranee Boonrat, 50, were found shot dead. The two women were found a few minutes away from the entrance of the village, at the edge of a palm oil plantation surrounded by assault rifle bullet cases. In 2015, another villager, Chai Bungtonglek was found shot dead outside his family home.

The gunman, who was arrested but later released for the alleged murder of Bungtonglek, has since also been arrested for the attempted murder of Kalasong, but was acquitted by the Surat Thani Provincial Court for lack of evidence in February 2016.

“When we visited the community in 2010, we went there to represent the Rights and Liberties Protection Department (RLPD) because we’d received complaints about people being killed and property being damaged,” explains Nongporn Roongpetchwong, deputy director general of the Rights and Liberties Protection Department under the Ministry of Justice in Bangkok.

“I went there myself. It was very scary at that time. We saw the conditions that they lived in,” she explains in a meeting room inside the sprawling government compound in northern Bangkok.

To date, however, no one has been held accountable for the murders and acts of violence in Klong Sai Pattana, even though officials in Bangkok are aware of the community’s plight.

“In my personal opinion, in the case of human rights defenders in Klong Sai Pattana community, it’s still ambiguous because there’s a fight going on to take over the land that belongs to the government and those individuals do not have the right and neither does the company,” the deputy director general told Al Jazeera.

Pranom Somwong, the country representative of Protection International, a human rights organisation, explained that they work “very hard to put recognition on SPFT as a community-based human rights defender organisation. Because, first of all, people are scared about assisting them, in part because they have doubt about the occupation of the land and don’t understand the community land title issue,” she says from her cramped Bangkok office.

“At the beginning – diplomats, the media and others didn’t dare go to Klong Sai Pattana because of too many killings there. So we [Protection International] affirm their legitimacy at the national and international level, recognising SPFT as very rightful and inspirational land rights defenders and eventually a delegation from the European Union and Office of the High Commissioner for Human Rights of the United Nations visited the community,” she explains.

After numerous attempts, Al Jazeera was unable to reach the Jiew Kang Jue Pattana Co Ltd using publicly available contact information for comment on the numerous allegations brought by the organisations and villagers.

Working with the community

“The first day, they [Ministry of Justice] went down they had lots of questions and we felt they were still not understanding the issue. The Ministry of Justice asked how SPFT could still be peacefully defending their rights because there had been so many killings,” Somwong says.

Faced with such violence and having received no assistance from the government, the community has taken measures to protect themselves peacefully and collectively.

“Since villagers were killed, we started to protect ourselves rather than waiting for help from the government,” Kalasong says. “The security team has been arranged for everyone’s safety. There’s a rule that no one can leave the village after 6pm until 7am the next day. It’s not safe to leave the village when it’s dark. We all agreed on this since the deaths of Ms Montha and Ms Pranee.”

The village has four security posts constructed of sand bags and wood, located at its four outer corners. Every villager – man or woman – takes turns to man the posts in groups of three to four with rotating shifts every 12 hours in order to ensure the posts are manned 24 hours a day.

The only entrance for vehicles is closed at night to all traffic, with the exception of emergencies. Every vehicle that enters or leaves is meticulously logged in books, recording the licence plate, date, time and reason of entry. The more senior members of the community always carry walkie-talkies and video cameras attached to the dashboards of their pick-up trucks.

The community hold daily gatherings at 7am where they perform role call, discuss anything out of the ordinary and voice grievances. Everything is discussed and decided communally.

Things are slowly improving for Klong Sai Pattana and there are signs that the years of lobbying by the community, SPFT and other groups such as Protection International and the UN High Human Rights Commission (OHCHR), the Thai government is taking the threat against human rights defenders and communities more seriously.

In 2013, the UN Special Rapporteur on Human Rights defenders stepped in to raise the issue of Klong Sai Pattana with the Thai authorities.

The Ministry of Justice has been tasked with setting up so-called “working groups” that puts focus on those at greatest risk. For these groups, Klong Sai Pattana has been selected as the pilot case.

“The working group will focus on the protection of the community leaders, whereas the Rights and Liberties Protection Department will look at the human rights violations in accordance with our mission. From this, the working group will be able to set up an organised model where it can specify criteria of who human rights defenders are, how to protect them and if there should be regulations to support them,” Roongpetchwong says.

It remains to be seen whether the actions of these working groups can prevent further violence towards the community, but they are hoping that this path will ultimately lead to the universal recognition of their right to live and farm at Klong Sai Pattana, something for which they have fought for almost a decade. 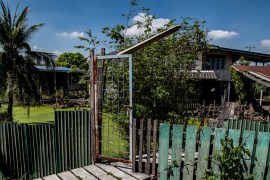 In the heart of Bangkok, a small community says it is escaping religious persecution by the Vietnamese authorities. 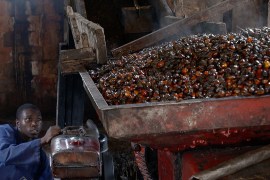