Pahoyan, Peru – In June, indigenous communities in the Central Peruvian Amazon marched in the sweltering jungle city of Pucallpa to condemn widespread deforestation in their communities and to commemorate Amazonian victims of environmental conflict. In the remote village of Pahoyan, Antonio Rojas Shuna got word of the protest quickly and in his native language, but not on TV or the internet.

Radio is the bridge between the city and indigenous communities.

“Our Shipibo brothers inform us of what’s going on with our territory and the environment,” said Rojas Shuna, 53, as he repaired the foundation of his flood-damaged home.

In the age of instant access to digital information, radio is redefining its purpose in isolated villages in the Peruvian Amazon, where Spanish is a second language and signs of climate change are everywhere.

In Pucallpa and other cities in this region, a growing number of indigenous activists are reclaiming radio to reach communities reeling from environmental issues and to revive their endangered languages.

“The indigenous press send messages and speak to us through their programmes and we listen. We feel indigenous,” said Limber Maynas Mahya, Chief of Pahoyan, an ethnic Shipibo-Konibo village located 15 hours by boat from Pucallpa along the Ucayali River.

The community medical centre was inundated and waterborne illnesses spread. Without help from the regional government, Shipibo language radio programmes in Pucallpa allowed the community to broadcast their struggle and appeal to the outside world for help.

“Radio is the bridge between the city and indigenous communities,” said Moises Cardenas Sanchez, host of the environmental programme Prensa Libre Intercultural, one of nearly a dozen Shipibo-language radio programmes in Pucallpa.

Out of a run down local station in Pucallpa, these Shipibo radio activists are reaching hundreds of thousands in the city and in some of the most remote communities in this part of the Amazon through in-studio broadcasting, testimonies from the field, and the recent integration of live media and podcasting for urban audiences.

They are scruffy motorcycle taxi drivers and young mothers, teachers and indigenous youth leaders. Most are urban migrants from isolated communities such as Pahoyan.

Environmental NGO Global Witness labels Peru as the fourth deadliest country on the planet to be an environmental activist, with at least 57 murdered since 2002. In 2014, four Ashaninka indigenous environmental leaders were murdered in the Ucayali department for defending their land against illegal logging – a practice which can yield twice the profit of its legal counterpart.

Despite the risks of speaking out against these practices, Sanchez and his peers take on politically charged topics such as narco-trafficking, illegal mining, and the expansion of palm oil plantations.

“We put ourselves at risk talking about climate change and the transnational logging companies coming into our communities. But if we don’t defend our communities, who will?” Sanchez asks.

His Shipibo community, called Caimito, which has lost thousands of hectares of ancestral land in recent years owing to state appropriation, is listening, he said.

“I’m conscious of the fact that nobody pays me to be on the radio, but I was born in a community I knew I would one day have to serve,” the radio host said.

Ruth Ventura is co-host of an environmental justice programme called Radio Informativo FECONAU (Federation of Native Communities of the Ucayali and Affluents), which broadcasts in Shipinol – a mixture of Shipibo and Spanish.

Her programme drives her to be a voice for young indigenous women, she said.

“I give my perspective, I give my opinion. When I speak I’m the voice for them as well, and that’s an important role,” said the 28-year-old mother and teacher.

‘We’ve had to fight to earn our place in radio’

Inclusion was not always the norm. Shipibo radio pioneer Glorioso Castro Martinez had to break through a wall of discrimination in the early 1980s when he got his start. Indigenous language programmes, he said, just were not given any airtime.

We have a great power to make our cultural identity, our territories, our traditional knowledge, our medicinal plants known.

“We’ve had to fight to earn our place in radio. Now, the young people are coming up with their new programmes and it’s allowed us to keep going. I’m not alone,” he said.

His programme, Voz de la Selva, focuses on the environment but devotes time to Shipibo music, art, and culture as well.

“We have a great power to make our cultural identity, our territories, our traditional knowledge, our medicinal plants known,” said Martinez, 54.

The timing might be right for Martinez and his peers in indigenous communication to cast a wider net. The revival and affirmation of Peru’s indigenous cultures and languages have reached a national consciousness in recent years, with Quechua language TV and radio now airing in the capital, Lima.

Wilder Rodriguez Gonzalez, an indigenous language communication specialist in the Ministry of Education, sees the Shipibo radio movement in Pucallpa as scrappy and full of potential, but noted that it lacks cohesion.

“They need to take it a step further. With proper training and more organisation, they can start reaching a national audience,” he said.

For now, they are hitting their target by reaching most of the roughly 30,000 Shipibo speakers left in the world, with the aim of orienting and driving them to action in their communities.

Back in Pahoyan, Alberto Franchini Silvano sat on his porch, turning the FM dial of his portable radio. The static cleared and a voice in Shipibo discussed illegal logging.

“Our Shipibo ancestors never had these problems,” said the 50-year-old elementary school teacher, with a hint of hopelessness in his voice.

He has recently begun teaching his students about their obligation to protect their forests.

“When I hear these programmes in my language it makes me want to stand up and do something about it,” he said. 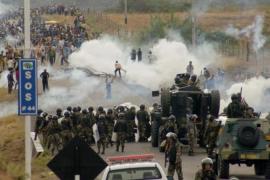