For the past two years, activists in Memphis, Tennessee, have campaigned to have a pair of Confederate statues removed from the city centre.

One of the statues is of the Civil War-era president of the Confederate States, Jefferson Davis, and the other of Nathan Bedford Forrest, one of the earliest prominent members of the Ku Klux Klan (KKK), the white supremacist vigilante group that killed African-Americans and burned their homes.

Tennessee, however, has had a law barring the removal of these statues since 2013. Last week, the city held a hearing about seeking a waiver to the law that would allow for the monuments to be removed.

The debate in Memphis is part of a nationwide discussion over the country’s brutal history of enslavement and the legacy of the Civil War.

While pro-Confederate groups argue that eradicating the monuments effectively erases history, others say they serve as constant reminders of institutional racism, segregation and slavery.

Social justice activist Tami Sawyer, who founded Memphians for the Removal of Confederate Monuments, says the argument that the monuments need to be preserved on historical grounds is “misguided”.

“Kids see these statues and think they’re for great people,” she tells Al Jazeera, explaining that more than 60 percent of the city’s population is African-American. “These statues don’t say anything about the atrocities.”

Although the struggle to grapple with US history has been a long one, the debate grew in intensity after white supremacist Dylann Roof entered the Emanuel African Methodist Episcopal Church in Charleston, South Carolina, and killed nine people in June 2015 in the hope of sparking a race war.

Less than two weeks later, 30-year-old educator and activist Bree Newsome climbed the flagpole in front of the South Carolina statehouse and pulled down the Confederate flag that flew in front of the building. The images were broadcast nationwide.

Since Roof’s rampage, the Southern Poverty Law Center watchdog has documented that at least 60 public-funded Confederate monuments have been removed or renamed.

In recent months, however, hardline groups such as the alt-right, which gained notoriety for its vocal support for US President Donald Trump, have led the charge against removing Confederate statues.

On August 12, far-right groups from across the US will travel to Charlottesville, Virginia, to protest in front of a statue of Confederate General Robert E Lee, the south’s foremost military leader during the Civil War.

The demonstration has been dubbed “Unite the Right”, and the neo-Confederate League of the South, one of the groups participating, has proclaimed its eagerness to confront anti-fascists and activists from the Black Lives Matter civil rights movement.

Among those who will demonstrate in support of keeping the monument and others like it standing are white nationalists, white supremacists and neo-Nazis, including prominent members of the alt-right movement such as the National Policy Institute’s Richard Spencer and the Traditionalist Workers Party’s Matthew Heimbach.

On a flyer for the event available on the Traditionalist Workers Party’s website, the white supremacist group tells white Americans that the removal of Confederate monuments is “an attack on your racial existence” and urges them to “fight back or die”.

“There’s always been an overlap between the alt-right and the neo-Confederate movement, meaning people who not only revere the memory of the Confederacy but want to revive it in some sort of political sense today,” Matthew Lyons, researcher and author of Ctrl Alt Delete, tells Al Jazeera.

The struggle over the country’s memory of the Confederacy and slavery has seen these historical sites become a venue for confrontations between the far right and anti-fascists, colloquially called Antifa.

In mid-May, alt-rightists and other pro-Confederate protesters, wielding flaming torches, converged on Charlottesville and held a rally at the same park they plan to revisit in August.

Vanguard America, a white supremacist group that sent members to the rally, later described the incident as “not simply over some metal sculpture atop a pedestal in a small southern city”.

The statement accused “the Jews” of carrying out a “War of Attrition” against “the white man by tearing down our monuments”.

The pro-Confederate contingent was subsequently praised by the neo-Nazi Daily Stormer blog and other far-right websites.

They were met by angry passers by and counter protesters, among them anti-fascists, who came out in opposition. The next day, an impromptu protest against the far-right activists was staged in the same park, drawing a much larger crowd of several hundred people at short notice.

“You don’t have to plan to fight Nazis. All you have to do is have the sense of mind to say this cannot stand. People were walking by and said wait a minute, there is a problem here,” says Daryl Lamonte Jenkins of the anti-racist organisation One People’s Project.

“They are trying to preserve the monuments because that’s all they got,” he adds. “But just like the Confederacy, it’s a lost cause.”

The initial rally was called in response to the removal of four Confederate statues in New Orleans, Louisiana. In early May, fights between the far right and Antifa activists broke out at Lee Park in front of another statue of Robert E Lee.

Although Lieutenant Governor Billy Nungesser had appealed to President Trump for help in preserving Confederate monuments earlier in the month, four such statues were eventually removed.

‘Rub salt in the wounds’

Pro-monument politicians and groups have campaigned in favour of preserving the memorials, arguing that removing them from public space erases history.

In late May, Alabama Governor Kay Ivey signed into law the Memorial Preservation Act, which provides sweeping protections for Confederate and other historic monuments.

“Contrary to what its detractors say, the Memorial Preservation Act is intended to preserve all of Alabama’s history – the good and the bad – so our children and grandchildren can learn from the past to create a better future,” Gerald Allen, the Republican state senator who sponsored the bill, said in a statement.

Writing on Facebook earlier that month, Karl Oliver, a Republican state politician in Mississippi, called for the lynching of those who advocate removing the monuments, likening them to Nazis. He was later forced to apologise for the remarks.

Karl Oliver, a State Rep from Mississippi, says people who take down Confederate monuments should be lynched. https://t.co/bFp6IxRvcw pic.twitter.com/up9BHFIUuE

In a statement on the removal of New Orleans’ statues, the League of the South framed the debate as an effort to demoralise southerners, claiming that the city authorities chose to remove “cherished monuments simply to rub salt into the wounds of the Southern people”.

In February, the League of the South announced the establishment of a vigilante group to “defend” southerners from “the leftist menace to our historic Christian civilisation”.

The League of the South failed to reply to Al Jazeera’s requests for a comment.

Back in Tennessee, activist Tami Sawyer says her vocal opposition to the monuments has gained widespread support as well as some online harassment, including a slew of racist social media messages.

“Black people in America are never going to forget slavery,” she says. “We still live under the cloud of the racial segregation caused by slavery. We don’t need statues that call these people heroic to remember where we came from.” 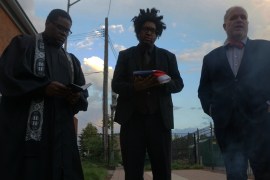 Detroit residents against divisive symbol put fire to Confederate flag to raise awareness of the need to fight racism. 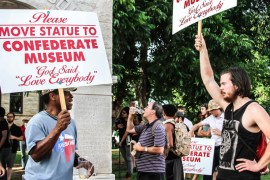