Over the past two months, Venezuela has seen near daily demonstrations – with anti- and pro-government protesters taking to the streets. More than 50 people have been killed.

The political roots of the protests extend back to January 2016, when the Supreme Court suspended the election of four legislators for alleged voting irregularities. The opposition accused the court of trying to strip them of their super-majority, and went ahead and swore in three of the legislators. The Supreme Court responded by ruling that the entire opposition-led National Assembly was in contempt and that any decisions it made would not stand.

Protests broke out the next day – and were violenty repressed – and although the court reversed its decision, the demonstrations have continued.

They come against the backdrop of a crippling economic crisis that has resulted in a drastic shortage of food and medicine.

President Nicolas Maduro has accused the United States of attempting to destabilise his government and has pressed ahead with a plan to create a popular assembly with the ability to rewrite the constitution. He says the grassroots body is needed to bring peace to Venezuela, but opponents view it as a tactic to buy time and avoid a general election.

It is a crisis that has divided Venezuelans. Here, we speak to two who explain why they support the government:

Alberto Mathison, 38, musician and mechanical engineer
‘We are in the middle of a class war’

“I actively participated [in the demonstrations] because I believe in having peace in our country. We need to resolve our differences by constitutional means, by having respect, communion, solidarity, and sovereignty.

I consider that these [anti-government] protests are illegitimate; there was a problem over some legislators, therefore the Supreme Court had the right to overrule the National Assembly, and today the opposition is not willing to negotiate. We need a legitimate assembly, either with the opposition or those who are on the side of the government.

President Maduro has faced this crisis with great capacity, and with agility, confronting the current economic war. He has maintained the institutionality, the legacy of Chavez, the machinery that works in favour of our people.

What we are living through is a programmed act of apparent scarcity. The transnational corporations and the people who manage the industry and distribution channels are responsible for this crisis.

We are in the middle of a class war. This is a fight where we, the people who are not part of the oligarchy, are blamed for the fact that hospitals have reached poor neighbourhoods, that bus journeys are among the cheapest in the world, that poor people have access to food.

We are getting closer to a much more harmonious relationship, and the Venezuelan oligarchy cannot accept the transformation.

To me, the most terrible damage that the oligarchy has done is to impose a culture of hatred. The dialogue between the parties could have been so much easier, but today we have people who have assumed that violence is the only way to satisfy this difference.

However, I believe that beyond all of what’s on our screens, and all the game of truths and lies, we are a people of peace. And although this conflict and situation has affected me and our people, this fight has given us more clarity in terms of the historical movement we are facing. We need to fight. To me, all of this is blackmail by those on the right, and we have to go through this in order to be able to transform our reality.”

Kruspcaya Padilla, 33, university professor
‘I grew up in a country full of fear, poverty and inequality’

“I’m not an active militant, and I don’t belong to a specific political party, but I see the world from a humanist, leftist perspective. I believe in the people’s right to take decisions.

Today, I can tell you that I live in a Venezuela of tension. There are a number of people who have bet on violence, a situation I will never agree to, but I also understand that they are not a majority.

In addition to the political crisis, we are going through very difficult economic circumstances.

We learned that a different economic model was feasible, that there was no stigma in being poor, that we could live with dignity

President Maduro has continued a process that the late President Chavez started, but with the value of a barrel of oil at $40 rather than almost $100 [Venezuela’s economy depends heavily on oil revenue]. Even so, people have not experienced massive layoffs, budget cuts, we didn’t see hospitals or schools shutting down. There is austerity, but President Maduro has continued the socialist project, albeit with much less oil revenue.

This oil boom also hurt us. People who were miserably poor enjoyed this time of boom. But in those circles, there was also corruption. It was easy to access the money, but when the prices dropped, the people who didn’t belong to the left or to the right kept fighting for their comfortable life.

On the other hand, we are also going through a process of economic blockade. Let’s remember that there was a brutal attempted coup against the late President Chavez. There were a lot of people who resented the oil money going to the popular economy, to hospitals, to culture.

These people resented the change. They blocked the oil industry and the money just reached a few families, and today, in conjunction with the transnationals, this war continues in the sector of food and medicines.

Many members of the right have also been dishonest with the country. As a majority in the National Assembly, people voted for them, and while legislating they have done everything except try to find solutions to our current proplems.

They are focused on ratifying illegally some deputies, generating a legislative process that is in contempt, and they have not pronounced a single law to favour the people. This is very consistent with the Venezuela we used to have, the Venezuela ruled from the right.

The left has made their mistakes but has been honest. Chavismo built hospitals and housing. The socialist state responded [to the needs of the people].

We learned that a different economic model was feasible, that there was no stigma in being poor, that we could live with dignity.

Venezuela before Chavez was a devastated country

And despite the circumstances, I am not at war, I am in a complex political process, a long process. I try to put my best effort in, I am a citizen who is part of the complexity of my country. I try to understand right and left.

And in the future, if the majority vote again for the right, in legal elections, in due time, I would definitely respect the results, but I would be afraid.

I would be very afraid. I would fear revenge. I would fear going back to a process where people who think differently to the right were ignored. We know that the right exterminates the opponent, I would be afraid of that.

Venezuela before Chavez was a devastated country, a country that constantly went through strong economic impasses. The class divisions were devastating. Many people did not have access to healthcare and education.

It was a hard time. People looted food places because there were no alternatives. At that time, President Carlos Andres called in the national guard, which came to shoot. This was the Caracazo [a wave of protests, looting and massacres that took place in 1989]. I grew up in a country full of fear, poverty and inequality.

At the time, all people came together and voted for Hugo Chavez. What we were living through was brutal, it was a situation of social violence, poverty. In response to this absence of containment by the state, we all decided to vote for the left.

Today we are going through a different moment, but what we all want is peace and tranquility and for the international community to respect our right to take our own decisions. We hope in due course to have peaceful elections, with results we will democratically accept as we have done for 17 years now.

This is my country, and I would love for the baby I’m waiting for to live in a country of fairness, a country full of opportunities, a country where free education and healthcare is a right, not a privilege. I want for my baby to grow up in a different world to the one that the capitalism has offered.” 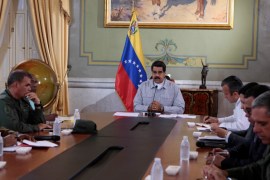 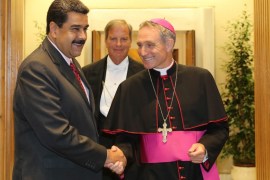