Geneva, Switzerland – The leader of the most powerful Kurdish group in Syria, which currently controls about 15 percent of the country, is sitting with two of his aides in a modest apartment in a quiet neighbourhood not far from the UN headquarters in Geneva.

Salih Muslim, who left his family in the restive Syrian city of Kobane, is waiting to receive an invitation to the peace talks being held here between the Syrian government and the Syrian opposition.

But this seems unlikely to happen any time soon. UN Syria envoy Staffan de Mistura has already sent out the invitations and the talks have begun. Muslim and his PYD party have been excluded, despite the fact that the Kurds were the most successful fighting force on the ground in 2015.

The armed wing of the party, the YPG, has managed to regain much of Syria’s traditionally Kurdish territory from the Islamic State of Iraq and the Levant (ISIL), and according to the IHS think-tank, expanded the territory under its control by 186 percent within a year to occupy 15,800 square kilometres of Syria.

“There is something we really want: the peace process to be started in Syria,” the softly-spoken leader told Al Jazeera.

“It’s impossible for it to be done if we are not part of it. We are sincere and we are genuine and we would like to be part of it.”

RELATED: Inside Story – Is there any hope for the Syria talks?

Like his impeccably ironed white shirt, Muslim’s calm demeanour gives little clue to the fact that this is a man who has come from a battlefield or that, in 2013, his youngest son was killed fighting ISIL in the Kurdish-dominated Tal Abyad. Neither does it hint to his more than two decades of activism for Kurdish rights.

The small, simply furnished apartment in which he is staying also says little about his influence as a political leader.

“We haven’t been invited. The Swiss government made some arrangement for us and other groups to be here, and we made it as a preparation for the peace process. We will get ready, but we have not had any invitation for now,” Muslim explained.

Some prominent voices have been against his attendance.

The main opposition delegation, which was formed in Riyadh last month and includes a broad spectrum of opposition groups, accused the PYD of cooperating with the government of President Bashar al-Assad during the war. And Turkey, a key regional player, says the party is linked to the Kurdistan Workers’ Party (PKK), which has waged a 32-year insurgency against the Turkish state that has seen more than 40,000 killed and is listed as a terrorist group by the European Union and the United States.

Muslim denies both claims, saying they are lies fabricated by Ankara.

“We are part of the Syrian revolution,” the 65-year-old insists.

“The relation with Assad is just an accusation. Everybody knows that we have been struggling against the regime since 2004, seven years before the start of the Syrian revolution. We have had many martyrs killed by the regime,” he continued. In 2004, a bloody crackdown by government troops on Kurdish demonstrations left an estimated 30 people dead.

Muslim says that since 2003, he has frequently been imprisoned by Assad’s government.

But the fact that the YPG has rarely engaged in clashes with government forces since the mass uprising erupted in 2011 has raised questions about its alliances.

Government troops simply withdrew from Kurdish areas during the conflict, and the YPG stepped in to replace them, leaving the Kurdish group to govern those areas and protect them from ISIL when it attempted to expand.

“Why doesn’t the YPG launch at least one attack against regime troops?” Maksim Alissa, a Syrian- Kurdish journalist, asked Al Jazeera, adding that Muslim is anti-Assad in words but not action.

Alissa suggests that after the deterioration of relations between Syria and Turkey following the start of the uprising, Assad’s government decided to reach out to Muslim and his party to annoy Ankara.

But Muslim says the Kurdish area is currently surrounded by “extremists”, and it is them the YPG is focusing its fight on.

“We are not only fighting ISIL but the mentality of ISIL, like Jabhat al-Nusra and Ahrar al-Sham. They have the same mentality. And we are also against the regime if they attack us,” he told Al Jazeera.

A representative of Ahrar al-Sham, one of the most effective fighting groups across Syria, is part of the opposition delegation included in the Geneva talks.

When asked what he thought of that, Muslim said: “If they are coming for the peace process then it’s OK. It means they believe in a democratic solution and a political solution.

“The first step in this process is ceasefire. So if they accept [a] ceasefire and are ready for a political solution, then any group which is genuine to accept this is no problem for us.” 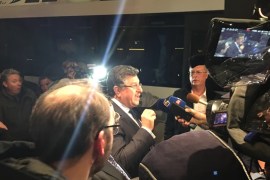 Main opposition group arrives in Switzerland but wants humanitarian issues addressed before it will talk politics.