Ali was only 12 years old and living in East Jerusalem when the 1967 war began. She remembers washing dishes in the courtyard of her home when the bombs started to fall.

“The soldiers came door to door and told us that we should leave. They told us they would pay for our bus fare to Jordan,” she told Al Jazeera.

Ali’s family – including her mother and some of her five siblings – fled to al-Karameh, a border town in Jordan. But safety was not to be found there either after it became a flashpoint in the “war of attrition”.

Ali vividly remembers her mother throwing her into an empty barrel and covering it with her own body to protect her during a bombing.

Ali is now 66, a mother of three and a grandmother of six with her own midwifery practice in California. But the pain of forced displacement she suffered in childhood is still raw – so raw that she has been reliving the fear and helplessness as she watched Palestinians in recent weeks face forced expulsion from their Jerusalem homes and Israel’s relentless 11-day bombardment of Gaza that killed 248 people.

“She has been crying every night,” her daughter, Noora Ali, told Al Jazeera. “The trauma still affects her to this day. She still remembers the bombs exploding around her.”

But Ali is not bereft of hope. That is because this latest brutal round of violence has also sown the seeds of a possible sea change in US public opinion towards Israel’s occupation of Palestine – one that could eventually set conditions on the $3.8bn of aid the US gives to Israel annually.

On May 15, Ali and her daughters marched down Wilshire Boulevard in Los Angeles surrounded by a sea of Palestinian flags and signs calling for an end to US military aid to Israel.

They have been attending such events for years, the family said, but never had they seen so much support from outside of the Palestinian community.

“I was so moved. I had blisters on my feet, but I walked and walked. I barely noticed them at all,” Ali said.

Advocacy groups that organised the march in Los Angeles, one of many that took place across the country, estimated that more than 20,000 people attended.

Pro-Israel groups are a powerful force in the US, donating millions of dollars to US federal political candidates each year. During the 2020 campaign, pro-Israel groups donated $30.95m, 63 percent going to Democrats and 36 percent to Republicans, according to non-profit OpenSecrets.org.

But while the leadership of the Democratic Party is still reflexively pro-Israel, attitudes among the party’s voters have been undergoing a shift.

A 2021 Gallup poll found that while two-thirds of Democratic voters still held favourable views of Israel, two-thirds also favoured Palestinian statehood. Support among Democratic voters for the US putting more pressure on the Israelis to make peace stood at 53 percent.

Now, Palestinian rights groups and their allies in the progressive movement are seeking to translate that shifting public opinion into real legislative change in the US, starting with putting conditions on the billions of dollars in aid the US sends to Israel every year.

“We understand that we’re still very much facing an uphill battle politically before we see an end to American support for Israeli apartheid,” Lubna Hammad, an organiser with the advocacy group Yalla Indivisible, which helped organise the march, told Al Jazeera.

“But the conversation happening now, the increased scrutiny of the American relationship with Israel, would have been impossible just a few years ago,” she added.

US President Joe Biden has continued to express his support for Israel throughout the current conflict and has proposed selling $735m of US weapons to its military.

“Biden is not just failing to exert pressure to bring the fighting to an end, he is giving the [President Benjamin] Netanyahu government a clear green light,” Khaled Elgindy, the director of the programme on Palestine at the Middle East Institute, told Al Jazeera.

But while US military aid to Israel was seen as politically untouchable for years, Palestinian advocacy groups and progressive US legislators are increasingly vocal in their challenges to that consensus.

On Wednesday, Representatives Rashida Tlaib of Michigan, Alexandria Ocasio-Cortez of New York, and Mark Pocan of Wisconsin stated that they would introduce a resolution to block the $735m arms sale to Israel.

While unlikely to pass, it represents a growing willingness by progressives to exert pressure on the Democratic Party establishment.

“To have members of Congress calling for the end of US military aid and demanding a ceasefire, it shows we have a voice and it’s being amplified,” Omar Ghraieb, a Palestinian writer living in Gaza, told Al Jazeera via email.

Social media has also made witness accounts of the violence and displacement available to everyday people, a factor that organisers say is playing a key role in changing the narrative of the conflict.

“The world can no longer act like they aren’t seeing what’s happening in Palestine; they will eventually be pressured to hold Israel accountable,” Ghraieb said.

There have been other developments as well. Representative Betty McCollum of Minnesota also introduced legislation calling for greater scrutiny towards US military assistance, seeking to ensure that it is not being used for activities such as the detention of Palestinian children, home demolitions, or the theft of Palestinian land in the occupied territories.

For a while, it felt possible for people to be progressive except for when it came to Palestinian rights. I think that’s over now. Palestine is part of a larger movement for racial justice and freedom.

The bill currently has 22 cosponsors and is supported by more than 100 civil and human rights groups, according to Amanda Yanchury, McCollum’s communications director.

“Change will not be made overnight or through one bill – it will come when Americans no longer are willing to tolerate our tax dollars being used to support the systematic persecution of the Palestinian people,” Yanchury told Al Jazeera via email.

Advocates are not expecting the legislation to pass anytime soon. But they are encouraged that it is helping spur a growing debate in the party about the relationship between the US and Israel.

“We’ve seen a lot of people talk this week about the need to protect Palestinian human rights,” Beth Miller, who works on political advocacy for the progressive group Jewish Voice for Peace, told Al Jazeera. “Anyone who cares about Palestinian rights should be tripping over themselves to support this bill.”

For Palestinians living under Israeli rule, the question of conditioning military aid is not an abstract one.

“The impact of this military aid on the ground for Palestinians is clear,” Mariam Barghouti, a Palestinian writer and researcher who lives in the occupied West Bank, told Al Jazeera. “It means repression of Palestinians by the Israeli military and border police. It means ethnic cleansing. It means the bombing of Gaza.”

The world can no longer act like they aren’t seeing what's happening in Palestine; they will eventually be pressured to hold Israel accountable.

While Palestinians say they face an uphill political battle in changing the entrenched status quo between Israel and the US, they are feeling a shift nonetheless.

“For a while, it felt possible for people to be progressive except for when it came to Palestinian rights,” Ahmad Abuznaid, the executive director of the US Campaign for Palestinian Rights, told Al Jazeera. “I think that’s over now. Palestine is part of a larger movement for racial justice and freedom.”

As the disconnect between the Democratic Party’s base and its leadership becomes starker, Abuznaid said he is hopeful that meaningful change is possible.

“Yes, the [Biden] administration has been disappointing,” he said. “But mass movements are what ultimately bring change, and we’re seeing a change on the ground like we’ve never seen before.” 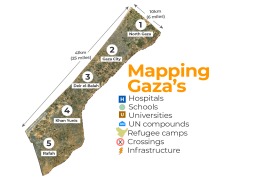 Al Jazeera takes you on a tour of key locations across the densely populated Gaza Strip. 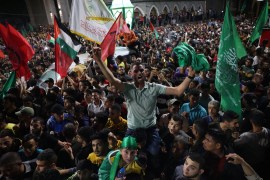 In Pictures: Celebrations across Gaza after 11 days of bombing

Thousands of Palestinians take to the streets after ceasefire between Israel and Hamas takes effect. 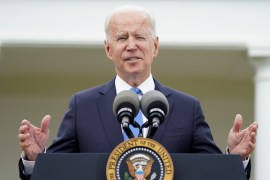 Israeli attacks on Gaza spurred protests in the US, but experts say Joe Biden hopes to return issue to the back burner. 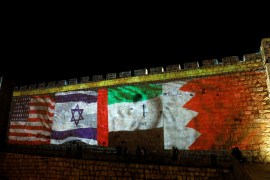