Kashef, Al Jazeera’s AI predictor, was more than a little stunned by Croatia’s upset of Brazil in their quarter-final match as the Brazilians were predicted to have a whopping 70 percent chance of winning.

But Kashef bounced back to accurately foretell Argentina’s electric win over the Netherlands on Friday.

The Argentina-Netherlands bout was a much tougher call to make for our robot, with Kashef giving Argentina only a 52 percent chance of seizing victory.

Kahsef is putting his robot money down for a French win on Saturday over England.

But it is a narrowly backed selection. At 52 percent, Kashef is marginally leaning towards Les Bleus who will rely heavily on Kylian Mbappe, who has scored four times in five games for the French.

The game against England is a much tighter prediction for France, compared with their  3-1 win over Poland, an outcome Kashef predicted by a likelihood of 74 percent.

Kashef has compiled more than 200 metrics, including the number of wins, goals scored, FIFA rankings and more, from matches played over the past century to make his predictions.

England have beaten France 17 times in 33 matches. But 10 of those victories by England came before 1950.

England and France have clashed at two previous World Cups, with the Three Lions clinching it in 1966, when the team won its first and only World Cup, and in 1982.

He correctly predicted seven of the eight games in the last 16 matches after momentarily faltering in an upset-filled group stage.

After every match, Kashef reruns the model to predict the outcome of the next game all the way through to the final.

Predicting match results is no easy task: external factors such as team morale or player fitness make a big difference to how the game goes. 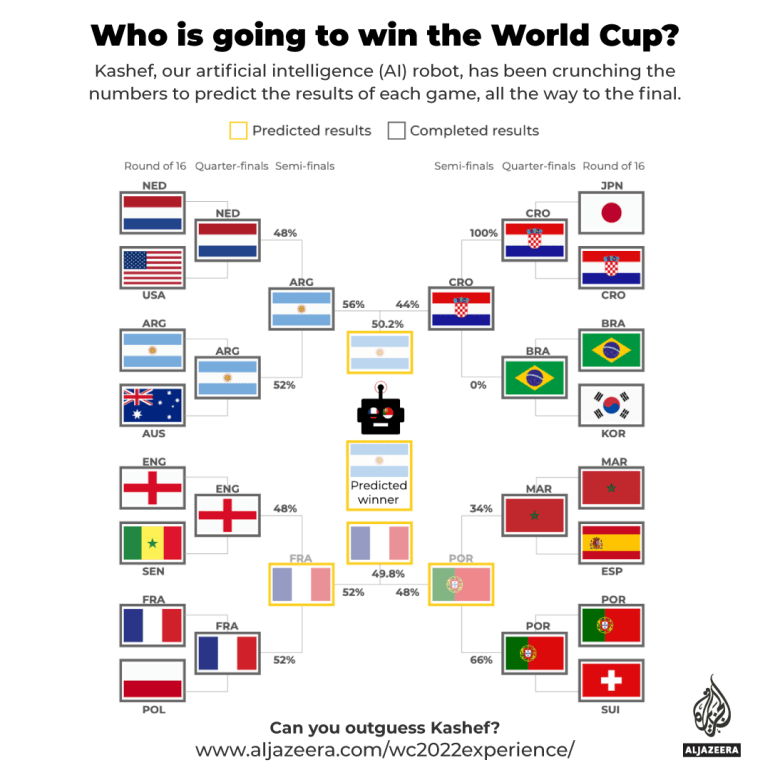