The striker’s personal yacht, jet, bank accounts, and properties in six Brazilian cities were blocked over charges that he, his family and related businesses owe about $16m in taxes allegedly evaded from 2011 to 2013.

Authorities ordered that assets valued at three times the alleged evaded amount be frozen, in accordance with Brazilian law in cases of deliberate evasion.

A Sao Paulo federal court rejected an appeal from Neymar, who denies any wrongdoing, last week over the allegations and started issuing warrants to freeze his assets.

Iagaro Jung Martins, an auditor with Brazil’s federal tax agency, told the Associated Press news agency that Neymar is not likely to go to jail if he pays what regulators say he owes.

“He can still appeal that decision, but it is a step forward,” Martins said. “Nothing changed to what was in place last year: if he pays what he owes, the case is closed. Our legislation isn’t too harsh.”

The asset seizure is the latest controversy surrounding the 23-year-old player for the Spanish football club Barcelona.

On February 2, Neymar and his father were questioned for three hours in a court in Madrid about the player’s transfer from the Brazilian club Santos to Barcelona. The case was brought by Grupo Sonda, which invested in Neymar early in his career and was allegedly entitled to 40 percent of the total transfer amount.

Barcelona maintains that the deal cost the club $74m. Santos officially received a payment of $18.5m, with the remaining $55.5m going to a company owned by his father.

Former and current presidents of the Barcelona club and representatives of Santos were also questioned over the case.

In May last year Santos filed a lawsuit with FIFA, seeking compensation for a breach of contract.

All parties deny any wrongdoing. 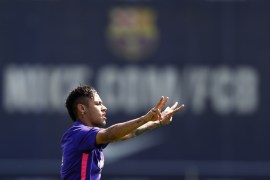 Santos seeking compensation for breach of contract when Neymar was signed by the Spanish club. 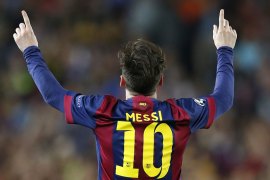 Footballer cleared of wrongdoing but prosecutors seek 18-month prison sentence for his father.