Jorge Lorenzo has won the Czech Grand Prix for his fifth triumph of the season, tightening the MotoGP championship fight with his Yamaha teammate Valentino Rossi.

The Spaniard, with the Movistar Yamaha team, covered 22 laps of the 5.403km Brno circuit in 42 minutes, 53.042 seconds for his 38th overall MotoGP victory.

Lorenzo and Rossi sit joint top of the standings with 211 points and seven races to go.

Defending champion Marc Marquez is 52 points behind the duo.

“Luckily, I had a little bit more pace than Marc and I could win this very important victory… because now I’m leading the championship with Valentino,” said Lorenzo, the 2010 and 2012 MotoGP champion.

Starting third on the grid, Rossi dropped to fifth after the start before quickly rallying to third. Andrea Iannone on a Ducati was fourth followed by Dani Pedrosa, the Honda Repsol teammate of Marquez.

It was the 11th podium in as many races this season for Rossi, the former nine-time champion in all categories.

“Unfortunately, my start was bad and I lost some time in the first laps,” Rossi said. “I tried to push but I was not fast and strong enough.”

The next race is the British Grand Prix on August 30. 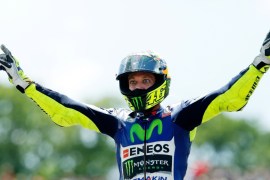 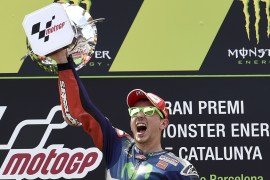 Spaniard led for record 102 consecutive laps in Spain to go within a point behind leader Rossi.