The most concentrated population in the sprawling city of Buenos Aires, Argentina, is found in its slums.

As with so many of the marginalised shanty towns of Latin America, there is a wellspring of violence and economic despair. Caught in the ever-shifting instability of Argentina’s economy, there is little chance that these slums will be transformed or that their residents will be able to easily escape the country’s cyclical poverty.

Despite this for Eugenio, a 32-year-old photographer who still calls the slum of Villa 15 his home, there is a persistent richness to the life around him, and hope.

He teaches his profession to children and young children from these poor neighbourhoods. He is committed to following up on the work of his former teacher, Martin, who inspired him. So he works with children who live in this hostile environment, scarred by violence, delinquency and abuse, to inspire them to express themselves with photography. He seeks to infuse them with the same passion that he feels for creativity, art and learning.

Through different photographic activities he encourages his students, especially Carlitos, a close neighbour, to develop their own abilities and creativity. He seeks to prepare them for a life, despite their circumstances, that includes a sense of individual identity, artistic appreciation and an aspiration to see their own world differently. As he works with the children through the classes it will all lead up to a special presentation of their work in an exhibition in the city.

This film was first broadcast on Al Jazeera English in June 2015. 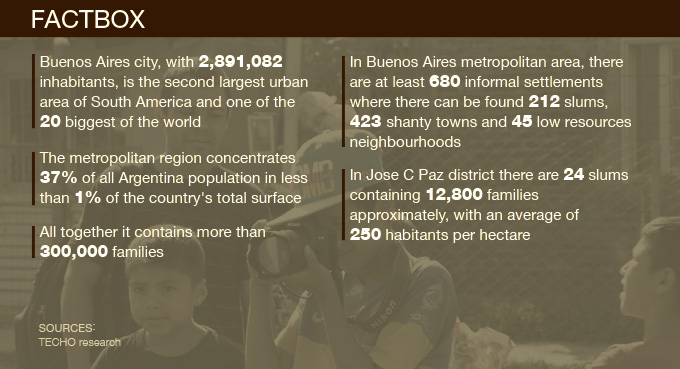 At first, many of the residents think of this housing situation as a transition stage, though more often than not it becomes a permanent way of life.

Rife social inequality and lack of employment opportunities creates divisions in such crowded communities, where disadvantaged people are stopped from reaching their full potential.

Fortunately there are people who are trying to change this cycle of poverty and give their own time and knowledge to help people to succeed.

One such person is Eugenio.

I first met Eugenio when I was teaching cinematography workshops in the “hidden city”, the name given to a prominent slum in the city. Eugenio was teaching photography to a group of children from this community.

I have always admired Eugenio’s approach to teaching and, after getting to know him, I understood why. He used to be one of those marginalised children himself, living in a slum, dealing with the same sensation of exclusion and lack of possibility. Within this workshops he found a sense of inclusion and opportunity, as well as his dream career.

Eugenio decided to start this project in order to bring workshops to slums and shanty towns, where opportunities are few and far between.

I felt that it was important to tell Eugenio’s story.

The most important aspect of his project is the fact that he not only gives children the opportunity to study photography but also gives them the tools to express themselves, a “voice”.

Eugenio uses his own experience of growing up in a slum and replicates the chances he got as a child, hoping that one of his students will want to do the same in the future.

After several years of looking for a chance to tell this story, I met my producer, Maite, who helped to make it finally happen. It took us a long time to gain the confidence of the children. The neighbourhood was not easy, either. While we encountered some cooperation, we also found a lot of resistance.

The responsibility of working with young children forced us to be cautious and avoid dangerous situations. Despite the sensitivities, our primary objective was to show how the children used Eugenio’s workshops as a way to express themselves.

It is important for us to tell these kinds of stories and visualise these actions in order to let people see how social change can be achieved.