Sao Paulo is a swelling, burgeoning metropolis that is likely the largest city in the Americas. It is also the centerpiece of Brazil’s capitalistic juggernaut.

This dynamism has created great shifts in the stability of those on the edge of economic security. One of the consequences has been pockets and neighbourhoods falling victim to surges of crime and in the case of ‘Cracolandia’, illegal drug use. Julio Docjar is a graffiti artist dedicated to rejuvenating his neighbourhood and helping his neighbours.

Starting with a mobile art workshop and then setting up a series of small residential shelters, Julio is dedicated to helping the vulnerable around him find stability and through art and find a voice to demand social equity that will bring change and make their lives better. 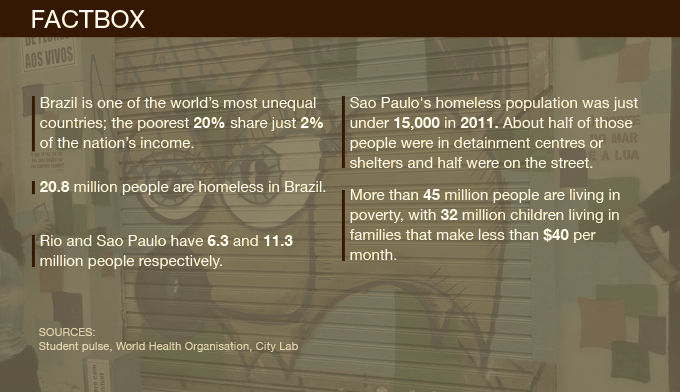 Sao Paulo is a very big, very populous city, full of professional and cultural opportunities. However it has social inequality to the extreme. It is more and more common for the upper class to lock themselves away in gated luxury condos, while the poor are neglected by society and abandoned by the government.

It is a reality that needs to combine ideologies and actions as varied as possible in order to bring dignity to these families. And that is why we found the work of the street artist, Julio Dojcsar, so special and inspiring.

Julio was born and raised on the east end of Sao Paulo, one of the many neglected neighbourhoods of the city. The area is difficult to access and homes are basic, at best.

From an early age, Julio learned to battle for social justice from his father, a strong community leader. As a young man, he experimented with ways to express himself through art.

Since then, he has brought street art and cultural activities together, aiming to strengthen, educate and integrate people from several needy communities. He says he has never been a gallery artist because his art is much more political than aesthetic – it is made to cause nuisance, to take people away from inertia. If that were not the case, he says, his art would be meaningless.

In the film, we tried to show how street art can be a powerful tool for social transformation and how simple actions can mean so much to people and places. We followed the artist on a project called “Moving House”, which takes place in the central area of the city known as “Cracoland”.

The neighbourhood is a place where crack addicts take drugs out in the open, where most families have broken down and where children are left to wander alone on the streets, amongst garbage-lined sidewalks. This is a place where it is hard to get along.

Julio’s strong moral sensibilities attract many people to his way of thinking. But he insists that his work is built collectively, made up of artists who contribute to specific actions or people in the community who take on project demands.

For Julio, local involvement is very important as it results in a stronger community and sense of pride within the community.

Making this film was a great learning experience for us; it was the proof that it does not take much money, or too much structure, to develop cultural and educational activities that make a difference to many people’s lives.