By the end of 2014, only 9,800 US troops will remain in Afghanistan, which is causing widespread concerns about the country’s stability.

For two years, Zekria has been desperately trying to find a way out of his home city, Kabul. He has been working for an international agency and is afraid of what will happen to him after the foreign troops depart.

He discovers an opportunity to leave and is determined to keep his plans secret from his family. Telling them it is a short assignment in another part of the country, he packs all his belongings and boards a plane to New York City – uncertain if he will ever be able to return.

Watch our first film about Zekria here: Stranded in Kabul 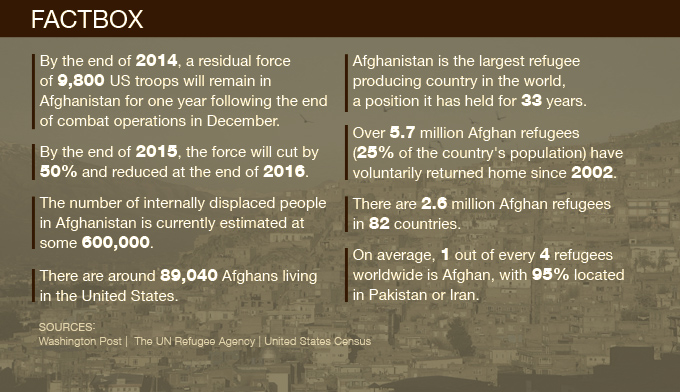 By the end of December 2014, all foreign combat troops will have withdrawn from Afghanistan. The bilateral security agreement, signed on September 30, will allow around 9,800 US troops to remain to advise and train Afghan security forces.

While it may mark the end of the war for US and other foreign combat forces, the war is far from over for the 30 or so million Afghans who will remain.

The United Nations reported that civilian causalities are on the rise following the drawdown of foreign troops. The number of civilians killed or injured in war increased 24 percent this year as compared to the same period a last year.

Many Afghans who worked with foreign troops and international agencies have been threatened and fear what will happen to them after foreign troops leave. This means that some of the most educated and qualified Afghans are leaving the country, unable, 13 years after the US led invasion, to feel safe.

Last year, we made a film for Al Jazeera about our close friend, Zekria, who worked for an international organisation and was trying to find a way to flee Afghanistan.

His only hope was a visa on the black market. When his work presented him with the opportunity to visit the US, Zekria and his colleague and best friend, Zabi, decided that if they went to the US they could not return to Afghanistan.

Both of them feared for their personal safety if they remained in Afghanistan, and they saw this as their only chance to escape.

As security deteriorates, the number of asylum seekers from Afghanistan has been steadily rising, and as of 2014 Afghanistan is one of the top three refugee-producing countries.

Most Afghan asylum seekers head to Europe, but for those who go to the US, it can take months or sometimes years to be given an answer about their case.

When Zekria received his visa, we knew it would be important to follow his journey as he bid farewell to Kabul, his family, and all he knew and headed off in search of peace, security and freedom in the US. We wanted to explore, too, what his perceptions of the US were before he went and how they might change once he arrived.

For many new immigrants and asylum seekers, it is not always an easy adjustment in a foreign country, away from all loved ones. We knew the hardest part for Zekria would be leaving his parents, but we also understood that it was not a decision he made lightly, instead he felt he had no other way.