Between May and August 1992, more than 3,200 Bosnian Muslims, known as Bosniaks, and Croats were killed in and around the town of Prijedor and at the Omarska concentration camp.

“Prijedor was a truly lively town. People had always lived together. They relied on each other. The mosque faced the church. People were together at weddings, at funerals, as godparents. They married irrespective of faith. It was Yugoslavia in the truest sense of the name,” says Rezac Hukanovic, a journalist and publisher who is an Omarska camp survivor.

By 1992, the Yugoslav Federation was disintegrating. Slovenia and Croatia had already broken away, sparking a conflict with Serbia. Further violence broke out in Bosnia-Herzegovina, which had also declared independence.

The Serbs there wanted to remain within Yugoslavia and build a greater Serbia – and received backing from extremists in Belgrade. Bosniaks were driven from their homes in what soon became known as ‘ethnic cleansing’.

The first outbreaks were in northern Bosnia-Herzegovina in and around the municipality of Prijedor, where Bosnian Serb military and police unlawfully segregated, arrested and confined several thousand Bosniaks and Bosnian Croats.

“On April 30, 1992, the Serb forces and the Serb Democratic Party carried out what I would call a coup. They removed, by force, all the elected authorities, Bosniaks and Croats from all official positions and took their places … They took full control of the town, the police, the court, the bank and the municipality … They took the radio, the media outlet that would disseminate everything the local Serb authorities had to say,” recalls Nusreta Sivac, a former judge in Prijedor and an Omarska camp survivor.

On May 31, 1992, the Bosnian Serb authorities in Prijedor ordered the non-Serb population to mark their homes with white flags and wear white armbands. Thousands of Bosniaks and Croats were imprisoned at Omarska.

While Serb forces set up hundreds of concentration camps throughout Bosnia-Herzegovina, Omarska was the most notorious and where relatively few survived.

Survivors such as Rezak Hukanovic and Serif Velic saw fathers and sons in the camp being killed in front of each another and witnessed fellow inmates being heavily beaten by Serb prison guards.

Sivac describes how women and girls were taken away to be raped: “It’s hard to defend yourself against a man who’s physically strong and armed.”

When a woman came back after being called up by one of the abusers, “none of us spoke at all … Fear is a strange emotion. When it overwhelms you, you start being afraid of yourself,” says Sivac. “You don’t even dare to ask your fellow inmate who suffers with you where she’s been and what has happened.”

“I am surrounded with guys whose eyes are burning to talk. And I can tell you there is nothing like the eyes of someone who wants to tell you about what is going on in a place like Omarska and cannot. They speak for themselves”, says Vulliamy.

Penny Marshall was on the same visit to Omarska and also exposed what had happened there and said the prisoners appeared terrified: “I have only once in my life, and I doubt I’ll ever see it again, seen men who are scared to death”.

Omarska only remained open for a few months but witnessed some of the worst atrocities of the war. It now opens once a year on the anniversary of the camp’s closure on August 6,1992, a permanent memorial to those who died both there and in Prijedor.

Using archive of the International Criminal Tribunal for the former Yugoslavia at the Hague from 2000, this film examines whether the international judicial system managed to achieve justice for the victims of Prijedor and Omarska.

With many un-arrested alleged war criminals still living in and around the small town of Prijedor, it’s not uncommon for camp survivors to come face to face with those who once abused them.

“The very establishment of the tribunal in The Hague was just a naive story for the gullible that justice would finally be done. Now we all know it hasn’t,” says Hukanovic. “I used to see the same people in the streets of Prijedor who wore uniforms in Omarska.”

In the tribunal process “a sentence for genocide was less than for other serious violations of international humanitarian law,” says Sivac. “There is a denial and negation of what happened. Even ordinary people here deny it, let alone the government structures. There’s no condemnation at all.”

Sivac and Hukanovic have run into their former abusers: “I’ve met guards, investigators and interrogators. None of them have been held accountable. I just raise my head proudly and look them in the eyes.” 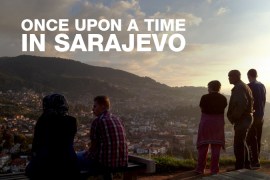 Once Upon a Time in Sarajevo

Can three comedians from Bosnia overcome the bitterness of the past to reunite and reconcile? 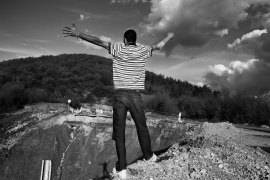 Adis Smajic lives with the legacy of the Bosnian war after losing an eye and part of his arm in a landmine explosion.