On August 1, 1966, after the collapse of last-ditch attempts by Nigeria’s power brokers to prevent the impending civil war, Lieutenant Colonel Odumegwu Ojukwu said only one thing would make the rebels cease fire: “that the Republic of Nigeria be split into its component parts; and all southerners in the North be repatriated to the South and that Northerners resident in the South be repatriated to the North”.

On May 30, 1967, Oxford-educated Ojukwu declared Biafra an independent state in the southeast of the country. On July 6, 1967, civil war broke out in Nigeria, which claimed more than a million lives in just three years.

Fast-forward to June 2017. Irked by renewed secessionist calls from the same Igbo ethnic group, a coalition of northern groups issued a notice, demanding “all Igbo currently residing in any part of Northern Nigeria to relocate within three months and all northerners residing in the East are advised likewise”.

Although made 51 years apart, those two statements are strikingly similar. Since the first was followed by a war, there is real reason to worry that the second could prompt another.

Last week’s commemoration of the 50th anniversary of Nigeria’s civil war should have been an opportunity for Nigerians to remember the ills of war and to vow not to let it happen again. Instead, the voices of secession raged even louder.

Secessionist movement an indictment of past leadership

The resurrection of the clamour for secession five decades since the civil war is simply the result of serial leadership failure in Nigerian politics. When the war ended in 1970, Yakubu Gowon, then head of state, promised to “build a nation, great in justice, fair trade, and industry”. But he and his successors didn’t.

Although there is no evidence of efforts to specifically ignore the plight of the Igbo, generations of corrupt and selfish leaders have entered and vacated office with no real plan to rebuild the East from the ruins of war, neither have they done anything for the insurgency-ravaged North-East. They have been filling their pockets with public funds while ignoring a disenchanted youth and growing anger.

Now, the Igbo youth is ready to do anything, including sacrificing their lives, to actualise the dream of an independent Biafra. Some 150 of them already died for this cause between August 2015 and August 2016. The series of military crackdowns on pro-Biafra activists was a grave error by the authorities as it has spawned clusters of bellicose Igbo youth who want to avenge their brothers’ deaths. Anyone who has physically met secessionist leader Nnamdi Kanu‘s apostles, or read their viperous online comments, will admit that quite a number of them are seething with rage that can only be thawed by the highest level of tact from the government.

A referendum on the preferred system of internal governance is crucial, even though recent calls for fiscal federalism have come from politicians who are more interested in cornering the nation's wealth than redistributing it for common good.

The absence of that kind of tact is arguably the reason for the escalation of the Biafra agitation in the last two years. After all, Kanu, the face of the secessionist movement, was little-known until October 2015 when the Muhammadu Buhari government arrested him and subsequently disobeyed court orders granting him bail.

He was eventually released in April this year, but thanks to that unlawful detention Kanu exchanged his freedom for undeserved martyrdom. Now, what should have been an intelligent campaign for self-determination has been entrusted to a man whose message is primarily driven by emotion and aggression.

The superficial argument behind this claim is that the Nigerian Constitution is unequivocal in its exclusion of secession when it states in Section 2(1) that “Nigeria is one indivisible and indissoluble sovereign state to be known by the name of the Federal Republic of Nigeria”.

But Biafra is not a fresh secessionist movement – it is a 50-year-old idea. And, regardless of the grave shortcomings of its current proponent, a 50-year-old movement cannot be dispelled with a wave of the hand or by locking up the proponent or brandishing the Constitution. The Nigerian government must come up with an agreeable, realistic and practical solution to this problem.

In its ninth section, the same constitution provides for dialogue on the possibility of amending Nigeria’s indissolubility. But for this amendment to come into force, not less than two-thirds majority of state and federal legislators must support the move. So, instead of saying an outright “no” to Biafra, Buhari and Osinbajo should remind the secessionists of what they must do: lobby the legislature. Everyone knows the success rate is negligible, if not nil, but good luck to them if they succeed.

A referendum on internal governance

Importantly and urgently, Nigeria needs a referendum. There is palpable public frustration with a governance structure that allocates the lion share of the country’s earnings to the federal government while leaving states to scramble for crumbs. A referendum on the preferred system of internal governance is crucial, even though recent calls for fiscal federalism have come from politicians who are more interested in cornering the nation’s wealth than redistributing it for common good.

Now is the time to take the decision to the public court. Some may criticise direct democracy as the “tyranny of the majority”, but there’s no other option for a Nigerian state where the tyranny of the ruling minority is monumental.

Neither history nor currency is on the side of Biafra. Only two secessionist movements have ever succeeded in Africa: Eritrea from Ethiopia after 30 years of war, and South Sudan from Sudan in 2011 after 22 years of war – the latter still as war-torn as the pre-2011 Sudan. Herein lies the lesson for Biafra agitators: Secession from Nigeria will not solve their problems unless accompanied by conscientious leadership.

Nigeria, meanwhile, must go back 50 years to draw its own lessons: These types of agitations can lead to war. If the south-easterners don’t want to stay, let them go. Fragmentation is a million times better than the devastation of war. 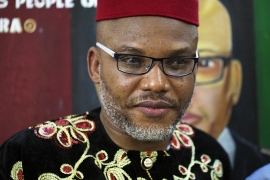 On Biafra Remembrance Day we ask pro-secessionist leader Nnamdi Kanu if the call for secession is growing louder. 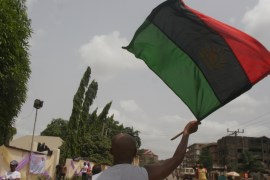