Before the recent elections, it looked like the United States was on its way to do away with private prisons.

In August, the US Department of Justice announced that it is cutting ties with prison corporations, stating: “They simply do not provide the same level of correctional services, programs, and resources; they do not save substantially on costs; and … they do not maintain the same level of safety and security.”

Subsequently, and following sustained advocacy by human rights organisations for the Department of Homeland Security (DHS) to follow suit, Jeh Johnson announced that DHS will also review its continued reliance on private corporations.

After all this controversy, one of the prison companies, the former Corrections Corporation of America’s (CCA), even changed its name to CoreCivic in an attempt to “rebrand” itself.

But once Donald Trump was announced the winner of the presidential election, there was no longer a need for rebranding.

Stock prices for the two largest private prison corporations skyrocketed at the prospect of a president who has made it clear that he is a fan of private prisons.

Trump has also vowed to lock up even greater numbers of immigrants, which will further feed the private prison industry. Currently, 73 percent of detained immigrants are held in facilities operated by corporations.

Locking up more immigrants, and expanding the private prison sector, would mean more taxpayer money spent on maintaining a failed system with a documented atrocious record of abuse, aimed at cutting corners to maximise profits and shortchange detained immigrants and workers.

US private prisons and abuse

CCA first initiated the idea of operating prisons for a profit in the early 1980s. According to one of the co-founders, the corporation was modelled on the idea that one could market prisons “just like you were selling cars, or real estate, or hamburgers.”

The founders, who were politically well-connected, took advantage of the harsher sentencing laws and the booming prison population, which surpassed the states’ designated budgets for building new prisons.

The US first contractedwith CCA in 1983 to house immigrants. In 1986, CCA went public, stating that it is more aptly suited to run large prisons because its use of electronic surveillance would mean that it can operate “with less staff than the public sector would have needed.” In fact, CCA and other prison corporations often present themselves as cost-effective alternatives to the public sector and claim that they generate benefits for local economies.

But studies have shown that private prisons, in fact, do not save money and may cost more than prisons operated by the government. In some communities, such as Hardin, Montana, the financial arrangements with prison corporations have actually hurt the fiscal standing of the locality.

Abuse in such facilities has also been well-documented. Just earlier this year, Immigration and Customs Enforcement (ICE) tried to force-feed a hunger striker, Alaa Yasin, in the CCA-run Stewart Detention Center in Georgia.

Yasin is a stateless Palestinian who was unlawfully held by ICE at Stewart, the second largest immigration detention facility in the US. He was on a hunger strike for three weeks in April and early May to protest his illegal detention.

According to US Supreme Court precedent, since his deportation was not reasonably foreseeable, the government should have let him out much earlier. Instead, the government kept him detained and attempted, without success, to obtain a court order to force-feed him. Even after Yasin agreed to eat on his own, he was still put in solitary confinement.

Detained immigrants at Stewart protested the human rights violations they face through uprisings in summer 2014 and fall 2015. Advocates have long called for this facility to be shut down, along with the many others operated by private corporations.

This is partly driven by an arbitrary congressional quota in place for detention of immigrants. On a daily basis, ICE is required to maintain 34,000 immigration detention beds. This quota does not exist in any other law enforcement context.

The quota itself can be attributed to the lobbying power of the prison corporations. According to a report by Grassroots Leadership, 58 percent of the $16,789,000 lobbying by private prison corporations from 2008 to 2014 was in quarters when they lobbied the Congressional Department of Homeland Security Appropriations Subcommittee, which decides on the quota.

Per the most recent news, the detained immigrant population will likely jump to 47,000 by June 2017, the highest number that ICE has ever held.

This lack of care for detained immigrants has had tragic consequences; at least 165 people have died in immigrant detention since 2003. One of these men was the 39-year-old Roberto Medina Martinez who died of a treatable heart infection while detained at Stewart.

Medina’s death could have been prevented were it not for the government’s negligence. An investigation following his death showed that the physician was systematically failing to conduct the required review of the medical examination information, thereby jeopardising the health of the entire detained immigrant population.

One month after Medina died,the physician left and the facility (at the time, the largest immigration detention centre in the country) was left without any doctors for more than three years.

Earlier this year, the United Nations Working Group on Arbitrary Detention visited various detention centres in the US and were able to interview currently detained immigrants. The Working Group recently released their preliminary findings; in them, it calls on the US government to reduce detention, end its use of private detention facilities, and end mandatory detention, among several other recommendations.

We should act to ensure that the administration heeds these recommendations, immediately cuts ties with private corporations, and shuts down corporate-run immigrant detention centres.

Azadeh Shahshahani is the Legal and Advocacy Director with Project South and a past president of the National Lawyers Guild. 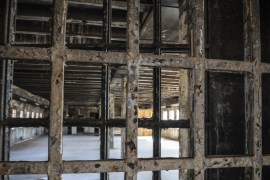 A look into the 1980 Old Main prison riot and the resulting institutionalisation of solitary confinement in US prisons. 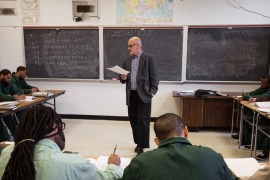 The whiff of reform drifts into US prisons

Al Jazeera visited a US prison to see whether inmates thought the era of mass incarceration was coming to an end.

The ‘sunk costs’ of a profit-driven prison system