At the moment, 16-year-olds in Nepal are sitting exams for the School Leaving Certificate (SLC); the so-called “iron gate” which will decide whether they lead lives of uneducated futility, or are allowed to pass on to – possibly – better things.

Most have little reason to be hopeful. Last year only 13 per cent of government school students who had enrolled 10 years earlier passed the SLC. The rest either failed or had already dropped out.

Yet the education system in Nepal has been receiving foreign aid and technical advice since the 1950s. We’re now past half way through the donors’ much vaunted “School Sector Reform Programme”, which itself is supposedly building upon the achievements of the previous “Education for All Programme”. What’s going on?

Nepal has been receiving foreign aid for over 60 years; generally running at fairly stable levels, currently worth over $1bn a year, contributing about a quarter of the government budget.

Over the years various theories, claims, working methods, and targets, have been raised, dropped and recycled, but, despite some gains, achievements has fallen far short of what’s been promised.

In 1991 a publication of USAID, the US government’s development agency, predicted that with “an increased understanding of the need to follow market principles … we are hopeful that by the year 2001 … we will see Nepal graduate from the ranks of the least developed countries”.

Nepal is now hoping to graduate from the ranks of Least Developed Countries in 2022. And, on current form, it’s likely to miss that target, possibly becoming (along with Afghanistan) one of the last two LDCs left in Asia.

What’s to blame? The war is part of it. A decade of Maoist insurgency from 1996 to 2006 killed 17,000 people and hindered economic activity. Yet during the conflict GDP growth fluctuated within a similar range to before and after. Infrastructure was destroyed, but there wasn’t much in the first place and – thanks to public corruption – much of it has been rebuilt twice-over. The quality of village schools and health posts was as wretched before the war began as it is now, almost a decade since it ended. Nepal suffered conflict, but many Asian countries that have developed more successfully have suffered worse.

For the most part, of course, the country’s rulers are to blame – and they have conducted themselves in a similar manner for decades. There is hardly a politician in the country who can plausibly claim to have seriously pursued “economic viability” (the latest slogan) in the course of his long career.

By pumping in money without achievements to match, the donors partly contribute to making extractive politics sustainable. They should recognise that when a scheme doesn't deliver the promised results, the money has still paid for something: such as the empowerment of the corrupt ...

Rather, the government is run as an extractive enterprise, in which the various parties and factions are built on pyramids of graft, commissions, and the sale of offices. Useful public institutions such as the education ministry, the university, the electricity board, the national airline, or the airport, have been hollowed out and left semi-functional.

In the private sector, the party bosses give political backing to cartels, syndicates and “mafias” which, for example, manipulate prices and operate monopolies in the drinking-water, food, transport and energy markets. They profit from the fact that the health and education sectors are dysfunctional.

Despite the donors’ talk of Nepal being “fragile”, there is in fact notability stability at the heart of the state, both in the way it works and the individuals who run it. Most have careers at the top spanning decades, and many are the children or relatives of other powerful people.

The donors are also wrong to believe (as they often do) that the government “doesn’t understand” what it is doing, or “needs educating”. When it comes to serving their own interests, and those of their core constituents, the country’s leaders are successful. Unfortunately for most Nepalis, providing “development” for the wider public is often in conflict with those interests.

And yet the donors continue to pour money in. The United States, European Union and Britain all recently announced major increases. Meanwhile, over the past few years, Nepal has plummeted down the Transparency International corruption table, as the rival political parties alternately feuded and collaborated to divide the spoils.

In fact, the government doesn’t have the capacity to spend the development money it already has. Despite rampant mismanagement, and a splurge at the end of every year timed to escape scrutiny, around a quarter of the funds reserved for capital investment remain unspent annually.

The donors know this, but they measure their success, and their managers move on in their careers, by growing their budgets and disbursing their funds. Like the government, they also struggle to spend the money they have. As the end of every year comes around there are frantic meetings in the donor offices, over how they can dispose of their unspent budget before next year’s (increased) budget is due. (Apparently, the same thing also happens back home in headquarters)

In other words, the donors are dependent on their recipients. If they started calling time on corrupt or underperforming projects it would be even harder for them to work. Hence there are very few examples of the donors taking a strong, public stand on anti-corruption measures. The public perception is of a great deal corruption not only in government, but in the development industry itself.

There’s little reason to think that the current batch of projects and programmes will be more successful than those of the past. Many – such as in education – are already long running scandals. Few are truly new ideas.

The shoulders of giants

Instead, the donors claim credit for gains that probably do not come primarily through their work. The main reason for recent progress in poverty alleviation is clearly remittances from migrant labourers, which have risen rapidly to be worth around 25 per cent of GDP. Nepali workers go abroad because the domestic economy is ruined, and the money they send home is spent on private health and education, because the donor-supported public sector is useless.

Nepal’s problem is not a want of aid or technical advice. It is political. And if the donors are to be part of the solution, they must be brave enough to publicly demand meaningful action against the entrenched public corruption, the cartels, “syndicates” and “mafias” which are keeping the country poor.

By pumping in money without achievements to match, the donors partly contribute to making extractive politics sustainable. They should recognise that when a scheme doesn’t deliver the promised results, the money has still paid for something: such as the empowerment of the corrupt, deeper inequality, and loss of public faith.

They should be far more willing to withdraw from corrupt schemes, and explain why. They should gather evidence and give it to the police. And they must take action to expose and punish the corruption in the bloated and underperforming development industry itself, which everyone knows exists.

To do so would require a willingness to spend less money, and to take responsibility for what’s not working, instead of only claiming credit for any sign of improvement.

Thomas Bell has reported on Nepal for over a decade. His new book of history and reportage, ‘Kathmandu’, is published by Random House India. 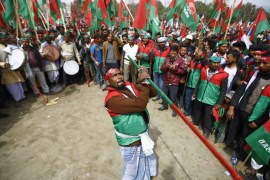 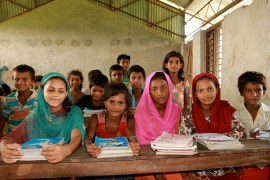 School for a dollar

One man is leading a mission to wipe out illiteracy in Nepal with low cost private education.