It was not my first time walking up the dusty path towards the gate of Camp Echo at Guantanamo. Over the past decade, in nearly 40 trips to the prison, I’ve lost count of the number of times I’ve walked that way, heading to or from meetings with shackled clients.

But this was no ordinary client meeting: I had come to inform my client Shaker Aamer that, after 13 years in captivity without charge, trial, or fair process, he was about to be set free and returned to his wife and their four children in Britain.

News had broken that morning, over a month ago now, on September 25, that the Unites States defence secretary had forwarded a notification to Congress of the US government’s intent to transfer Shaker to Britain.

Under US law, that notification begins a 30-day countdown. At the end of that period, around October 24th, the path would be clear for Shaker’s release. His return home could take place anytime on or after that date.

Still, the routine remained all too familiar. The soldiers rifled through my legal papers then “wanded” me for metal contraband before escorting me through another set of clanking iron gates to one of the plywood shacks where attorney-client meetings take place in Guantanamo.

Shaker was sitting, shackled by one ankle to a steel loop jutting out of the shack’s flooring. He wore jumpsuit pants in the signature Guantanamo orange. He had taken off the top, however, because of the tropical heat, and was in a sleeveless white undershirt.

His beard thick and dark, his long hair braided neatly and resting over his right shoulder, Shaker also sported a knitted white Muslim prayer cap, off to the side. This was exactly how he wore his cap when we first met in that shack almost four years earlier in October 2011.

As I looked at Shaker in that shack in Cuba last month and thought of all the years he had spent in captivity, all he had lost, the horrendous abuse he had survived, how mightily he had struggled to preserve his dignity, one thing became obvious: He should get to leave Guantanamo and go home on his own terms. It's the least we can do for him.

He stood up to shake my hand, and we exchanged customary holiday greetings as it was Eid al-Adha, the most important holiday on the Muslim calendar. I sat down, inhaled deeply, paused, and said in Arabic: “Shaker, finally, the end of your ordeal seems near.” I then explained that morning’s news and its implications as clearly as I could.

Shaker sat silently with a blank stare on his face. After a few, long seconds, he began to tell me about his prison-issued shoes, how they were falling apart, held together only by duct tape. He took off and held up the black sneakers, unravelling the tape. They were tattered and dismembered as a beggar’s. The Guantanamo prison administration had not replaced them since 2010.

It dawned on me that my news of his impending release didn’t register; it simply washed over him, leaving no trace. After 14 endless years, the only normal reaction would be to grasp onto something he knew to be concrete and real: the problem of these shoes in this prison.

I decided to interrupt his disquisition about the shoes. “Shaker,” I said, “please listen to me carefully.” And I repeated everything I had shared earlier. Shaker looked at me, his eyes wide, and asked: “Are you being serious right now?” Then an impossibly large smile lit up his face, and his gaze suddenly grew distant. A door had finally swung open, and he was looking ahead at everything that lay beyond.

Also read: If the war is over, why am I still here?

Laughing at his own earlier digression, Shaker quipped that the Guantanamo prison administration now had no choice but to issue him new shoes – they couldn’t possibly risk embarrassment by letting him return to the United Kingdom with these hideous things on his feet!

He also expressed hope that it would be a British plane – not an American military plane – that would take him home. The last thing Shaker wanted was to relive his terrifying flight to Cuba over a decade ago, where he was chained in a painful position, blindfolded, earmuffed, and cold.

Shaker shared with me that he hadn’t slept properly in almost an entire month, the uncertainty of his situation gnawing away at his rest. The night before our morning meeting he had barely slept two hours.

In the morning, the soldiers moving him from his cellblock to Camp Echo insisted on conducting a groin search for the first time in weeks. One guard asked Shaker if he wanted to “refuse” his legal meeting in order to avoid the humiliating search. Shaker wondered if the prison administration wanted to keep the news from him by preventing our meeting.

We spent the remainder of our time together contemplating Shaker’s return home. Overjoyed though he felt, like many past clients, Shaker was discovering that the prospect of life after Guantanamo is not free of worry. Naturally, Shaker is anxious as well. He knows that his reintegration into his family’s life and into society at large will be challenging at times.

On Friday, Shaker had finally gone home. The first part of his new journey began as he wished: in a British plane, not an American one. But I fully expect that for Shaker – no less than other released prisoners I’ve represented in the past – the combination of joy and dread rushing through his mind will be challenging to manage in the coming days.

Shaker and his family will need time and privacy to overcome that challenge and slowly begin to rebuild their lives together. He hopes that the good people in the US and Britain who protested and clamoured on his behalf for years will understand his desire to avoid publicity as he takes his first tentative steps as a free man and embarks on the lengthy process of getting reacquainted with his loved ones.

Of course, Shaker is infinitely grateful to his supporters everywhere, and to his legal team, for all they have done over these long years in the name of justice. He hopes to thank everyone directly, in due time.

But, now that he has been released, Shaker asks for everyone’s patience and forbearance as he and his family take the time they need to heal and adjust, away from the spotlight.

As I looked at Shaker in that shack in Cuba last month and thought of all the years he had spent in captivity, all he had lost, the horrendous abuse he had survived, how mightily he had struggled to preserve his dignity, one thing became obvious:

Shaker Aamer should get to leave Guantanamo and go home on his own terms. It’s the least we can do for him.

Ramzi Kassem is associate professor of law at the City University of New York School of Law. 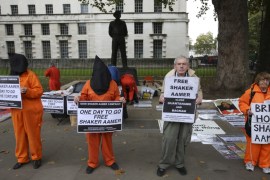 British resident originally from Saudi Arabia had been held without charge at US military prison. 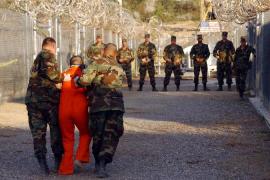