Ukraine has started the new year with a major attack that killed many Russian soldiers in their barracks, and with a defensive victory – its air force said it managed to shoot down all the Iranian drones Russia launched against Ukrainian infrastructure since the beginning of the year.

Ukraine launched six artillery rockets at a barracks in Makiivka, in the Donetsk region, using its US-supplied HIMARS system a couple of minutes into New Year’s Day.

Four of the rockets got through air defences, the Russian defence ministry admitted, striking their target.

Russia acknowledged 63 deaths two days after the strike, later raising that number to 89.

But video of the wreckage showed that the temporary barracks, a former vocational school, had been almost completely flattened, suggesting that casualties may be much higher and it may take time to extract bodies.

Ukraine said the soldiers were being housed alongside a major ammunition dump, which detonated, and claimed an estimated 400 Russian soldiers killed and 300 wounded.

The strike caused a furore among Russian military reporters and lawmakers, who called for the resignation of Denis Pushilin, the leader of the self-proclaimed Donetsk People’s Republic, though he is not technically part of the Russian military hierarchy.

Donetsk law enforcement tried to deflect blame by suggesting that the soldiers themselves were to blame for using their mobile phones, enabling Ukrainian electronic surveillance to track them.

“Preliminarily, the reason for the HIMARS hit was the active use of mobile phones by the [newly] arrived military personnel. The enemy, using the ECHELON reconnaissance complex, revealed the activity of cellular communications and the location of subscribers,” a source told Russia’s Tass news agency.

Ukraine said it had scored some success on the ground as well.

Brigadier-General Oleksiy Gromov said Ukrainian ground forces had advanced 2.5km (1.5 miles) towards the occupied town of Kreminna in Luhansk region over the last week of 2022, and were continuing to make progress.

Military analysts have opined that if Ukraine were to recapture Kreminna and Svatove, both just a few kilometres from the line of contact in Luhansk, they could roll over a 40km (25 miles) section of territory before reaching the next natural Russian defensive position in a counteroffensive similar to that which retook much of Kharkiv region last September.

“In the event of a breakthrough … of the defensive lines of the Russian occupying forces on the Svatove-Kreminna line and, accordingly, the transfer of hostilities closer to the city of Luhansk, a significant part of the servicemen of the units of the 2nd Army Corps, especially among those mobilised for temporary occupied territories, plans to surrender,” Gromov said.

Luhansk Governor Serhiy Haidai said Ukraine could capture Kreminna as early as the beginning of 2023.

Ukraine’s military intelligence chief Kyrylo Budanov told the BBC that the two sides were in an effective stalemate for now, and that hardware would make the difference.

“The situation is just stuck,” Budanov said. “We can’t defeat them in all directions comprehensively. Neither can they … We’re very much looking forward to new weapons supplies, and to the arrival of more advanced weapons.”

Russia was not idle on the last day of 2022, pounding Ukraine with drone and missile fire, albeit at a slightly reduced intensity.

Ukraine said it shot down all 13 drones launched by Russia, and 12 out of 20 cruise missiles. Eight people were injured when one of the missiles hit a residential building. More drones were to follow overnight, and Ukraine declared on January 1 that it had shot down all 45 Shahed-136 drones Russia had sent on New Year’s Eve.

Ukraine reported it shot down a further 39 drones launched on New Year’s Day.

By January 2, Ukraine said it maintained a 100 percent kill rate against enemy drones, a rate “never achieved before” according to air force spokesman Yuri Ignat.

“Only two days have passed since the beginning of the year and the number of Iranian drones shot down over Ukraine is already more than 80,” Ukrainian President Volodymyr Zelenskyy said in his nightly video address on January 2.

“We have information that Russia is planning a lasting attack by the Shahed drones, he said. “Her bet might be on exhaustion. On the exhaustion of our people, our air defence, our energy. But we must and will make sure that this terrorist goal fails like all the others.”

Ukraine’s air defences have been strengthened in recent weeks by at least two NASAMS and one IRIS-T air defence systems. But even without those, Ukraine’s air force had begun to develop ground-breaking countermeasures that were effective against drones and cruise missiles, the latter being notoriously difficult to stop.

On December 29, for example, Ukrainian officials reported that their forces shot down 54 out of 69 cruise missiles Russian forces launched, and 11 out of 23 drones. 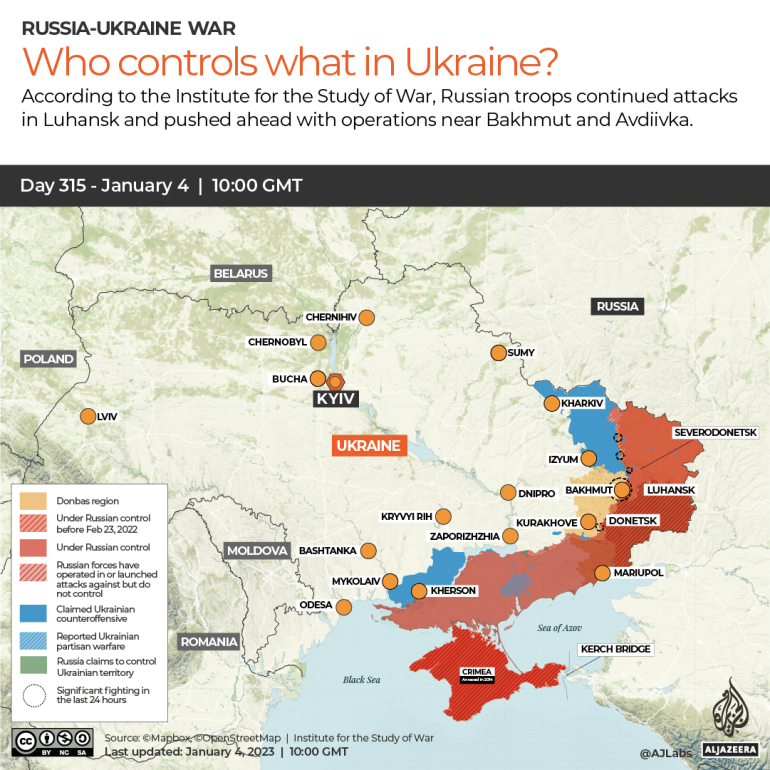 Ukraine has also made it a priority to remind Russia that it is not itself immune to long-range air raids.

On December 29, Ukraine attacked Engels airbase in Russian territory with a drone, three days after causing three deaths there with a similar attack. Engels houses some of Russia’s long-range strategic bomber fleet. Ukraine had killed another three servicemen at Engels and Dyagilevo bases on December 5.

The British Ministry of Defence (MoD) said Moscow “is struggling to counter air threats deep inside Russia”, with air defence systems such as the Pantsir needed to protect forward field headquarters in or near Ukraine.

Who has the greater staying power in weapons and troops?

There has been an ongoing discussion among military observers about Russia’s ability to generate firepower and manpower. Ukraine has devastated both with precision strikes, like that on Makiivka, since July thanks to deliveries of HIMARS rocket systems.

The UK MoD agreed that  “shortage of munitions likely remains the key limiting factor” on Russia, which was “unlikely to have increased its stockpile of artillery munitions enough to enable large scale offensive operations”, given that “even just sustaining defensive operations along its lengthy front line requires a significant daily expenditure of shells and rockets”.

Russia has been buying artillery rounds from Belarus and North Korea to supplement large losses of ammunition dumps near the front.

But one Ukrainian official warned against complacency.

“One should not underestimate the resource of the Russian Federation as a state in general. Perhaps they are not capable of conducting hostilities with the same intensity as before, but, unfortunately, they still have enough reserves, and in no way can they relax,” said Deputy Defence Minister Hanna Malyar in a telethon.

Maintaining manpower has been a challenge for both sides. Ukraine has mandated conscription since the early days of the war, but Russia delayed mobilisation, an unpopular measure, until September and October, when it enlisted 300,000 men for the war.

Russia’s defence ministry said its regular autumn conscription had enlisted 120,000 men in November. The announcement emphasised that the conscripts were not destined for Ukraine, and would receive five months’ training on “modern weapons and military equipment”.

“Citizens called up for military service are not involved in the special military operation in Ukraine, and conscripted servicemen who have served the established terms of military service are dismissed in a timely manner and sent to their places of residence,” the ministry said.

The delay in mobilising troops and the assurances that regular cycle conscripts would not be sent to Ukraine could be signs of growing unease with the war in Russia.

Ukrainian Defence Minister Oleksiy Reznikov cast doubt on Russia’s reassurances, saying that Russia was in such need of manpower, it was about to declare martial law, close its borders to men of military service age and conduct a new mobilisation a week or so into the new year.

Meanwhile, Russian Foreign Minister Sergey Lavrov said in an interview that Moscow will not accept a peace plan Zelenskyy proposed in early November, in the first official Russian rebuttal of its specific terms.

The Kremlin rejects conditions that Russian troops withdraw to 1991 boundaries, that Russia pay Ukraine reparations, and that it participate in an international criminal tribunal at the Hague.