On Monday morning, a deafening roar that sounded like a landing jet plane woke up a town spreadeagled in the flat steppes of the Volga River region.

According to surveillance camera footage, a lightning-like flash followed by a thunderous explosion shook Engels, named after the philosopher and home to more than 300,000 people.

It hit one of Russia’s largest and most important military airfields that hosts strategic Tupolev Tu-160 and Tu-95 bombers. 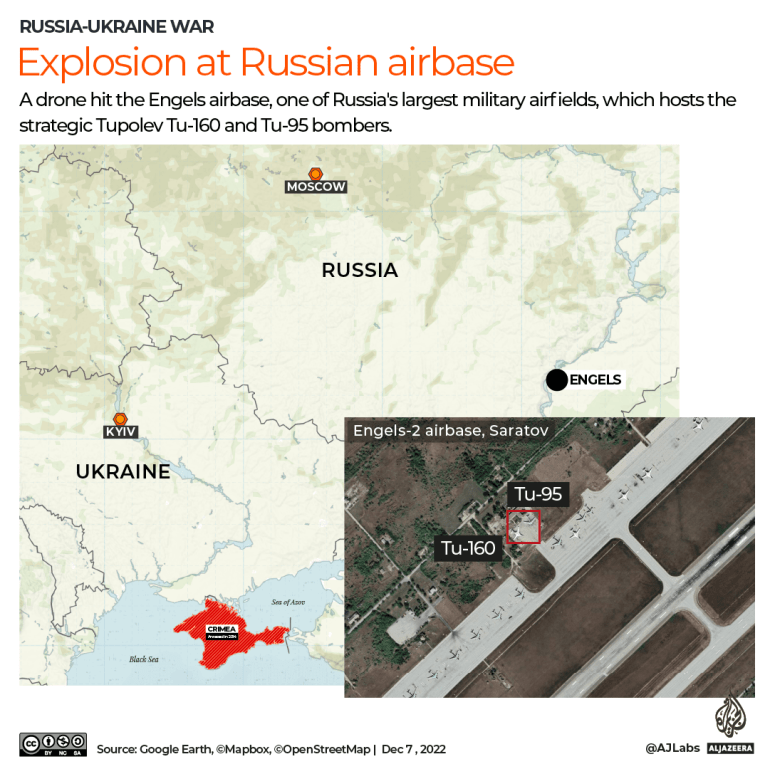 The planes are capable of carrying nuclear warheads, and Moscow has repeatedly used them to rain non-nuclear missiles on Ukraine.

Kyiv has not claimed responsibility, but if it is confirmed to be behind them, as is widely believed, they would mark the deepest assaults in Russia since its war began in February.

Since October 10, seven waves of attacks have killed civilians and destroyed or damaged houses, power stations and other infrastructure needed to keep millions of Ukrainians safe from winter.

Located some 650km (404 miles) from the easternmost part of the Kharkiv region controlled by Kyiv, the Engels airfield was seen as a safe hideout Ukraine could not possibly reach.

Not any more – according to a top military analyst in Ukraine.

“This is a historic moment, unexpected not only for our foes, whose plans have been thwarted but also for allies” in the West, Lieutenant General Ihor Romanenko, Ukraine’s former deputy chief of general staff, told Al Jazeera.

The new weapon can reach most of western Russia, including Moscow, the lower Volga River region, as well as annexed Crimea, where Russia’s Black Sea fleet is stationed.

“The weapon is powerful and precise enough to deliver serious damage, including striking anything related to oil, chemicals and energy, as well as large bridges – for example, across the Volga,” Nikolay Mitrokhin, a historian with Germany’s Bremen University, told Al Jazeera.

Four Russian cities with a population of more than a million stand on the Volga, Europe’s longest river.

For centuries, Russians saw it as their most important and symbolic water artery – and often referred to it as “matushka,” or “dear mother”.

Volga’s tributaries include the Moskva, the river that zigzags through Moscow providing water to its 12 million residents.

Moscow’s Great Prince Ivan the Terrible proclaimed himself tsar only after conquering the Volga basin, and during World War II, evacuation “behind the Volga” meant safety from Nazi German air raids.

Dozens of Soviet plants and factories were moved there, turning the region into the USSR’s paramount industrial belt that still churns out cars, textiles, chemicals, plastics and petrol.

Now, any of these plants could be destroyed or damaged.

“Russia will have to fully reconsider its air and missile defence conceptions, something that will take time and won’t guarantee any safety anyway, and count the losses,” Mitrokhin said.

Moreover, tens of millions of everyday Russians will not feel safe any more.

“Residents of those areas, including Muskovites, should realise that at some moment, a ‘mushroom’ of an explosion can grow outside their window, and something dangerous will start burning,” Mitrokhin said.

Bot so far, the damage from the alleged Ukrainian raids was more symbolic.

Two Tu-95 bombers were damaged at the Engels airbase and a fuel truck burned down at the Dyagilevo airbase in Ryazan, Russian officials said.

At least three servicemen were killed and some were wounded, they said.

The attacks did not prevent dozens of planes from taking off and bombing Ukraine yet again on Monday.

Moscow, blaming Kyiv, said they were carried out by “Soviet-made jet drones” that were shot down before reaching their targets.

Officials in Kyiv flatly denied responsibility – and used all shades of irony and sarcasm in their responses.

“The Earth is round,” Mykhailo Podolyak, an adviser to Ukrainian President Volodymyr Zelenskyy, wrote on Twitter on Monday.

“It’s a pity they don’t study astronomy in the Kremlin, preferring court astrologers. Otherwise, they would’ve known that if you send something to other nation’s airspace, sooner or later, the aircraft gets back,” he wrote.

“No matter what the enemy wants [to say] – we haven’t started anything yet,” Defence Ministry spokesman Yuri Ihnat said in televised remarks on Monday.

His words deliberately mimicked Russian President Vladimir Putin, who said in July that Russia “hasn’t started anything serious in Ukraine yet.”

The comments continued a new Ukrainian tradition of ridiculing and vilifying Russia and its servicemen but did not shed any light on the weapon’s identity.

However, Russian comments about the “Soviet-made jet drone” offered a clue.

The USSR has only developed one.

The Tu-141 reconnaissance drone code-named “Strizh” (Swift) was made public in 1979, the year Moscow invaded Afghanistan.

Almost 15-metres (49 feet) long, it has a rear-mounted delta wing with a span of fewer than four metres (13.1 feet) and weighs about six tonnes.

The drone can rise up to six kilometres (37 miles) above the earth – but can also move at a mere 50 metres (164 feet) above it, significantly complicating the work of Russian air defence.

Most importantly, the Strizh was produced in Kharkiv, Ukraine’s second-largest city, and the 2014 revival of its production may have been relatively easy.

In October, Ukroboronprom, Ukraine’s state-run weapons consortium, said that it was developing a heavy drone that could carry almost 75 kilograms (165 pounds) of explosives. No further details were available.

“We are telling you almost nothing, but this ‘nothing’ successfully works on the battlefield,” Ukroboronprom’s spokeswoman Natalya Sad said in televised remarks.

She did not respond to Al Jazeera’s request for comment.

Lieutenant General Romanenko said that the Strizh “may have been used” to develop the new drone.

The drone attacks send a worrying signal to Moscow.

“It surely must make the Kremlin worried, especially those who don’t have a place in the bunker,” Sergey Bizyukin, an exiled opposition activist from Ryazan, where one of the bombed airfields is located, told Al Jazeera

But for now, everyday Russians are less concerned about the attacks as they are preoccupied with the “partial mobilisation.”

Moscow has herded hundreds of thousands of men to the front line in a bid to boost its war effort.

Kremlin-controlled media downplay defeats in Ukraine, and only the worsening economic situation could trigger protests among Russians, Bizyukin said

“The rest will understand when their fridges will start getting empty,” he said.

When Moscow backed separatists in southeastern Ukraine in 2014, observers compared the conflict to “two Soviet armies” fighting each other.

But since Ukraine increasingly relies on Western-supplied, NATO-approved weaponry, the comparison remains true only when it comes to sophisticated airborne weaponry.

The West refused to supply modern warplanes and air defence systems, and what it did provide was “a drop in the sea,” said Romanenko, who specialised in air defence during his 40 years of service in the Soviet and Ukrainian military.

The 16 Tu-160 bombers used to bomb Ukraine are among the world’s heaviest and fastest supersonic warplanes.

The irony is that half of them used to belong to Kyiv.

But President Leonid Kuchma’s cash-strapped government decided in the late 1990s that they were unnecessary and too expensive to service.

In late 1999 and early 2000, the planes took off from the Priluky airbase in northern Ukraine to land on the Engels airfield as part of Kyiv’s payment for Russian natural gas.

“[Russia] will most probably strengthen their air defence tools, boost them, because airfields are equipped for a certain type of planes,” Romanenko said.

“Let them have headaches and sleep bad at night.”