Kyiv, Ukraine – Russia’s new top general has visited the front lines in Ukraine only once during Moscow’s nearly year-long invasion – in May.

And according to some reports, Valery Gerasimov, the man now in charge of troubleshooting the dragging conflict, objected to the war before it began.

The 67-year-old chief of the General Staff and now Russia’s most senior general has been at the helm of what the Kremlin dubs a “special military operation” in Ukraine since Wednesday, replacing Sergey Surovikin, who held the role for just three months and oversaw the massive shelling of energy infrastructure and civilian sites in Ukraine.

“Gerasimov didn’t plan and categorically rejected [the war],” said Anatoly Lopata, who served as Ukraine’s deputy defence minister and chief of the General Staff in the 1990s.

Gerasimov’s alleged resistance contradicted the opinion of his boss, defence minister Sergei Shoigu, who was among a tiny circle of top officials who planned the invasion that caught most of the Kremlin by surprise.

But despite his objections, Gerasimov and the rest of Russia’s top brass opposed to the war embraced it in the end.

The military shake-up followed months of setbacks for Russian troops in Ukraine and comes amid a resumption of hostilities, as plummeting temperatures freeze the sludgy ground and make the movement of tanks and other armoured vehicles possible. 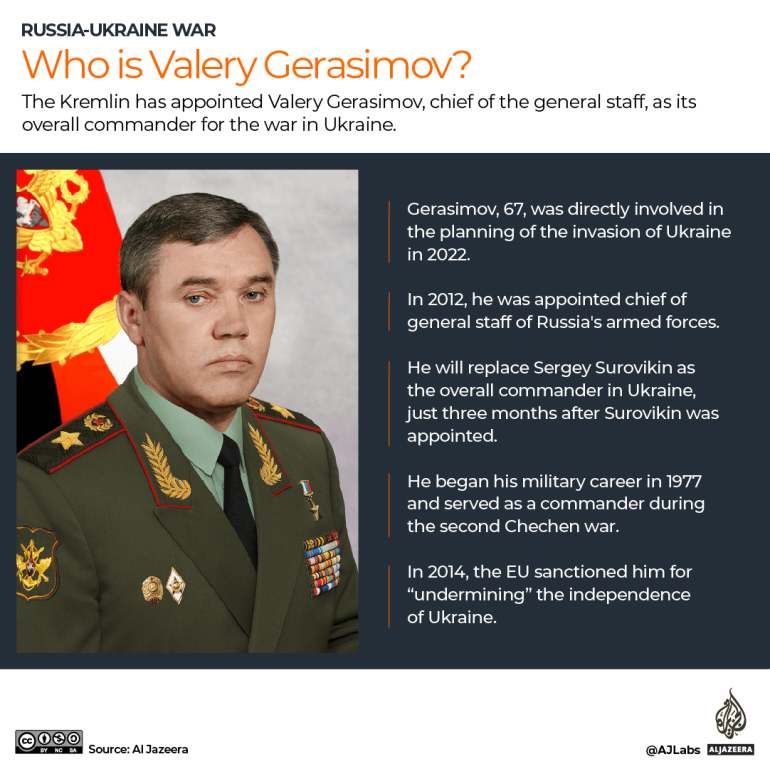 According to Nikolay Mitrokhin, a historian at Germany’s Bremen University, the reshuffle signals Moscow’s failure to organise a new offensive on Kyiv and northern Ukraine.

“It became finally clear that Russia failed its own plans to start a massive offensive in January,” he told Al Jazeera.

Military and defence contractors could not provide enough equipment and top officials have been touring military plants and threatening their managers, he said.

And despite months-long attempts and heavy losses, Russian forces failed to take the eastern city of Bakhmut and switched to nearby Soledar, the salt-mining town with a pre-war population of 10,000 which they ultimately claimed to have captured late on Thursday.

The demoted general, Surovikin, struggled to manage the deployment of tens of thousands of newly mobilised and largely untrained Russian men.

On New Year’s Eve, up to 400 such newcomers were amassed in a single building in the eastern town of Makiivka, and were killed by a Ukrainian attack, Kyiv said.

Russia, which rarely acknowledges huge losses, admitted 89 deaths and blamed its troops for identifying themselves to the enemy having used mobile phones without authorisation.

The new offensive has most likely been postponed until late February but such a late start may mean the armoured vehicles will get stuck in thawing soil, Mitrokhin said.

A Ukrainian pundit agreed that Gerasimov’s appointment may herald a new phase in the war.

Hundreds of kilometres away from Ukraine, another battle is raging – a turf war within the Kremlin walls for access to President Vladimir Putin that translates into more funding and power.

The warring clans include Putin’s former colleagues and country-club neighbours whom he appointed to top positions in the 2000s. They are competing with younger technocrats he started to promote in the past decade.

One of the new clans in the corridors of power has been forged between Putin’s “chef” and “bulldog”.

The “chef” is Yevgeny Prigozhin, a former criminal convicted of robbery and fraud in the 1980s who used his prison experiences to find new recruits for the war.

Prigozhin earned his nickname after winning countless catering contracts since the early 2000s.

He then started the Wagner Group, a private military army that cut its teeth on the front lines of Ukraine’s 2014 separatist war and in Syria.

Apart from thousands of mercenaries, Prigozhin began to enlist tens of thousands of inmates from Russian jails, promising them amnesty and hefty salaries.

One of them, Sergey Molodtsov, who was sentenced to 11.5 years for killing his mother, was killed in eastern Ukraine and buried in the western town of Serov this week.

Prigozhin has claimed that his forces spearheaded Russia’s offensive in southeastern Ukraine and said they single-handedly took the town of Soledar.

General Surovikin reportedly was the “chef’s” most trusted ally within the top brass.

But Prigozhin’s biggest ally has been Chechen strongman Ramzan Kadyrov, dubbed “Putin’s bulldog”, who also boasted of sending his loyalists to the trenches, although their real role has been disputed and even ridiculed.

Both Prigozhin and Kadyrov have been at odds with Russia’s top brass over funding and their role in the campaign.

Western analysts have viewed Gerasimov’s rise as a warning signal to Prigozhin.

Gerasimov’s appointment is a “political decision to reassert the primacy of the Russian Defense Ministry in an internal Russian power struggle”, the Institute for the Study of War, an international group of military analysts, said on Wednesday.

But the top brass has been divided, too.

The animosity between Shoigu and Gerasimov dates back to 2012.

Gerasimov “a priori can’t be on friendly terms with Shoigu”, a minor Communist official and construction manager who headed Russia’s Ministry of Emergency Situations from 1994, Ukraine’s Lopata said.

Shoigu’s appointment to defence minister in 2012 would likely have antagonised Russia’s entire top brass, said Lopata, who met Gerasimov in the 1990s.

Gerasimov “was a reasonable man, not stupid, not a saboteur. He belongs to the caste of military leaders”, he said.

This “caste”, who began their careers in the late Soviet era, felt sidelined when Putin initiated military reforms and dramatically reduced the size of Russia’s armed forces.

Shoigu oversaw the annexation of Crimea and Russia’s support for separatists in southeastern Ukraine in 2014.

But Gerasimov was behind the actual planning and, in 2015, Ukrainian prosecutors called him the “chief ideologue” of the separatist war that killed more than 13,000 and uprooted millions.

However, many separatists have been highly sceptical of Gerasimov.

“I am in a sacred awe awaiting the new outstanding victories that will be achieved by this widely recognised military genius,” Igor Strelkov, a former “defence minister” of separatists in Donetsk wrote sarcastically on Telegram on Thursday.

And many in Ukraine, where resistance and hope remain strong, agree the new commander will fail to stop Russia from losing the war.

“It doesn’t really matter who commands, it just shows that Russia is in a difficult position regarding successes, potential successes in Ukraine,” Oleksiy Haran, a politics professor at the Kyiv Mohila Academy, told Al Jazeera.