Belarus may enter the Ukrainian conflict if Kyiv decides to “invade” either Belarus or Russia, a Russian foreign ministry official has said.

In an interview with state media aired on Friday, Aleksey Polishchuk said that looming Russian military drills with Belarus were designed to prevent escalation, but warned there was potential for Moscow’s closest ally to join the war effort.

“From a legal point of view, the use of military force by the Kyiv regime or the invasion of the territory of Belarus or Russia by the armed forces of Ukraine are sufficient grounds for a collective response,” Polishchuk told the state-owned TASS news agency.

Russia used Belarus as a springboard to invade Ukraine last February, deploying thousands of forces to its neighbour under the pretext of military drills before launching its offensive.

The two countries have since agreed to intensify their military cooperation and plan to hold joint aviation exercises in Belarus next week.

The drills have fuelled speculation that Moscow could use its close ally to launch a new offensive on Ukraine from the north in the near future, opening up a new front. 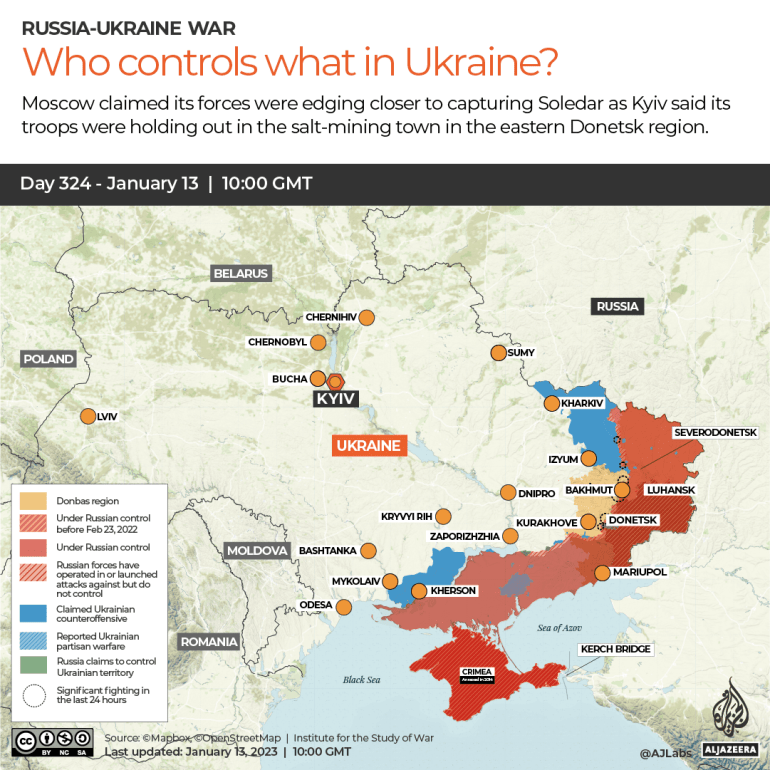 But Ukrainian officials talked down the prospect of an attack from Belarus linked to the upcoming exercises.

“I would not associate these exercises of the air force, which will be on the territory of Belarus, with massive missile strikes,” Serhiy Popko, the head of the Kyiv military administration, said on Friday.

President Volodymyr Zelenskyy said on Wednesday that while Ukraine should be ready at its border with Belarus, “We understand that apart from powerful statements, we do not see anything powerful there.”

Belarus has backed Russia over its invasion of Ukraine but repeatedly ruled out joining the conflict.

According to Kyiv, Russia continues to use Belarusian airspace for drone and missile attacks.

Last month, Belarus summoned Ukraine’s ambassador to the country after saying Minsk had downed a Ukrainian S-300 air defence missile in a field.

Ukraine’s defence ministry said it would investigate the incident and suggested it may have been a Russian provocation.

The missile had come down as Russia was firing at cities across Ukraine, in one of the biggest waves of attacks since the beginning of the conflict.