The effect of the sanctions was felt on global markets, as oil prices soared well above $120 a barrel.

On the ground, Russian forces continued to advance in southern Ukraine but made slow progress elsewhere amid fierce Ukrainian resistance. Russian troops captured the strategic city of Kherson on the Black Sea, but have yet to take any other urban centres, instead besieging and shelling cities and driving the number of refugees past the two million mark.

The severance of Russia’s commercial ties with the West, which began with financial and technology sanctions in the first week of the war, deepened in the second week.

There was an information decoupling, as Russia blocked access to Facebook, Twitter, the US-funded Voice of America, Deutsche Welle and the BBC, among others, in retaliation for the banning of state-run media Sputnik and Russia Today in Europe. US brands McDonald’s, Starbucks, Pepsi and Coca Cola halted trading in Russia.

“Western businesses are completely caught up in a race to demonstrate their revulsion towards what’s going on in Ukraine,” said former UK ambassador David Landsman. “They are withdrawing in large numbers. It’s hard to see them returning any time soon unless there is some sort of compromise negotiated settlement in due course between Ukraine and Russia,” he told Al Jazeera.

Russian airline Aeroflot stopped international flights on March 8 for fear of having its aircraft impounded, after several countries said they would close their airspace to Russian airlines.

A new round of sanctions targeting Russia’s energy sector was announced on March 8, as the US said it will stop Russian oil imports and the European Union unveiled a plan to reduce Russian oil and gas imports by two-thirds across a year. 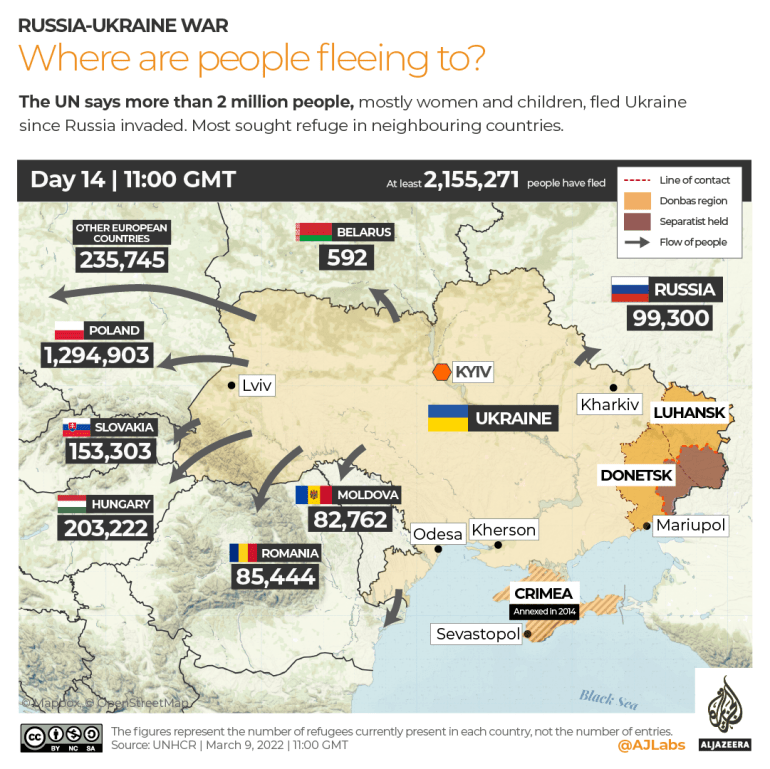 “The quicker we switch to renewables and hydrogen, combined with more energy efficiency, the quicker we will be truly independent and master of our own energy system,” she said.

The Commission says it already planned to reduce gas consumption by 100bn cubic metres by 2030 for environmental reasons. The new REPowerEU plan would increase that by half – equivalent to the volume the EU imported from Russia last year.

“It is absolutely clear that a rejection of Russian oil would lead to catastrophic consequences for the global market,” said Russian Deputy Prime Minister Alexander Novak on state television. “The surge in prices would be unpredictable. It would be $300 per barrel if not more.”

The US and EU annoucements helped drive Brent crude oil prices to $126 a barrel by March 8.

Slow progress in the ground war

Overnight on March 2, Russian forces captured the strategic city of Kherson on the Black Sea, the first major city to fall during the war. Elsewhere, Russian troops have besieged urban centres and subjected some to relentless bombardment as Ukrainian resistance appeared to remain strong.

A Russian convoy 65km (40 miles) long has been bogged down in towns northwest of Kyiv, unable to enter the capital. The eastern city of Kharkiv has resisted ferocious attempts to take it. An adviser to Zelenskyy described Kharkiv as “the Stalingrad of the 21st century,” a reference to the city in which heroic Russian resistance turned the tide of World War II.

Also emblematic of Ukrainian resistance has been Mariupol, surrounded by the Russians since March 2. Six days later, a Red Cross spokesman described the situation there as “apocalyptic”, saying residents were running out of food, water, heat and electricity.

Ukrainian President Volodymyr Zelenskyy said that even if Russian forces “come into all our cities”, they will meet insurgency. “The problem is that for one soldier of Ukraine, we have 10 Russian soldiers, and for one Ukrainian tank, we have 50 Russian tanks.” 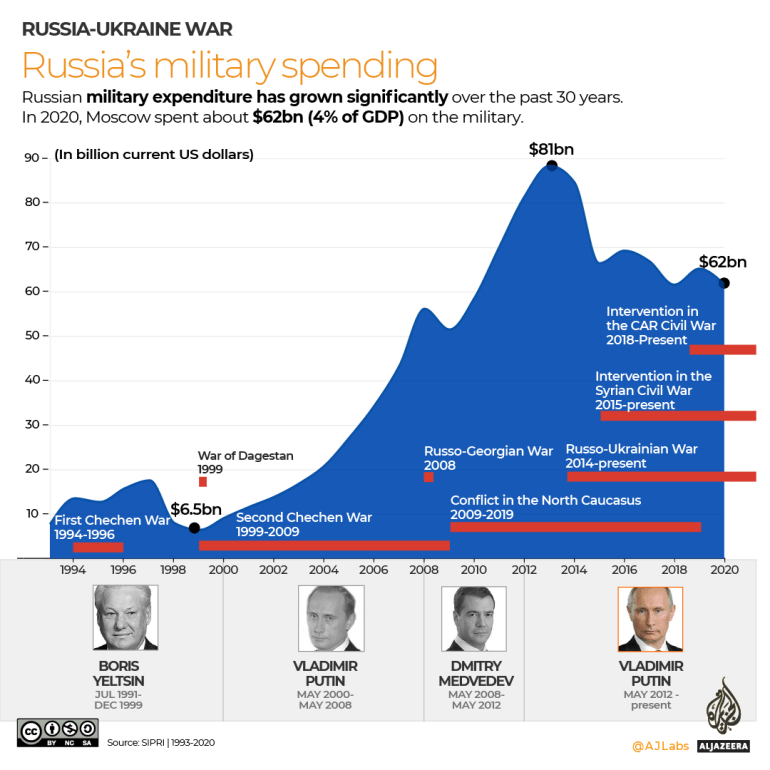 His calls for Western air support have gone unheeded, however, as the US has resisted involving NATO allies directly, prompting an outraged reaction on March 4.

“All the people who die from this day forward will also die because of you, because of your weakness, because of your lack of unity,” Zelenskyy said in a night-time address. “The alliance has given the green light to the bombing of Ukrainian cities and villages by refusing to create a no-fly zone.”

Ukrainian news agency UNIAN said two cruise missiles hit a hospital in Chernihiv, near the Belarusian border, on March 2. The region’s governor said nine people were killed when Russian fighter jets bombed two schools and houses. A massive explosion rocked central Kyiv on the same day. Initial reports were of a rocket striking near the central railway station, where refugees were boarding trains.

In Borodyanka, a small town 60km northwest of Kyiv, there was evidence that Russian forces had targeted civilian infrastructure on March 3, with supermarkets and residential buildings bombed out by tank fire and missiles.

A Chernihiv official posted further evidence that Russia is shelling residential areas on March 5. A photo showed an unexploded 500kg FAB-500 Soviet bomb sticking out of the ground.

Confronted with reports of civilian deaths, Russian Foreign Minister Sergey Lavrov on March 3 said Russian forces “have a strict order only to use high-precision weapons”. The UN sasid that as of March 9, at least 516 civilians had been killed in the war and 908 others wounded, but believed the real numbers to be much higher.

In a hearing before the US House Intelligence Committee, top intelligence officials confirmed suspicions that Putin had underestimated Ukrainian resistance. “He was confident that he had modernised his military and they were capable of a quick, decisive victory at minimum cost,” CIA director William Burns said.

“What [Putin] might be willing to accept as a victory may change over time, given the significant costs he is incurring,” said Director of National Intelligence Avril Haines.

Ukrainian and Western determination have been a surprise to Russia, said Landsman.

Meanwhile, negotiators from Kyiv and Moscow held a third round of talks on March 7, with the two sides agreeing on a plan to open “humanitarian corridors” to allow civilians to flee besieged cities.

Several attempts at evacuations ended in failure as temporary ceasefires did not hold, but Ukrainian officials said thousands fled the northeastern city of Sumy on March 8 via a “humanitarian corridor”, while some civilians escaped from the town of Irpin in the suburbs of Kyiv.

On March 9, a convoy of evacuees left Enerhodar through a humanitarian corridor, the city’s mayor said. Enerhodar is home to the Zaporizhzhia nuclear power plant, the largest facility of its kind in Europe, which was seized by Russian forces on March 4. 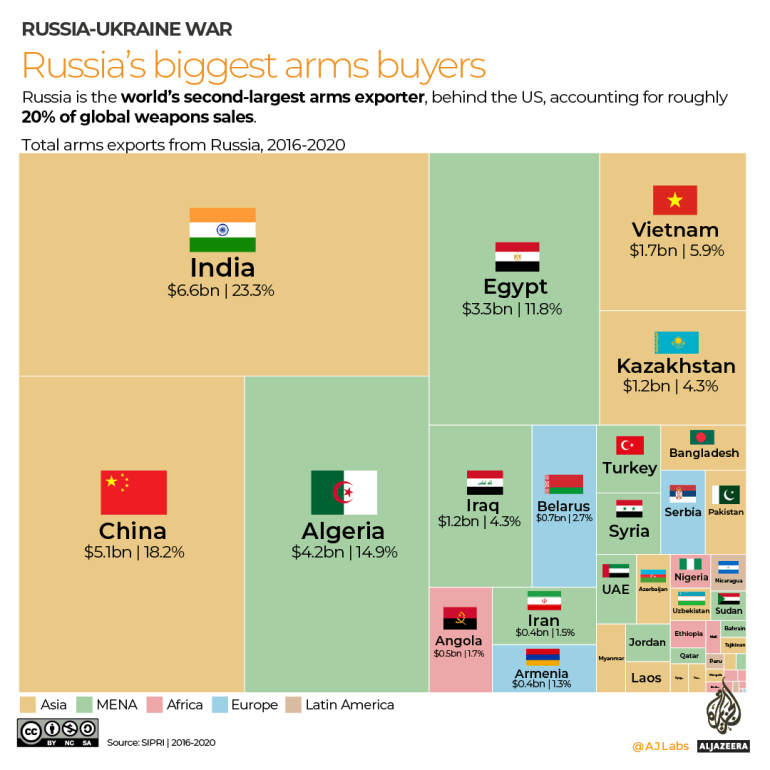 Russian messaging has been bellicose. In a March 3 interview with several television networks, Lavrov said Russia will prosecute its war in Ukraine “to the end”. Russian President Vladimir Putin conveyed a similar message in a phone call with his French counterpart, Emmanuel Macron.

However, it remains unclear what “the end” goal is for Moscow. Konstantinos Filis, who directs the Institute of Global Affairs at the American College of Greece, said a Russian military victory was “more or less a given”.

The question is when it will happen,” he told Al Jazeera. “Russia is greatly superior to Ukraine militarily … Things will be very difficult for the Ukrainians because the Russians have decided to reinforce their troops and their aggression. It may become a bloodbath.”

But Russian officials have said they do not want to occupy Ukraine, only to “demilitarise” and “neutralise” it.

“It’s clever language that leaves quite a lot of room [for interpretation],” said Landsman, suggesting Russia may be looking for a way out of the war. But it would also be a mistake to believe Russia can accept military and diplomatic humiliation, he said.

“Some people think that Russia can be defeated. But it’s not clear what Russia being defeated means. The chances of someone turning up on Putin’s doorstep tomorrow and removing him and replacing him with someone who accepts all of Ukraine’s demands, Western demands, is infinitesimally small. So, there has to be some kind of accommodation of Russia in the end,” said Landsman.