Kharkiv, Ukraine – Kharkiv, Ukraine’s second-largest city has been devastated by Russian air attacks, as the northeastern city home to 1.4 million people has borne the brunt of Moscow’s firepower since the invasion began on February 24.

Streets after streets have been destroyed, filled with rubble, bomb craters and twisted steel after heavy Russian shellings, according to footage captured by the Al Jazeera team on the ground.

The footage shows abandoned cars riddled with holes, scarred from shrapnel and other cars crushed by masonry thrown in the blast, as well as flames still burning in some buildings.

“It’s an absolutely shocking scene of destruction and misery. I am struggling to find words [to describe the situation],” said Al Jazeera’s Charles Stratford, reporting from Kharkiv, located north of the capital, Kyiv.

“This street in central Kharkiv shows just how devastating the effect of Russian bombing of this city has been. An entire street totally destroyed.

“Many of these buildings have people’s homes in them – private residences, flats. Some of them are still smoking. One of the main things that people here tell you is that they can in no way understand how a leader of a country like Russia could do something like this to a city like Kharkiv,” Stratford said.

Taisa, a pensioner from Kharkiv, was in shock as she walked around in a daze, looking at the destroyed businesses and homes. 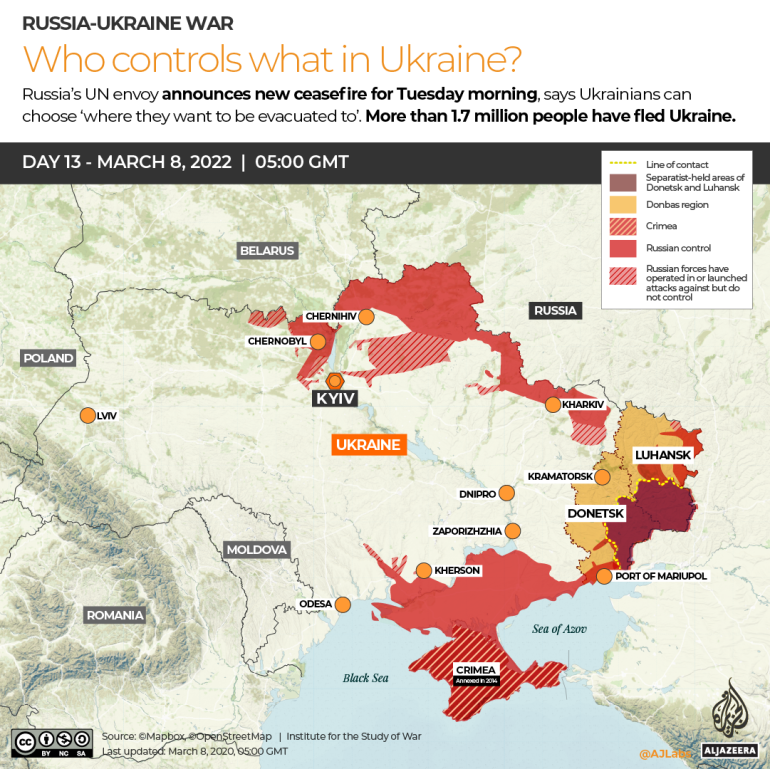 Shrapnels have ripped through the golden spires of an Orthodox church, smashing all its windows.

Many people have been hiding in underground metro stations, where the young and old stand patiently in line for soup, salad and bread served by volunteers.

Alona and her 12-year-old daughter Nastia showed the train carriage where they have been sheltered since their home was destroyed.

Their belongings were neatly arranged where they slept. Nastia sat on a seat and stroked her pet cat lying beside her.

“I thought we would live peacefully in happiness, united but I was wrong,” Nastia told Al Jazeera.

Violetta, 19, was seen in another carriage, rocking her baby son, Bogdan. He was born in hospital two days after the Russian army invaded.

“It’s so difficult. Every day we wash him upstairs. I’m so worried about him getting cold,” Violetta said.

On Tuesday Russia made another attempt to implement “humanitarian corridors” after previous attempts at civilian evacuations failed. The Russian Defence Ministry has said humanitarian corridors have been opened for people to be evacuated from Kyiv, Chernihiv, Sumy, Kharkiv and Mariupol.

The United Nations says Russia’s invasion has triggered the fastest-growing refugee crisis in Europe since World War II. More than 1.7 million people have fled the conflict since Russia launched its full-scale invasion of Ukraine.