The last sections of a high-security fence surrounding the United States Capitol in Washington, DC, are being removed on Friday, six months after supporters of former President Donald Trump overran the building in a riot.

The two-and-half metre high, black-mesh fencing was thrown up by authorities in the aftermath of the attack on Congress and had at one point surrounded several blocks around the Capitol complex, blocking normal pedestrian and vehicle traffic.

In the months following, the fence has been gradually withdrawn as security around the Capitol returned to normal over time. The sections that still stand enclose the white-domed Capitol and the chambers of the House of Representatives and Senate.

The fallout from the January 6 riot continues to divide US politics as Democrats and some Republicans pursue an investigation of Trump’s potential role in what FBI has labelled “domestic terrorism” and the former president continues to assert broad influence over the Republican Party.

The decision to take down the remaining fence was based on the US Capitol Police’s assessment of the current threat and improved coordination with local and federal law enforcement agencies, according to US House of Representatives Sergeant-at-Arms William Walker.

More than 535 people, including members of the Oath Keepers group, have been charged with taking part in the attack on January 6, when Trump supporters smashed windows, fought police, attacked journalists and sent lawmakers and then-Vice President Mike Pence scrambling for safety.

US prosecutors arrested a group of Florida residents on July 8 and charged them with attacking police officers during the deadly January 6 siege, according to court documents.

Four people from the Tampa Bay area were arrested on June 30, prosecutors said. A fifth person has not been apprehended yet. Justice Department lawyers said the defendants attacked police officers using makeshift weapons like stolen riot shields and flagpoles.

Five people died during the violence and the day after, including a Capitol Police officer. Two police officers who took part in the defence of the Capitol later took their own lives. More than a hundred police officers were injured.

Democrat Senator Sherrod Brown on Wednesday for the first time shared photos of some of the damage done inside the building.

This is the first time I’m sharing my photos from January 6th.

I took these exactly six months ago – the morning after the insurrection.

This is what I saw in the Capitol. pic.twitter.com/1atviIbBwa

House Speaker Nancy Pelosi, a Democrat, announced on June 24 a special committee would investigate the attack on the US Capitol, saying it is “imperative that we seek the truth”. The new committee comes after Senate Republicans blocked a House-passed bill that would have set up a bipartisan commission to investigate the January 6 events.

The rioters were trying to stop Congress from certifying President Joe Biden’s election victory, which Trump has falsely said was the result of widespread fraud. Multiple courts, state election officials and members of Trump’s own administration have rejected his claims as unfounded.

Trump continues to claim the election was stolen from him by fraudulent voting in key states.

Some 20,000 National Guard troops were called into the city to defend the building, with the last contingent not leaving until May.

The temporary fencing can quickly be reinstalled if needed and other restrictions on access to the Capitol would remain in place. Tourists and other visitors remain barred from entering the Capitol due to restrictions for the COVID-19 pandemic.

In March, a task force studying security failures on January 6 recommended the creation of a rapid-reaction force in Washington, DC, and upgrades to Capitol Police intelligence capabilities and training. 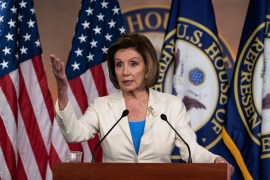 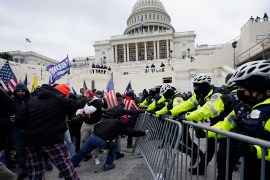 Paul Allard Hodgkins is the second to plead guilty so far, admitting he was on the Senate floor during the riot. 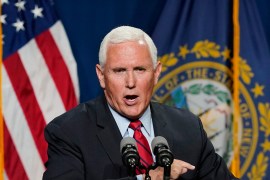 A ‘dark day’ in US history, but the former vice president is still ‘proud’ of his accomplishments with Trump. 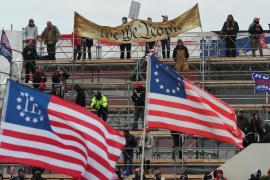 A former police chief is among the six men involved in the militia group facing federal conspiracy charges.