Israel has reduced the fishing zone off Gaza by half, defence officials said, after incendiary balloons launched from the Palestinian enclave caused fires in Israel.

“It has been decided to reduce the fishing zone in the Gaza Strip from 12 nautical miles to six nautical miles,” the Israeli military branch responsible for civil affairs in the occupied Palestinian territories (COGAT) said on Sunday.

“The decision was made following the continued launching of incendiary balloons from the Gaza Strip towards Israel, which constitutes a violation of Israeli sovereignty,” it said in a statement.

Under the 1993 Oslo Accords, Israel is obligated to permit fishing off the Gaza Strip’s coast to to 20 nautical miles, but this has never been implemented. Several human rights groups have described the reduction of the fishing zone as a “punitive measure” that constitutes collective punishment, which causes great uncertainty and insecurity.

Earlier on Sunday, Israeli firefighters said they extinguished brush blazes “in three points in a small area in the Eshkol region”, noting that investigations had “determined the cause as being incendiary balloons”.

On July 12, Israel announced it was expanding the fishing zone off Gaza and allowing additional imports into the Palestinian territory in the light of the “recent security calm”.

The latest launch of incendiary balloons came two months after an 11-day Israeli assault on Gaza, raising the prospect of renewed Israeli attacks on the Hamas-run territory.

Prior to the May conflict, the Gaza fishing zone was 15 nautical miles.

The May offensive killed at least 260 Palestinians, including 66 children, and caused widespread damage to infrastructure and residential areas. On the Israeli side, 13 people, including two children, were killed by rockets fired from Palestinian armed groups in the coastal enclave.

The Gaza Rapid Damage and Needs Assessment (RDNA) report published earlier this month estimated that the damage caused by the 11-day bombardment was between $290m and $380m, while the recovery needs are projected at between $345m and $485m.

Israel has done little to ease a crippling blockade on the territory since the fighting ended, and Hamas has lamented delays in indirect negotiations with Israel to resume Qatari financial aid to Gaza.

The Gaza Strip is one of the world’s most densely populated areas, where two million Palestinians – half of them below the age of 18 – live in 365 square kilometres (141sq miles) of the coastal territory. It has been under blockade by Egypt and Israel for 14 years, which resulted in a dire humanitarian situation that a UN report had predicted would be “unliveable” in 2020.

At least 800,000 people do not have access to clean water, and electricity runs for only a few hours a day. Furthermore, the coronavirus pandemic has exacerbated an already weak healthcare system, with medical equipment and medicine in short supply.

The previous time balloons from Gaza caused a fire in Israel was July 2. 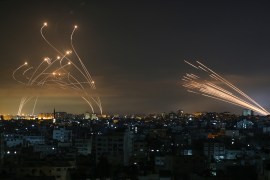 Widespread reluctance to get a shot led officials and medics to launch campaign about positive effects of vaccination. 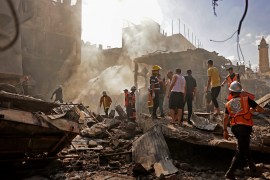 Explosion in Gaza market kills one; cause unknown

Incident at Zawiya market leaves 10 others wounded, some in critical condition.